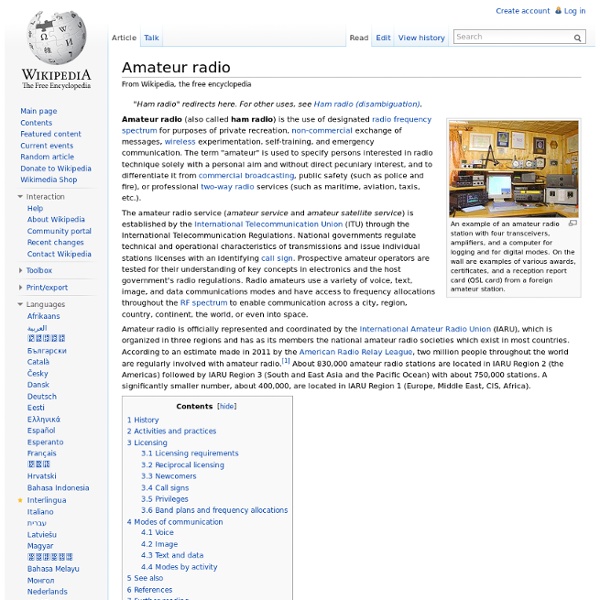 An example of an amateur radio station with four transceivers, amplifiers, and a computer for logging and for digital modes. On the wall are examples of various awards, certificates, and a reception report card (QSL card) from a foreign amateur station. Amateur radio (also called ham radio) is the use of designated radio frequency spectra for purposes of private recreation, non-commercial exchange of messages, wireless experimentation, self-training, and emergency communication. The term "amateur" is used to specify persons interested in radio technique solely with a personal aim and without direct monetary or other similar reward, and to differentiate it from commercial broadcasting, public safety (such as police and fire), or professional two-way radio services (such as maritime, aviation, taxis, etc.). History[edit] An amateur radio station in the United Kingdom. Ham radio[edit] Activities and practices[edit] Licensing[edit] The top of a tower supporting a yagi and several wire antennas Related:  rod57

United States Military Telegraph - Morse Code Files The USMT CW Communicator Ionosphere server! Use our server address of "cw.trwagner.org" in your CW Communicator program! Practice CW, DOT or any version of MorseCode you choose. CW Comm is an excellent "live" or "real time" internet morse code program made by MRX Software. To help promote all versions of morse code, we've provided some links on the right-hand side of the page that may be useful. Below are some reviews of the programs above. CWirc, by Pierre-Philippe Coupard, is a plugin for the X-Chat IRC client to transmit raw morse code over the internet using IRC servers as reflectors. A brief note about CWirc; CWirc is quite flexible. Ham Univesity is another great tool for learning and practicing morse code. MorseAcademy is a good tool for learning and practicing morse code. MorseMail is a simple program which will allow you to send recordings or "numerical" representations of morse code through the clicks of your mouse via email. MRX Morse Code is also made by MRX Software. Return

How to Remove Trovi / Conduit / Search Protect Browser Hijack Malware If your computer has been hijacked with an obnoxious malware that won’t let you change your home page, there’s a strong chance you’ve been infected with the Trovi Search Protect malware, which used to be known as Conduit. Here’s how to remove it. How do you know this is malware? How Did You Get Infected? Usually at some point you made the huge mistake of trusting a site like Download.com, which bundled it into an installer for a completely different application. They get around the legality issue with their long terms of service that nobody reads and by making sure there’s actually a way to uninstall the thing. Removing the Trovi Search Protect Malware This is really sad to say, but it’s actually important to use the Search Protect panel to turn off the bad settings first before uninstalling it. In here, change your Home Page back to Google or whatever you want. Now change your New Tab page back to Browser Default. Change your Default Search back to “Browser default search engine.”

Katy Amateur Radio Society Code Practice Files Text Source for W1AW Web Code Practice Files for April 15 and 16, 2014: Text for the 5 to 15 WPM runs comes from December 2012 QST, page 59. Text for the 20 to 40 WPM runs comes from September 2013 QST, page 49. The various archive files are available from the following links. The 18 WPM is a "transition" file to help bridge the gap from 15 to 20 WPM. This particular file is actually part of the W1AW CW bulletin from previous weeks. The 40 WPM file is composed of texts taken from the lower speed files. The various TEXT files contain the actual code practice text used in each run. Please note the tone frequency is 750 Hz. Joe Carcia, NJ1Q - nj1q@arrl.org

Welcome to Ford Owner | Official Ford Owner Site Programmer British countess and mathematician Ada Lovelace is considered the first computer programmer, as she was the first to write and publish an algorithm intended for implementation on Charles Babbage's analytical engine, in October 1842, intended for the calculation of Bernoulli numbers.[8] Lovelace was also the first person to comment on the potential for computers to be used for purposes other than computing calculations. Because Babbage's machine was never completed to a functioning standard in her time, she never saw her algorithm run. The first person to run a program on a functioning modern electronically based computer was computer scientist Konrad Zuse, in 1941. The ENIAC programming team, consisting of Kay McNulty, Betty Jennings, Betty Snyder, Marlyn Wescoff, Fran Bilas and Ruth Lichterman were the first regularly working programmers.[9][10] Nature of the work[edit] Programmers in the Yandex headquarters. Testing and debugging[edit] Application versus system programming[edit]

ScreenPlay The MediaWiki ScreenPlay Extension (ScreenPlay) is a text-formatting add-on which allows screenwriters and hobbyists the ability to use MediaWiki as a screenwriting tool. Synopsis[edit | edit source] <screenplay>An example is described</screenplay><scene int day>A '''Darkened''' Room</scene> [[Bob Ross|BOB]] sits in front of a computer screen. ;bob :Hello friends, I'm so glad you could join us. Will produce the following type of formatting: Note how word case has been adjusted in certain cases. Description[edit | edit source] ScreenPlay supports three new editing hooks to add style codes that visually re-format certain wiki syntax (specifically, those used for definition lists, or "dl's") into proper screenplay format. Though ScreenPlay is not a replacement for a full-featured ScreenWriting software package, it offers a number of advantages for screenwriters: Usage[edit | edit source] Installing ScreenPlay is as easy as installing any other MediaWiki extension. Hooks[edit | edit source]