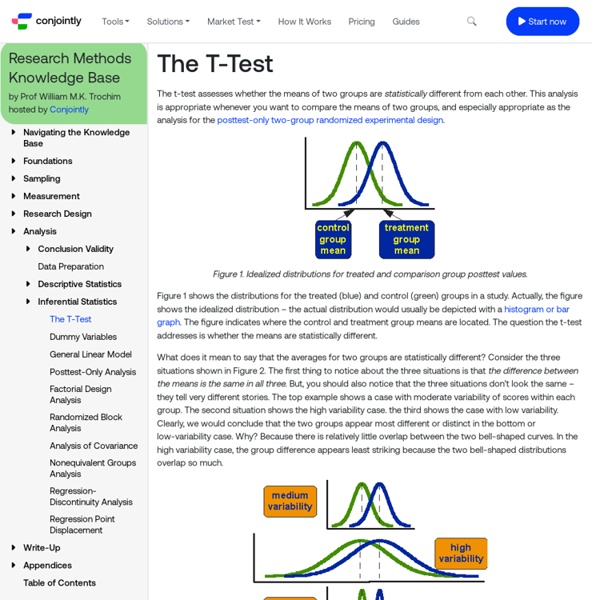 « PreviousHomeNext » The t-test assesses whether the means of two groups are statistically different from each other. This analysis is appropriate whenever you want to compare the means of two groups, and especially appropriate as the analysis for the posttest-only two-group randomized experimental design. Figure 1 shows the distributions for the treated (blue) and control (green) groups in a study. What does it mean to say that the averages for two groups are statistically different? This leads us to a very important conclusion: when we are looking at the differences between scores for two groups, we have to judge the difference between their means relative to the spread or variability of their scores. The formula for the t-test is a ratio. The top part of the formula is easy to compute -- just find the difference between the means. Remember, that the variance is simply the square of the standard deviation. The final formula for the t-test is shown in Figure 5:

Independent Groups t-test: Chapter 10 Independent Groups t-test: Chapter 10 Strength of the Relationship (10.3) - For the example we computed in class, we found a statistically significant difference – there is a “statistically significant relationship” between test-taking strategy (fake v. honest) and personality test scores. - Our next question is: since a relationship exists, how strong is this relationship? - Question addresses the issue of “practical significance” or “real-world significance” - One way to address question is to try to interpret the difference between means directly. - We know our best estimate of this difference is 5.300, in raw-score units. - May be o.k. when have implicit knowledge of distribution (e.g., income) of DV - Problem with most DVs – we are not informed of distribution - What is the meaning of a 5.3 unit difference in personality scores? - Another way of judging how strongly the IV and DV are associated, or related, to one another is to compute “eta-squared” (eta2 or where df = n1 + n2 – 2 to

Genes may travel from plant to plant to fuel evolution Evolutionary biologists at Brown University and the University of Sheffield have documented for the first time that plants swap genes from plant to plant to fuel their evolutionary development. The researchers found enzymes key to photosynthesis had been shared among plants with only a distant ancestral relationship. The genes were incorporated into the metabolic cycle of the recipient plant, aiding adaptation. Results appear in Current Biology. The evolution of plants and animals generally has been thought to occur through the passing of genes from parent to offspring and genetic modifications that happen along the way. How this happened is unclear. "People were wondering how these genes evolved. To test the hypothesis, the scientists took a wider view, surveying C4 plants in which the ppc enzyme was integral to photosynthesis and plants where the enzyme was present but had no photosynthetic role. Scientists call this evolutionary event "lateral gene transfer."

ONE-WAY ANOVA Analysis of variance (ANOVA) for comparing means of three or more variables. Use this test for comparing means of 3 or more samples/treatments, to avoid the error inherent in performing multiple t -tests Background. If we have, say, 3 treatments to compare (A, B, C) then we would need 3 separate t -tests (comparing A with B, A with C, and B with C). If we had seven treatments we would need 21 separate t -tests. Ideally, for this test we would have the same number of replicates for each treatment , but this is not essential. An important assumption underlies the Analysis of Variance: that all treatments have similar variance . Procedure (see worked example ) Don't be frightened by this! Assume that we have recorded the biomass of 3 bacteria in flasks of glucose broth, and we used 3 replicate flasks for each bacterium. Step 1 . Step 2 . , S x 2 , and S d 2 ( click here for method ) Step 3 . Step 4 . Step 5 . and call the sum B . Step 6. Step 7. Step 8 . Step 9 . Step 10 . Step 11 . Step 12 .

Standard deviations and standard errors Douglas G Altman (doug.altman@cancer.org.uk), professor of statistics in medicine1, J Martin Bland, professor of health statistics2 Author Affiliations Correspondence to: Prof Altman The terms “standard error” and “standard deviation” are often confused.1 The contrast between these two terms reflects the important distinction between data description and inference, one that all researchers should appreciate. The standard deviation (often SD) is a measure of variability. Portal:Biology Adenanthos obovatus, commonly known as basket flower or jugflower. Clinton Richard Dawkins, is a British ethologist, evolutionary biologist and author. He is an emeritus fellow of New College, Oxford, and was the University of Oxford's Professor for Public Understanding of Science from 1995 until 2008. Dawkins came to prominence with his 1976 book The Selfish Gene, which popularised the gene-centered view of evolution and introduced the term meme. Dawkins is an atheist and humanist, a Vice President of the British Humanist Association and supporter of the Brights movement.

Stats: Two-Way ANOVA The two-way analysis of variance is an extension to the one-way analysis of variance. There are two independent variables (hence the name two-way). Assumptions The populations from which the samples were obtained must be normally or approximately normally distributed. Hypotheses There are three sets of hypothesis with the two-way ANOVA. The null hypotheses for each of the sets are given below. The population means of the first factor are equal. Factors The two independent variables in a two-way ANOVA are called factors. Treatment Groups Treatement Groups are formed by making all possible combinations of the two factors. As an example, let's assume we're planting corn. The data that actually appears in the table are samples. Main Effect The main effect involves the independent variables one at a time. Interaction Effect The interaction effect is the effect that one factor has on the other factor. Within Variation The Within variation is the sum of squares within each treatment group. F-Tests

History of Normal Distribution History of the Normal Distribution Author(s) David M. Prerequisites Distributions, Central Tendency, Variability, Binomial Distribution In the chapter on probability, we saw that the binomial distribution could be used to solve problems such as "If a fair coin is flipped 100 times, what is the probability of getting 60 or more heads?" where x is the number of heads (60), N is the number of flips (100), and π is the probability of a head (0.5). Abraham de Moivre, an 18th century statistician and consultant to gamblers, was often called upon to make these lengthy computations. de Moivre noted that when the number of events (coin flips) increased, the shape of the binomial distribution approached a very smooth curve. Figure 1. de Moivre reasoned that if he could find a mathematical expression for this curve, he would be able to solve problems such as finding the probability of 60 or more heads out of 100 coin flips much more easily. Figure 2.

t Test We are called on many times to determine if the mean performance of two groups are significantly different. Those two groups might be students, cattle, plants, or other objects. When attempting to determine if the difference between two means is greater than that expected from chance, the "t" test may be the needed statistical technique. If the data is from a normal population and at least ordinal in nature, then we are surer that this is the technique to use. If you wish to generalize to a population, then the samples must be representative. "t" is the difference between two sample means measured in terms of the standard error of those means, or "t" is a comparison between two groups means which takes into account the differences in group variation and group size of the two groups. Separate variance formula Use the separate variance formula if: Pooled Variance Formula Use the pooled variance formula if: Correlated Data Formula

Post Hoc Tests for One-Way ANOVA Post Hoc Tests for One-Way ANOVA (Jump to: Lecture | Video ) Remember that after rejecting the null hypothesis in an ANOVA, all you know is that the groups you compared are different in some way. Imagine you performed the following experiment and ended up rejecting the null hypothesis: Researchers want to test a new anti-anxiety medication. Now that we’ve rejected the null hypothesis, it is appropriate to perform a Post-Hoc test to discover where the three groups are different. In this lecture, we'll be examining two different tests: Tukey HSD, and Scheffe. The Tukey test is more liberal than the Scheffe test. Tukey HSD With this test, we’re interested in examining mean differences. Next, we calculate our HSD (Honestly Significant Difference) Figure 4. For this equation, we need MSwithin from our ANOVA source table, as well as our n. Now, we measure how far each mean is from each other mean. Here, we find that all three means are different from one another. Scheffe Reject the null hypothesis.