70 Reminders to Help You Break Any Barrier 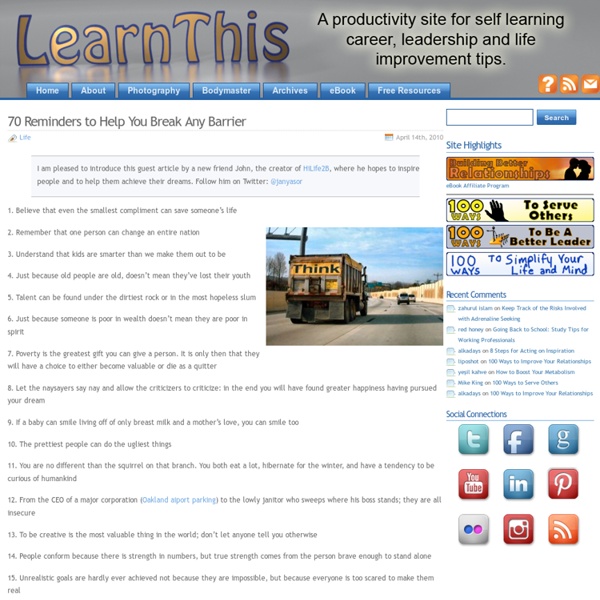 10 Life-Enhancing Things You Can Do in Ten Minutes or Less It usually takes us much longer to change our moods than we’d like it to take. Here are ten things you can do in ten minutes or less that will have a positive emotional effect on you and those you love. . See it online at Oprah.com . How To Actually Win A Fist Fight Ok, well, with the response from yesterday's post, I felt compelled to go ahead and do this. Without further ado: You know it has to be said, first sentence, first paragraph: the best way to win a fist fight is not to get into one in the first place. No shit, sherlock. Every single mens magazine who has ever attempted to publish an article like this has started (and ended) exactly that way and is usually devoid of any real information - sometimes because someone on the editorial staff wanted to avoid putting the periodical at risk for a lawsuit; other times because the author has absolutely no clue what they’re talking about, so they cop out with this “Verbal Judo Wins The Day!”

100 Ways to Serve Others I’ve continued to be inspired by people’s 100 lists and you’ve probably seen many that I’ve highlighted in recent resource lists. Dragos wrote one that triggered me to write another with his excellent post on 100 tips to write huge lists. This list is on my favorite subject and while the length of these lists makes them quite a challenge to make, this particular subject is one I’ve spent a lot of time thinking about and writing goals in so its a great topic for me to tackle in a list. The items were actually fairly easy to come up for me without any research or added web surfing, but the real effort was then in putting a short description or example for each. Anyway, I’m thrilled to have this list completed and can’t wait to experience and see the results of personally doing every single one on the list. That is the challenge I made for myself and I hope you challenge yourself with some or all of these items as well.

7 Ways to Enhance Focus, Creativity, Productivity and Performance Back in my corporate lawyer days, there was one guy who everyone hated. Not because he was mean or underhanded or cut-throat. He was actually quite nice and always willing to help. People hated him because he was good. 25 Acts of Body Language to Avoid Our body language exhibits far more information about how we feel than it is possible to articulate verbally. All of the physical gestures we make are subconsciously interpreted by others. This can work for or against us depending on the kind of body language we use. Some gestures project a very positive message, while others do nothing but set a negative tone. Most people are totally oblivious to their own body language, so the discipline of controlling these gestures can be quite challenging.

28 Dignified Ways to Impress Everyone Around You post written by: Marc Chernoff Email Far more often than any of us like to admit, our actions are driven by an inner desire to impress other people. 20 Tree House Pictures: Play-Club Plans to Big-Kid Houses Treehouses are more popular than ever, as play spaces for children but also as luxury hotel (and even house) designs for adults. Some of the most fantastic plans and ideas can be traced to specialist designers and builders – and pictures of their work can provide some of the best inspiration (as well as an informal visual guide) for do-it-yourself recreational, residential and commercial tree buildings. Blue Forest is one such company, but far from the only one.

Victims of Sexual Abuse background="/bg2/chalk.jpg"> It is very important that when a victim of sexual abuse comes forth and reports the crime to family, friends, law enforcement, and others, that he or she be listened to in the most sincere fashion possible. Studies have shown that the most credible account of what occurred during a rape or child molestation comes from the victim him/herself. Studies suggest that approximately 3-5% of all rape or child molestation allegations that are reported are false...Therefore, nearly 95% are based on a factual incident. The Cheapskate Guide: 50 Tips for Frugal Living Post written by Leo Babauta. Follow me on Twitter. Confession time: I’m a cheapskate.