Some rules i try to live by: 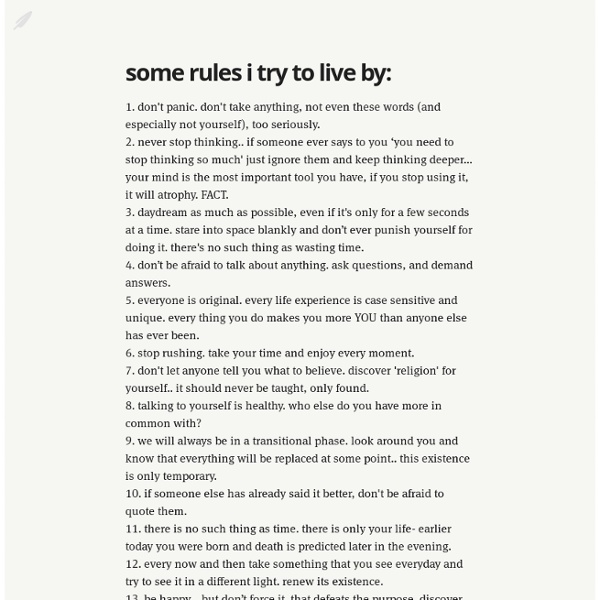 111 Lessons Life Taught Us post written by: Marc Chernoff Email Sometimes thinking about your life and sorting out what you have learned is just as important as tackling a new venture. That’s what our new sister site, Everyday Life Lessons, is all about. The 48 Laws of Power Background[edit] Greene initially formulated some of the ideas in The 48 Laws of Power while working as a writer in Hollywood and concluding that today's power elite shared similar traits with powerful figures throughout history.[5] In 1995, Greene worked as a writer at Fabrica, an art and media school, and met a book packager named Joost Elffers.[4][8] Greene pitched a book about power to Elffers and six months later, Elffers requested that Greene write a treatment.[4] Although Greene was unhappy in his current job, he was comfortable and saw the time needed to write a proper book proposal as too risky.[10] However, at the time Greene was rereading his favorite biography about Julius Caesar and took inspiration from Caesar's decision to cross the Rubicon River and fight Pompey, thus inciting the Great Roman Civil War.[10] Greene would follow Caesar's example and write the treatment, which later became The 48 Laws of Power.[10] He would note this as the turning point of his life.[10]

10 Sentences that Can Change Your Life The power of a sentence is tremendous. A single destructive sentence can ruin somebody’s life, make your day, or change your mood. Fortunately, there are some sentences that can give us power to go on. Edit your photos - Google+ Help Note: To edit photos on your computer, you'll need Chrome. Basic edits To get started, add a photo to Google+ then click a photo to view it in the full screen lightbox view. 88 Important Truths I’ve Learned About Life Everyone gets drilled with certain lessons in life. Sometimes it takes repeated demonstrations of a given law of life to really get it into your skull, and other times one powerful experience drives the point home once forever. Here are 88 things I’ve discovered about life, the world, and its inhabitants by this point in my short time on earth. 1.

Top 10: Conversation Etiquette Mistakes photo: *clairity* We’re all capable of the occasional social blunder. Of course, some of us seem more prone to it than others, but even the savviest people aren’t impervious to such gaffes. And no scenario is richer with these potential faux pas than the everyday conversation, in which you can say the wrong thing, do the wrong thing, and occasionally spit on others when trying to pronounce nouns with German etymology. No worries. 25 Great Quotes to Inspire and Brighten Your Day Here’s a collection of great quotes by some of the most inspirational men and women that ever walked this earth. Hopefully you’ll find them inspirational in some way. If you do like them and find them helpful, check out our similar posts by visiting the links listed below. We have created over 20+ of these galleries, so there is lots more to be seen. Also, be sure to inspire your friends, family and coworkers by sharing some great quotes with them.

What You Cant Say - StumbleUpon January 2004 Have you ever seen an old photo of yourself and been embarrassed at the way you looked? Did we actually dress like that? We did. How To… Embed This Infographic <a href= ‎"><img src=" title="10 How Tos" alt="How To Infographic" border="0" class="nopin" /></a><br />Source: <a href=' title='Interesting Facts'><a href=' title='Interesting Facts'>Today I Found Out</a></a> 1) How to drastically increase the life of your shaving razor

25 TED Talks that will change how you see the world Mahatma Gandhi once said, “Live as if you were to die tomorrow. Learn as if you were to live forever.” If this sounds like a philosophy you can relate to, then you’ll love TED talks. These informational 17 minute presentations are given at annual conferences by some of the world’s greatest thinkers.