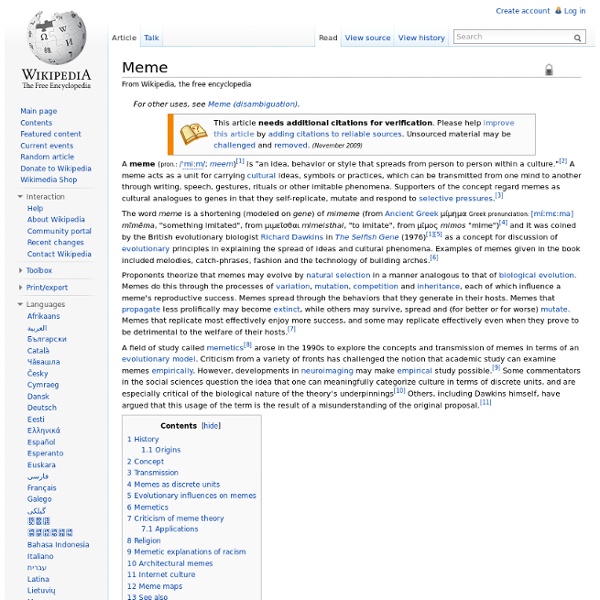 A meme (/ˈmiːm/ meem)[1] is "an idea, behavior, or style that spreads from person to person within a culture."[2] A meme acts as a unit for carrying cultural ideas, symbols, or practices that can be transmitted from one mind to another through writing, speech, gestures, rituals, or other imitable phenomena with a mimicked theme. Supporters of the concept regard memes as cultural analogues to genes in that they self-replicate, mutate, and respond to selective pressures.[3] The word meme is a shortening (modeled on gene) of mimeme (from Ancient Greek μίμημα Greek pronunciation: [míːmɛːma] mīmēma, "imitated thing", from μιμεῖσθαι mimeisthai, "to imitate", from μῖμος mimos "mime")[4] and it was coined by the British evolutionary biologist Richard Dawkins in The Selfish Gene (1976)[1][5] as a concept for discussion of evolutionary principles in explaining the spread of ideas and cultural phenomena. Dawkins' own position is somewhat ambiguous: he obviously welcomed N. History[edit]

Meme - Criticism Of Memetic Theory - York, Oxford, Press, Memetics, Human, and Memes Despite the cult popularity of the idea, memetic theory is hardly discussed in recent texts on evolutionary psychology and linguistics. The prevailing consensus seems to be that the meme is a nice metaphor but one that has perhaps been taken too far. Memes, after all, are hard to define, quantify, and measure; their very existence is somewhat nebulous, inferable but not scientifically verifiable. Some have also assailed memes not only as bad science but as reactionary politics. The complexity of human development is overly reduced into nonmaterialist, quasi-mystical, pseudo-scientific terms, which in turn are only a new Kabbalah, a recasting of age-old ideas of angels and demons and magic words that can control reality.

Encephalitis lethargica Encephalitis lethargica or von Economo disease is an atypical form of encephalitis. Also known as "sleepy sickness" (though different from the sleeping sickness transmitted by the tsetse fly), it was first described by the neurologist Constantin von Economo in 1917.[1][2] The disease attacks the brain, leaving some victims in a statue-like condition, speechless and motionless.[3] Between 1915 and 1926,[4] an epidemic of encephalitis lethargica spread around the world; no recurrence of the epidemic has since been reported, though isolated cases continue to occur.[5][6] Symptoms[edit] Encephalitis lethargica is characterized by high fever, sore throat, headache, lethargy, double vision, delayed physical and mental response, sleep inversion and catatonia.[3] In severe cases, patients may enter a coma-like state (akinetic mutism).

Pebble Kickstarter Watch Will Be At CES Pebble, the smartphone-friendly watch that raised over $10 million on Kickstarter — $500,000 in the first day alone — will be at CES 2013. The Pebble is the most successful Kickstarter project of all-time, with nearly 69,000 backers — myself included. Users were drawn to the promise of the product, a wrist watch that syncs with your iPhone or Android smartphone. The idea is that you can receive notifications and access content from your phone — and its apps — via your watch.

Ampakine Ampakines are a class of compounds known to enhance attention span and alertness, and facilitate learning and memory. The ampakines take their name from the glutamatergic AMPA receptor with which they strongly interact. The AMPA receptor, in turn, gets its name from AMPA, which selectively binds to it. Ampakines have been investigated by DARPA for potential use in increasing military effectiveness.[1] Effects[edit] Unlike earlier stimulants (e.g. caffeine, methylphenidate (Ritalin), and the amphetamines), ampakines do not seem to have unpleasant, long-lasting side effects such as sleeplessness. Memetic Engineering memes mind seen idea To add to the confusion, the modern world has seen an unprecedented multiplication and proliferation of memes, with mass media being the preeminent transmission vector. Some of these memes are devised with rational ends, such as advertising consumer products; others are devised solely as play; others are "junk" memes. Hula hoops, the Burma Shave billboards of the 1950s, the slogan "There's always room for Jell-O," the synthesizer intro to the 1984 song "Jump" by Van Halen, or the three-note "by Men-nen" jingle, while of no use to those they infect, are excellent examples.

Oliver Sacks Oliver Wolf Sacks, CBE (born 9 July 1933) is a British-American neurologist, writer, and amateur chemist who is Professor of Neurology at New York University School of Medicine. Between 2007 and 2012, he was professor of neurology and psychiatry at Columbia University, where he also held the position of "Columbia Artist". Before that, he spent many years on the clinical faculty of Yeshiva University's Albert Einstein College of Medicine. He also holds the position of visiting professor at the United Kingdom's University of Warwick.[1] Early life[edit] FCC Approves The Pebble Watch, So Where Is It? Although its creators have yet to announce a solid release date, the Pebble watch has received approval from the Federal Communications Commission. This news comes soon after it was rumored that Apple was prepping their own smart watch, according to AllThingsD. The Pebble watch, which received more than $10 million in funding through Kickstarter, has been heavily anticipated. However, after a September ship date was missed, many have worried that the iPhone accessory would never see the light of day. FCC approval almost certainly means that Pebble is on track for release.

List of Internet phenomena This is a partial list of social and cultural phenomena specific to the Internet, such as popular themes, catchphrases, images, viral videos, jokes, and more. When such fads and sensations occur online, they tend to grow rapidly and become more widespread because the instant communication facilitates word of mouth. Advertising Animation and comics Evan and Gregg Spiridellis, founders of JibJab The adult brony fans of My Little Pony: Friendship Is Magic grew from its 4chan roots

Tower of Babel The Tower of Babel (/ˈbæbəl/ or /ˈbeɪbəl/; Hebrew: מִגְדַּל בָּבֶל‎, Migddal Bāḇēl) is a story told in the Book of Genesis of the Tanakh (also referred to as the Hebrew Bible or the Old Testament) meant to explain the origin of different languages.[1][2][3][4] According to the story, a united humanity of the generations following the Great Flood, speaking a single language and migrating from the east, came to the land of Shinar (Hebrew: שנער‎). There they agreed to build a city and tower; seeing this, God confounded their speech so that they could no longer understand each other and scattered them around the world. The Tower of Babel has been associated with known structures according to some modern scholars, notably the Etemenanki, a ziggurat dedicated to the Mesopotamian god Marduk by Nabopolassar, king of Babylonia (c. 610 BCE).[5][6] The Great Ziggurat of Babylon was 91 metres (300 ft) in height. Story German Late Medieval (c. 1370s) depiction of the construction of the tower.

Milgram experiment The experimenter (E) orders the teacher (T), the subject of the experiment, to give what the latter believes are painful electric shocks to a learner (L), who is actually an actor and confederate. The subject believes that for each wrong answer, the learner was receiving actual electric shocks, though in reality there were no such punishments. Being separated from the subject, the confederate set up a tape recorder integrated with the electro-shock generator, which played pre-recorded sounds for each shock level.[1] Internet of Things The Internet of Things (IoT) is the network of physical objects or "things" embedded with electronics, software, sensors and connectivity to enable it to achieve greater value and service by exchanging data with the manufacturer, operator and/or other connected devices. Each thing is uniquely identifiable through its embedded computing system but is able to interoperate within the existing Internet infrastructure. The term “Internet of Things” was first documented by a British visionary, Kevin Ashton, in 1999.[1] Typically, IoT is expected to offer advanced connectivity of devices, systems, and services that goes beyond machine-to-machine communications (M2M) and covers a variety of protocols, domains, and applications.[2] The interconnection of these embedded devices (including smart objects), is expected to usher in automation in nearly all fields, while also enabling advanced applications like a Smart Grid.[3]