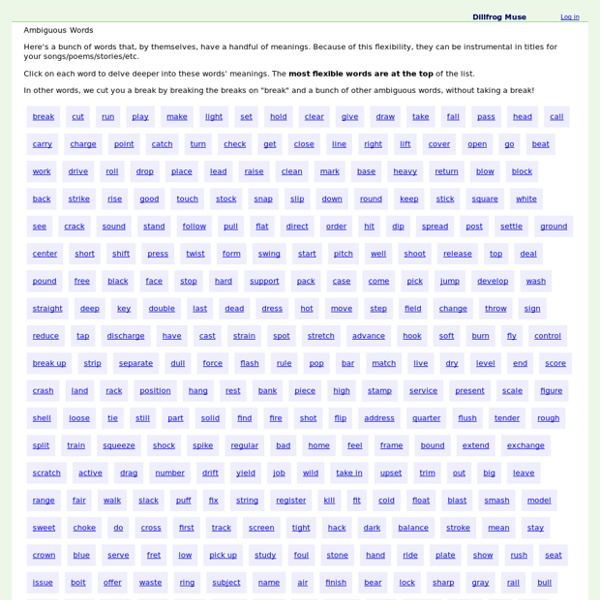 Ambiguous Words Here's a bunch of words that, by themselves, have a handful of meanings. Because of this flexibility, they can be instrumental in titles for your songs/poems/stories/etc. Click on each word to delve deeper into these words' meanings. The most flexible words are at the top of the list. In other words, we cut you a break by breaking the breaks on "break" and a bunch of other ambiguous words, without taking a break! Word meaning database kindly provided by WordNet

100 Words for Facial Expressions By Mark Nichol Face it — sometimes you must give your readers a countenance-based clue about what a character or a subject is feeling. First try conveying emotions indirectly or through dialogue, but if you must fall back on a descriptive term, try for precision: T'HY'LA: I went to the Harry Potter studio tour! Well I finally went on friday, and it was uh-may-zing. There are honestly no words for it. I took 300 and something photos but I don't want to give it away to anyone who might be going so here are a few that I put on instagram.

Cliche Finder Have you been searching for just the right cliché to use? Are you searching for a cliché using the word "cat" or "day" but haven't been able to come up with one? Just enter any words in the form below, and this search engine will return any clichés which use that phrase... Over 3,300 clichés indexed! What exactly is a cliche?See my definition Do you know of any clichés not listed here?

HOW TO WRITE GOOD Caveat emptor. Carpe diem. O si villi, si ergo, fortibus es in ero. Idioms – as clear as mud? Miranda Steel is a freelance ELT lexicographer and editor. She has worked as a Senior Editor for dictionaries for learners at OUP and has also worked for COBUILD. In this post, she looks at some of the weird and wonderful idioms in the English language. Idioms are commonly used in spoken and written English. They add colour and interest to what we are saying. But how often do we actually find idioms in their original and full form?

Lost in Budapest, Found in a Ruin Bar It’s surprising, how many movies were shot in Budapest, or in Hungary. This popularity among filmmakers may be because of the cheap fees and the fact, that this city has a very mixed landscape and architecture, which makes it suitable to ’play the role’ of almost any other European cities. For example, in the 2005 movie München by Steven Spielberg Budapest was transfigured to Rome, Paris, London, and München, but our capital also portrayed Moscow (Die Hard 5), Baltimore, Belgrade (The Raven), and Berlin (Spy Game, The Debt) in other films, and even Argentina in Evita (1996). Brad Pitt and Robert Redford in Spy Game, with the Synagogue in the background While in Western cities the fees of shooting a movie are rather high, in the East, like in Budapest it is approximately 2000 Ft/squaremeter/day.

5 editor’s secrets to help you write like a pro I do a lot of copyediting, both of books and advertising collateral. I’ll let you in on a secret that still surprises me, although I’ve seen it hundreds of times now. If you looked at the raw work of most professional writers, you’d be pretty underwhelmed. Fifteen Writing Exercises Writing exercises are a great way to increase your writing skills and generate new ideas. They give you perspective and help you break free from old patterns and crutches. To grow as a writer, you need to sometimes write without the expectation of publication or worry about who will read your work. The 100 Most Important Things To Know About Your Character (revised) Quote from original Author(Beth):This list came about when, one day while struggling to develop a character for an upcoming Hunter game, my lovely roommate Nikki looked at me and said something like, "Wouldn't it be cool to have a list of questions you could go through and answer while you were making characters, so you'd make sure to consider all sorts of different elements in their personality?" I agreed, and that very evening we sat down over hot chocolate and ramen noodles to whip up a list of 100 appearance-, history-, and personality-related questions (which seemed like a nice even number) to answer as a relatively easy yet still in-depth character building exercise. Later on, we went through the list again, took out the questions that sucked (because there were a lot of them) and replaced them with better ones.