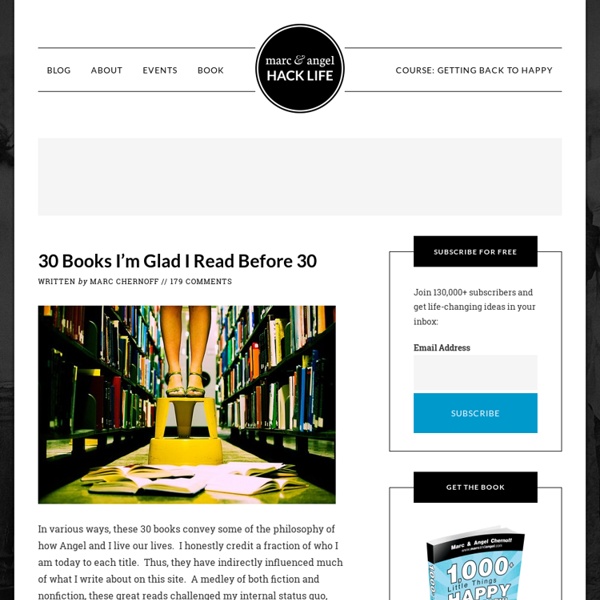 In various ways, these 30 books convey some of the philosophy of how Angel and I live our lives. I honestly credit a fraction of who I am today to each title. Thus, they have indirectly influenced much of what I write about on this site. A medley of both fiction and nonfiction, these great reads challenged my internal status quo, opening my mind to new ideas and opportunities, and together they gave me a basic framework for living, loving, learning and working successfully. If you haven’t read these books yet, I highly recommend doing so. They will enrich your library and your life. Stumbling on Happiness by Daniel Gilbert – Gilbert, a Harvard professor of psychology has studied happiness for decades, and he shares scientific findings that just might change the way you look at the world. What are your favorite books? Photo by: Katie Harris

Related:  Articles That Caught My Eyes

Baby born missing most of his brain celebrates milestones Their son's first birthday was a welcome cause for celebration for the family of a Florida baby born without a large part of his head and skull. Little Jaxon Buell wasn't expected to survive more than a few days after he was born last year. On Facebook, more than 100,000 people now follow the boy's remarkable survival story and the hashtag #JaxonStrong.

25 Great Quotes to Inspire and Brighten Your Day Here’s a collection of great quotes by some of the most inspirational men and women that ever walked this earth. Hopefully you’ll find them inspirational in some way. If you do like them and find them helpful, check out our similar posts by visiting the links listed below. We have created over 20+ of these galleries, so there is lots more to be seen. Also, be sure to inspire your friends, family and coworkers by sharing some great quotes with them. Best 101 Entrepreneurship Quotes Ever · 14 Clicks I’m a big fan of quotes. I could read them all day long. Some quotes can shift your entire mindset on something while others are just nice to bring up in conversations.

Simple animation to explain complex principles - Electronics 1, aircraft radial engine 2, oval Regulation 3, sewing machines 4, Malta Cross movement - second hand movement used to control the clock Fingers on the pulse - give me your "zeitgeistiest" non-fiction picks - books recommendations non-fiction Help me put together a list of the most zeitgeist-y, readable and accomplished "big idea" non-fiction books of recent years. Pretend I just dropped out of the sky and want to catch up on the big global debates, conversations, popular trends of intellectual thought in the English-speaking world. What's my reading list? Goodbye LEDs, hello plastic bulbs? Just when LED light bulbs seemed to be gaining traction, along comes a technology that researchers insinuate could trump them: Plastic. Meet the Fipel - the field-induced polymer electroluminescent light source. According to physicists at Wake Forest University in North Carolina and Trinity College, Dublin, a Fipel requires less energy than a fluorescent bulb does, the BBC reports. Thus, a Fipel would also be more energy efficient than an LED bulb, since LEDs and fluorescents require about the same amount of electricity. As I wrote last week, LED vendors are struggling in the vast market for commercial office lighting, where buyers are not willing to pay the higher price that manufacturers charge for LEDs, even though LEDs last longer and have other advantages.

Books.Blog – Skip Graduate School, Save $32,000, Do This Instead Three years ago, I invested $32,000 and the better part of two years at the University of Washington for a master's degree in International Studies. The verdict? It wasn't a complete waste of time and money. 5 Ways To Hack Your Brain Into Awesomeness Much of the brain is still mysterious to modern science, possibly because modern science itself is using brains to analyze it. There are probably secrets the brain simply doesn't want us to know. But by no means should that stop us from tinkering around in there, using somewhat questionable and possibly dangerous techniques to make our brains do what we want.

kirjasto.sci.fi/jlborges.htm Argentine poet, essayist, and short-story writer, whose tales of fantasy and dreamworlds are classics of the 20th-century world literature. Borges was profoundly influenced by European culture, English literature, and such thinkers as Berkeley, who argued that there is no material substance; the sensible world consists only of ideas, which exists for so long as they are perceived. Most of Borges's tales embrace universal themes – the often recurring circular labyrinth can be seen as a metaphor of life or a riddle which theme is time.

The true picture of US unemployment The latest batch of closely watched US unemployment data is due out today with the headline jobless rate expected to hold at 9.1%. But what can we really learn about the world's largest economy from the headline rate? Ahead of the latest numbers, M&G Investments is making a plea to markets and economists to look further into the numbers and what its own delving has found makes gloomy reading. The October US non-farm payrolls, due at 12.30pm UK time, are forecast to rise by 95,000, according to a Reuters poll. That's a slight improvement to build on September's rise in employment.

The Top 10 Relationship Words That Aren't Translatable Into English Here are my top ten words, compiled from online collections, to describe love, desire and relationships that have no real English translation, but that capture subtle realities that even we English speakers have felt once or twice. As I came across these words I’d have the occasional epiphany: “Oh yeah! That’s what I was feeling...” Mamihlapinatapei (Yagan, an indigenous language of Tierra del Fuego): The wordless yet meaningful look shared by two people who desire to initiate something, but are both reluctant to start. Oh yes, this is an exquisite word, compressing a thrilling and scary relationship moment.

Neil deGrasse Tyson Lists 8 (Free) Books Every Intelligent Person Should Read A Reddit.com user posed the question to Neil deGrasse Tyson: "Which books should be read by every single intelligent person on the planet?" Below, you will find the book list offered up by the astrophysicist, director of the Hayden Planetarium, and popularizer of science. Where possible, we have included links to free versions of the books, all taken from our Free Audio Books and Free eBooks collections. Or you can always download a professionally-narrated book for free from Audible.com.

10 New Must-Reads for October As we ease our way into the scariest month of the year, it’s time again for us to present our list of the most exciting books due to grace our shelves in the weeks to come. This month, take your pick from October’s virtual smorgasbord of books, and whether your pleasures lie in zombies, genetic anomalies, poetry, God, hell, love triangles or some combination of the above, you’ll find something to like here. Or maybe several somethings — after all, the weather’s getting chilly, and nothing compliments a cup of tea better than a great book. Click through to see our preview of the best bets for great reading this month, and let us know which books you can’t wait to read in the comments. The Cat’s Table, Michael Ondaatje (October 4) In 1954, at the start of the novel, Michael is 11 years old and on board the Oronsay, travelling to London from Ceylon (now Sri Lanka).

Meet The Fuel of the Future Archaean bacterium Credit: Corbis In talking to ARPAe chief Arun Majumdar last week, I asked him about the future of transportation fuels. Even with more hybrids and electric vehicles on the road, the U.S. Energy Information Administration says the American driver will rely on liquid fuels for the next 20 years. Corn-based ethanol needs big subsidies and is of dubious environmental benefit. So to break the stranglehold of foreign oil, scientists and engineers are developing something called electro-fuels.