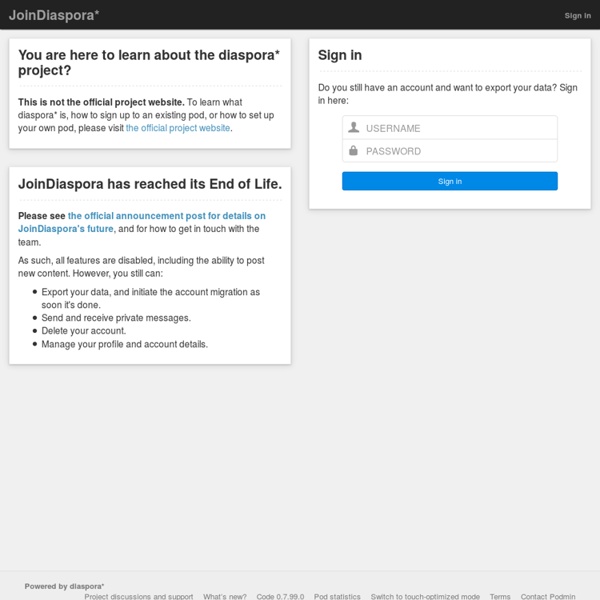 Sotades Sotades (Greek: Σωτάδης; 3rd century BC) was an Ancient Greek poet. Sotades was born in Maroneia, either the one in Thrace, or in Crete. He was the chief representative of the writers of obscene and even pederastic satirical poems, called Kinaidoi, composed in the Ionic dialect and in the "sotadic" metre named after him. The evolution of long-distance relationships in social media [Infographic] 23 September '11, 08:36pm Follow Communication has come quite a long way. From being completely unable to keep in touch while apart, to now being able to live-stream video while chatting via several different mediums, the evolution of peer-to-peer interaction over long distances has reached a number of milestones. In a recent info graphic from Get.Rounds, a social platform revolving around entertainment, the evolution of the long-distance relationship between lovers and couples has been listed.

Bukobot 3D Printer - Affordable 3D with No Compromises! by Diego Porqueras Affordable Desktop 3D Object Printing for EveryoneGreat First Printer..or Second..or Third! Easy to BuildEasy to Expand or UpgradeHigh Quality ComponentsFaster than most printersDual Extruder OptionGreat DocumentationOpen Source Environmentally Friendly Options You can create almost anything you can dream up with a Bukobot 3D printer, right on your desk! The Buko framework is the next generation of Open Source 3D Printers. 3D printers using this new framework are called Bukobots. With many months in development, I have combined the best ideas from the open source community and some new ideas of my own into an extremely flexible open source 3D printer design.

14 Online Presentation Tools There may be times when you need to present ideas to clients or co-workers and could benefit from one of the many resources for creating online presentations. In this post we’ll introduce 14 different presentation tools to get the job done. Some are free to use while others will come with a cost. Online Presentation Tools: 280 Slides 280 Slides is a free tool with a clean user interface. the flowerchild dwelling: do what you can. – Mozilla Firefox I know that there are some of you who feel "behind." Like something hasn't *clicked*, yet. It feels like you're running in place. The Year That Was Tom Scocca, Managing Editor of Deadspin, Slate Columnist, and Author of Beijing Welcomes You In this chain-reaction year—disaster, war, revolution, and death chasing one another around the globe—the pepper-spray assault at Cal-Davis was nowhere near the biggest event. Instead, it was small enough to be intelligible. This was an American college campus where a thug cop, in doomsday black armor, hosed down a row of seated students with a chemical weapon. Unlike the raging NYPD commander who’d lunged to spray helpless protesters, UC Davis police Lt. John Pike was blandly methodical.

Transparency: GOOD's Most Popular Infographics of 2010 - Design In the last year, we've released a nearly 100 original infographics. Here is a look back at the ones that drew the most attention, on topics from happiness to Burning Man (click on the images to launch the infographics). 1: Mean Happiness This piece, which tracks happiness in countries over time, was designed by OPEN.

Decentralize the web with Diaspora by Daniel G. Maxwell S. Raphael S. Ilya Z. We're fully funded! Check out some of the other great projects on Kickstarter Diaspora - the privacy aware, personally controlled, do-it-all distributed open source social network We are four talented young programmers from NYU’s Courant Institute trying to raise money so we can spend the summer building Diaspora; an open source personal web server that will put individuals in control of their data. What is it? Enter your Diaspora “seed,” a personal web server that stores all of your information and shares it with your friends.

Check out my cool home design on Autodesk Homestyler! © 2013 Autodesk, Inc. All rights reserved. Use of the service is subject to the Homestyler Terms of Use. Trademarks Autodesk is a registered trademarks or trademarks of Autodesk, Inc., and/or its subsidiaries and/or affiliates. All other brand names, product names or trademarks belong to their respective holders. English Grammar 101 - Foreword – Mozilla Firefox Welcome to English Grammar 101. The author, Marvin Van Horne, originally created this instructional series from his love of language and the real world needs of his students. Once created, he quickly realized the series could not only benefit his students but anyone interested in improving his or her knowledge of the English language. Over his thirty-six year career, Marvin developed a teaching method that allowed students to learn language concepts and experience the language at the same time. Using this method, students were encouraged to repeat each lesson as many times as necessary until they scored 80% or better. This repetitive technique lead to dramatic improvements in a student's ability to learn and retain the concepts.

Augmented Reality with #Processing - Tutorial by Amnon Owed All of the visuals in the above video were created using NyArtoolkit for Processing. NyARToolkit is an augmented reality toolkit built with 100% pure Java. It is derived from ARToolkit-2.72.1. Like Processing itself it’s open source and free! In this tutorial you will learn how to use it to place computer generated imagery correctly onto real world footage. To do this in real-time NyArtoolkit uses markers – black and white images – to determine the three-dimensional position and orientation in the real world. the evolution of the geek: what stage are you at? on [Technabob] October 21st, 2010 by Range How much do you know about geeks? At what stage of geekiness are you? Amazingly, the work geek comes from ‘gecken’, which referred to circus performers biting heads off chickens.

This site may list the some pods--but not all: And here is a static list of pods: by electronics Oct 23

Diaspora is run by using pods. This pod is a rare example of a pod run Diaspora--the makers of Diaspora. You can run your own pod also--and this is the normal way of using this system. The other usual way of using Diaspora is to join someone else’s pod. Pods produce a degree of privacy as the pod-networks are independent of each other and currently do not necessarily show up on search engine results. Anyone seems to be able to join your pod, but they have to find it first. Diaspora looks like it has also got a invite only system so this would mean that you could create a pod for your family and friends only for example. Diaspora might also be good for running a club--such as a sport, gamer or RPG club for example. With Diaspora, I would have a private pod for the club and a public pod as a marketing tool to promote the club. by electronics Oct 22

Agreed. Really hoping it doesn't fizzle out. Also hoping people don't see it as yet another social site and see it instead as an alternative site to replace FB eventually. But people are lazy and stupid as a general rule :) We'll see... by the_third_man Dec 5

Ya, I'm excited I just don't know many real life people who would switch since all of their freinds are on FB and they think its a hassle to change over. by sinquanon Dec 4

Kick ass beginning to a seriously private social networking site. Read: alternative to facebook. Promises to scrape facebook contacts, which should be cool. Can't wait for beta. by the_third_man Dec 4