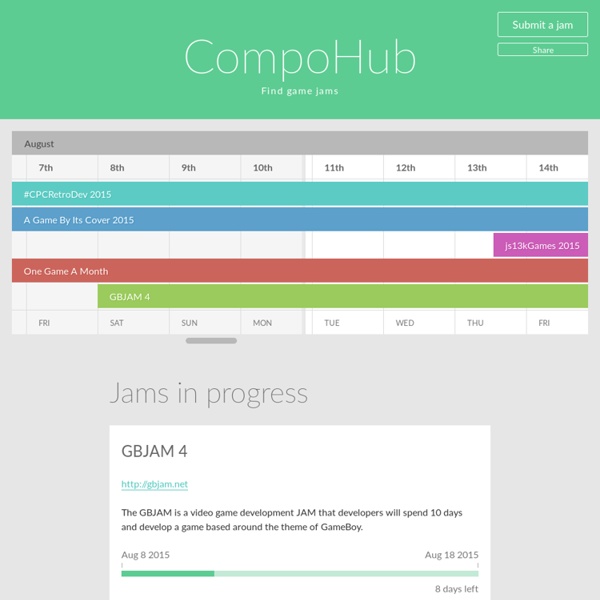 Gameconfs Ludum Dare Ludum Dare 29 Theme Slaughter!! April 10th, 2014 1:16 pm With over 3000 themes suggested by the community, how do we make that more manageable? With this! It’s like hot-or-not for Ludum Dare themes. Next week we kick off Warmup Weekend (April 19th-20th), and begin main Theme Voting. Special thanks again to Sorceress for preparing the theme list for me. I’m in! April 14th, 2014 3:44 am Sorry for the choppiness. Anyway, I’m in! I’m in as well April 14th, 2014 12:34 am 2nd time LD for me. Will be using C++ and probably the SFML library. Good luck everyone! My third Ludum Dare! April 13th, 2014 9:11 pm Hello, This will be my third ludum dare and I am exited! This time I am making an accessibility first approach, complete code designed to run in browsers. Language: Javascript/HTML5Editor: Sublime? I have just tried Phaser and it looks really good. Have fun and make great games. LD 29… I am IN! April 13th, 2014 8:53 pm As customary, Tools IDE: Eclipse Image Editor: Gimp 2 Libraries: Personal In! Tools: I’m in!

The Smartest Ways to Network at a Party Some people enter a room of strangers and glide along from one lively conversation to another, uncovering golden new business contacts. How do they do it? These people know how to read a room—a capacity that can be partly inborn, but also learned. That energetic guy with the 1,000-watt smile, booming voice, ready handshake and a fistful of other people’s business cards might seem like fun, for example. “You meet somebody at a business function, and five minutes later they’re slapping you on the back and calling you by a nickname, ‘Yo, Vic!’ The cues to finding allies in a crowded room aren’t obvious. A tight circle of three to five people standing face-to-face in a closed O, maintaining eye contact and talking intently, might look intriguing, but they may be solving a pressing problem, making them too busy to greet someone new. The most promising group may be lined up loosely, with gaps between participants, “just sort of muddling along, trying to have a conversation,” Ms. Ms. Pamela J.

Christophe Heral and Billy Martin Talk Rayman Legends on Top Score March 6, 2014 Copy and paste the HTML below to embed this audio onto your web page. Audio player code: St. It's a winning collaboration, because the music for Rayman Legends is fantastic. Billy lives in LA. Billy sent his scripts overseas for Christophe to supervise the recording of Billy's music. Christophe and Billy each played several instruments as well — Billy recorded all his own guitar, saxophone and flute parts. Christophe plays ukulele, whistles and sings. Christophe references a lot of famous classical melodies throughout the score. If you're in the Boston area, come meet Billy and me at the "Maestros of Video Games" panel at PAX East in the Boston Convention Center on Saturday, April 12th at 12:30 pm ET.

How to Target the Right Gigs for You - Video Game Music Academy In this post, I’ll discuss how any freelancer can define their ideal client/project – and why it’s important. When you’re trying to establish yourself within an industry, it’s very tempting to take any opportunity that comes your way. Gaining experience can be critical to building out your early portfolio, and the bills don’t pay themselves! One of the best ways to do that is by developing a customer persona or avatar to help focus your efforts. A customer persona is a fictional description of your ideal client, which contains details about who that person is, what their concerns and needs are, and where they spend their time. Plenty of folks get by without doing this step, but I can tell you from experience that completing this step leads to a more effective business on all levels. Let’s say, for example, that you’re a new composer fresh out of school and you’re trying to land your first game audio job. What instrument are you most proficient with?

Disaster, please! Game Industry Networking: Part 1 - How to introduce yourself — Akash Thakkar - Composer/Sound Designer This month, we're going to start the first in our game audio networking series with a simple topic: how to introduce yourself at networking events. Let me ask you: the last time you were at an event and someone asked "So, what do you do?" how did you respond? Did your booming voice shake this stranger to their very core, or did you stammer out a response that left your conversation partner looking at her watch? We have introduced ourselves to people thousands of times, but few among us takes the time to get any better at this crucial aspect of meeting people. Most of us never realize that getting good results from our networking efforts is a skill, not some in-born talent. Here's what to do: All I want you to do this month is to write down answers to common questions you'll get at networking events. Whether it's in an Evernote, Google doc, or just on a notepad, I want you to write down as many answers as possible to the following questions: What do you do? Go Beyond "I make music for games."

OverClocked ReMix - Video Game Music Community How Not to Be a Networking Leech: Tips for Seeking Professional Advice Photo Businesspeople generally think of networking as a mutually beneficial meeting for both parties. But that’s not usually what it is. Far more often, it is one person asking the other for a favor. I have been a management consultant, business owner and speaker for more than 12 years. During the course of a year I receive numerous requests from people I do not know, asking me to network. In the course of these meetings, I have come across people who fall under the category of what I call “networking parasites.” I am not alone in this. Surely you do not want to be the kind of person who antagonizes professionals in this way. Make the meeting convenient. Recently, someone asked me to meet him for coffee, and I told him I could make “just about anything work” on a particular Friday. Buy their coffee or meal. Go with a prepared list of questions. Don’t argue about their advice or point out why it wouldn’t work for you. Don’t ask for intellectual property or materials.

TIGSource How To Network If You Suck At- GameCareerGuide.com If you're anything like me, when you hear the word networking, you're already out the door. Yes, it's important and one of the best ways to meet other developers, potential investors and fans, but it's not something that comes naturally to most people. For some, the thought of talking to strangers might be a terrifying thought. For others, it might just seem insincere to network with people only for potential benefits. In the end, many of us end up shrugging our shoulders and say, ‘I just suck at networking' and pretty much avoid it at all costs. However, going down that route can lead to tons of missed opportunities. TALK TO PEOPLE This might sound obvious, but you can't network if you don't talk to people!

Indie Game: The Movie (2012) Ask The Headhunter: Networking for People Afraid of Being Obnoxious | The Business Desk with Paul Solman Photo by Flickr user Samuel Mann. Nick Corcodilos started headhunting in Silicon Valley in 1979, and has answered over 30,000 questions from the Ask The Headhunter community over the past decade. In this special Making Sense edition of Ask The Headhunter, Nick shares insider advice and contrarian methods about winning and keeping the right job, on one condition: that you, dear Making Sense reader, send Nick your questions about your personal challenges with job hunting, interviewing, networking, resumes, job boards, or salary negotiations. No guarantees — just a promise to do his best to offer useful advice. Question: What’s your opinion on networking the way most people seem to practice it? They ask you if you know about any jobs or if you can introduce them to somebody at Company XYZ. Nick Corcodilos: Sadly, people squander many of the good relationships they already have because they don’t stay in touch. Good networking is not about going to meetings, being on lists, and being seen.