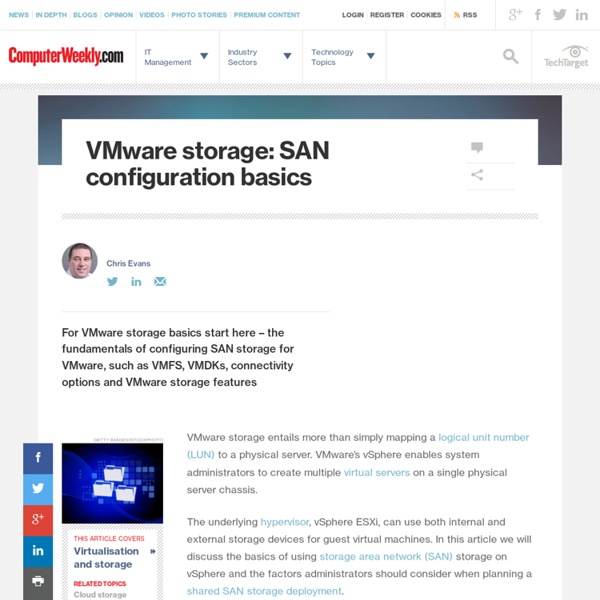 VMware storage entails more than simply mapping a logical unit number (LUN) to a physical server. VMware’s vSphere enables system administrators to create multiple virtual servers on a single physical server chassis. The underlying hypervisor, vSphere ESXi, can use both internal and external storage devices for guest virtual machines. In this article we will discuss the basics of using storage area network (SAN) storage on vSphere and the factors administrators should consider when planning a shared SAN storage deployment. VMware storage: SAN basics vSphere supports internally-connected disks that include JBODs, hardware RAID arrays, solid-state disks and PCIe SSD cards. SAN storage, however, provides a shared, highly available and resilient storage platform that can scale to a multi-server deployment. It is possible to use NAS and SAN-based storage products with vSphere, but in this article we will consider only SAN, or block-based devices. VMware file system and datastores

VMware Storage and Software-defined Storage (SDS) Solutions Blog Posts Oregon State University, a public institution with more than 26,000 students and growing VDI workloads wanted a high performance storage tier for their VDI environment. However, they wanted the solution to be up and running before the school summer session began, along with being easy to operate and scale on an on-going basis, without requiring large upfront investments. Continue reading Review: VMware Virtual SAN turns storage inside-out Convergence of compute and storage is all the rage in the virtualization market these days. You see it in Microsoft's Windows Server 2012 R2 with Hyper-V and Storage Spaces. You see it in third-party platforms such as Nutanix. And you see it in VMware's vSphere flagship with the addition of Virtual SAN, a new capability built into the ESXi hypervisor that turns the direct-attached storage in vSphere cluster nodes into highly available, high-performance shared storage. The goals behind Virtual SAN, or VSAN, are both to lower overall storage costs and to eliminate the I/O latencies associated with networked storage.

VMware vSphere Best Practices - VMwaremine - Mine of knowledge about virtualization VMware tools for nested ESXi If you have nested ESXi running on your homelab environment this is something which you should look at. VMware tools for nested ESXi – very cool flings by VMware labs it does work like on any other guest operating system (Linux, Windows). Virtual Networking 101: Understanding VMware Networking May 30, 2012By Petra Jorgenson On a basic, structural level, virtual networks in VMware aren’t that different from physical networks; vSphere is designed to mimic the functions of a physical network, so a lot of the network hardware you’ll find in the real world, you’ll find virtualized in VMware. If you understand how physical networks operate, then understanding virtual networking shouldn’t be too difficult. Before jumping into an explanation of how VMware handles virtual networking, I’ll first provide a quick refresher of the basic equipment that makes up a physical network. If you already have a firm understanding of how networking works, then you can skip the following paragraph. To connect to a network, a computer must be network-capable, meaning that it must have a working network interface controller (NIC), also known as a network card or network adapter, installed.

Using VMware: Understanding the Virtual Switch Introduction In this article we will explore the VMware ‘Virtual Switch’. The Virtual Switch is nothing more than a logical switching fabric built into your VMware infrastructure (ESX) so that you can network your Virtual Machines (VMs) however you need them. In the following sections we will cover the basics of the Virtual Switch, terminology used, its use, configuration and management.

Understanding Networking in VMware Fusion Your VMware Fusion virtual machines talk to your network using a virtual network adapter. Inside your virtual machine, the guest operating system (Windows, Linux, etc.) believes that it is equipped with an ordinary (wired) Ethernet card. But Fusion patches this card to your Mac's regular network connection, regardless of whether it is wireless or wired.

Install vCenter 5.5 in Server 2012 R2 with SQL Server 2012 vCenter server is central place for managing all the vSphere components like ESXi hosts, clusters, virtual machines, virtual machine templates, replication, high availability and so on. With release of vSphere 5.5, VMware has made lot of improvements in vSphere web client. There are two flavors of vCenter server. First – You can install vCenter Server in Windows Operating Systems, Second – vCenter Server Appliance (VCSA) which is based on SUSE Linux platform. There are different pieces of vCenter server that works together. The components are: Single Sign-On, vSphere Web Client, vCenter Inventory Service and vCenter Server.