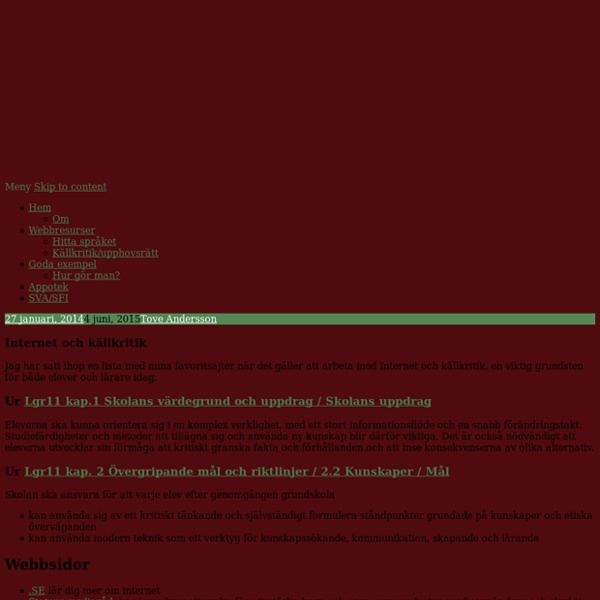 A Starting Point for Ensuring Student Online Privacy Our society is struggling with issues regarding individual privacy. Heated debates are occurring on topics that range from whether the government should be allowed to conduct mass surveillance of citizens to the information that companies should be allowed to collect based on one's computer activity -- and what they should be allowed to do with it. There are also concerns about the security of personal data in general -- consider the data breach at Target last year. A Complicated Issue A January 2014 survey of registered voters released by CommonSense Media found that 90 percent of respondents are either very or somewhat concerned with how private companies with non-educational interests are able to access and use students' personal information. So how should educators address the public's concerns?

Olaus Magnus’ Carta Marina: Sea monsters on a gorgeous Renaissance map The first time one looks at a color print of Olaus Magnus’ 1539 Carta Marina, the eyes scan the crowded landmass and fix on the creatures in the western part of the map. Larger than the other images and framed by open space, they dominate the chart visually and stir the imagination. To us, the quaint figures rising in the northern waters of Olaus’ map of Scandinavia could be illustrations in a children’s book. Frequently Overlooked Google Search Tools and Strategies This morning I spent some time reading the first part of the solution to Dr. Daniel Russell's most recent search challenge on Search ReSearch. Dr. Russell is a search anthropologist working at Google.

Cyberbullying - let's fight it together The music throughout the film is a song by Ben Folds called Still Fighting It. You can listen to it here: JOE: Um … Hi. 40 Maps That Will Help You Make Sense of the World If you’re a visual learner like myself, then you know maps, charts and infographics can really help bring data and information to life. Maps can make a point resonate with readers and this collection aims to do just that. Hopefully some of these maps will surprise you and you’ll learn something new.

edutopia Is Social Media Relevant? Take the Quiz Before we talk social media, let's talk about the relevance of social media by taking a quiz. 40 Must-See Photos From The Past. #5 Is Insane. We came across this selection of astonishing photos from the past, thanks to Reddit user epicnesshunter. Some of these are absolutely mind-boggling, but what makes most of them so powerful is that they were taken in the past century, just one or two generations away from us. #1. Woman With A Gas-Resistant Pram, England, 1938 Om licenserna Our public copyright licenses incorporate a unique and innovative “three-layer” design. Each license begins as a traditional legal tool, in the kind of language and text formats that most lawyers know and love. We call this the Legal Code layer of each license.