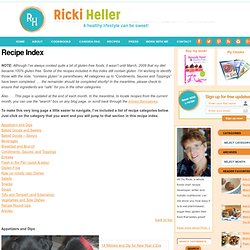 Some of the recipes included in this index still contain gluten. I’m working to identify those with the note, “contains gluten” in parentheses. All categories up to “Condiments, Sauces and Toppings” have been completed. .. . the remainder should be completed shortly! In the meantime, please check to ensure that ingredients are “safe” for you in the other categories. Gluten-Free Vegan Recipes by Allyson Kramer. Choosing Raw – vegan and raw recipes — A Celebration of Vegan and Raw Food. Recipe Index. Food Policy Action - foodpolicyaction.org. Resetting the Table: A People's Food Policy for Canada.

Permies: a big crowd of permaculture goofballs. Www.nfuontario.ca/upload/files/userfiles/Farms, Farmers and Ag in Ontario 2011(2).pdf. Tario Farm Data, Census of Agriculture, 1996, 2001, 2006 and 2011. Nut Tree Agroforestry. Where you find the money To make money off a nut plantation, you need to do three things: make money off the land that isn't being used by the trees when they are young, make money off the nuts, then pocket a bit at the end when the timber harvest is done. A 'bit at the end'? Well, yes. If a seedling costs you $2 to plant, 10¢ a year to weed, prune, protect against voles, etc., optimum harvest value is at 70 years, and commercial interest rate is 9%, then you need to get $1300 stumpage per tree just to break even. And, that $1300 leaves no allowance for risk of loss by ice storms or disease, for the risk that land values will increase by less than 9% per year, for taxes of any kind ...

It's the time between investment and return that is the killer with timber. Ontario farm tax rate There is another reason to want to ensure an early cash crop from your walnut plantation: municipal taxes. Black Walnuts Beef with walnuts Soy with walnuts What is the best intercrop? Selling walnuts. Vegan.pdf. Www.vitalita.com/docs/ATasteOfVitality.pdf. Www.radha.name/sites/default/files/South of the Border - Vegan Recipes .pdf. Gojee - Welcome. Punchfork — The best new recipes from top food sites. Farmers Forum. National Farmers Union. Ontario Farmer. Global biofuel production fell in 2012 April 17, 2014 - In 2012, the combined global production of ethanol and biodiesel fell for the first time since 2000, down 0.4 per cent from the figure in 2011, according to a new document from the Worldwatch Institute.Global ethanol production declined slightly to 83.1 billion liters, while biodiesel output rose fractionally, from 22.4 billion liters in 2011 to 22.5 billion liters in 2012. 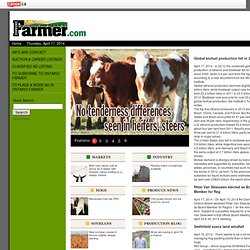 Biodiesel now accounts for over 20 percent of global biofuel production, the institute’s Tom Prugh writes.The top five ethanol producers in 2012 were the U.S., Brazil, China, Canada, and France. But the United States and Brazil accounted for 87 per cent (61 per cent and 26 per cent, respectively) of the global total. U.S. ethanol production totaled 50.4 billion liters, down about four per cent from 2011. Showcasing the Mediterranean Diet and Asian Diet. Spicy Thai Coconut Quinoa Recipe. Difficulty:Easy | Total Time: | Makes:4 to 6 servings There are a few components and a bunch of ingredients in this dish, but don’t let that fool you—it’s still simple enough for a weeknight dinner and you won’t use every pot and pan in the house. 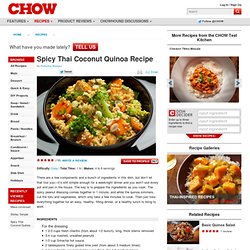 The key is to prepare the ingredients as you cook: The spicy peanut dressing comes together in 1 minute, and while the quinoa simmers, cut the tofu and vegetables, which only take a few minutes to cook. Then just toss everything together for an easy, healthy, filling dinner, or a healthy lunch to bring to work. For the dressing: 1 2/3 cups fresh cilantro (from about 1/2 bunch), long, thick stems removed3/4 cup roasted, unsalted peanuts1/3 cup Sriracha hot sauce2 tablespoons finely grated lime zest (from about 3 medium limes)1/4 cup freshly squeezed lime juice (from about 3 medium limes)1/4 cup toasted sesame oil1 tablespoon packed dark brown sugar2 medium garlic cloves1 1/2 teaspoons kosher salt For the quinoa: To garnish: For the quinoa: 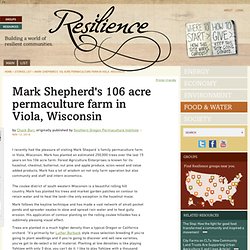 Mark has planted an estimated 250,000 trees over the last 15 years on his 106 acre farm. Forest Agriculture Enterprises is known for its hazelnut, chestnut, butternut, nut pine and apple produce, scion-wood and value added products. Mark has a lot of wisdom on not only farm operation but also community and staff and intern economics. The coulee district of south western Wisconsin is a beautiful rolling hill country. Mark has planted his trees and market garden patches on contour to retain water and to heal the land—the only exception is the hazelnut maze. Mark follows the keyline technique and has made a vast network of small pocket ponds and spreader swales to slow and spread rain water and to heal gully erosion.