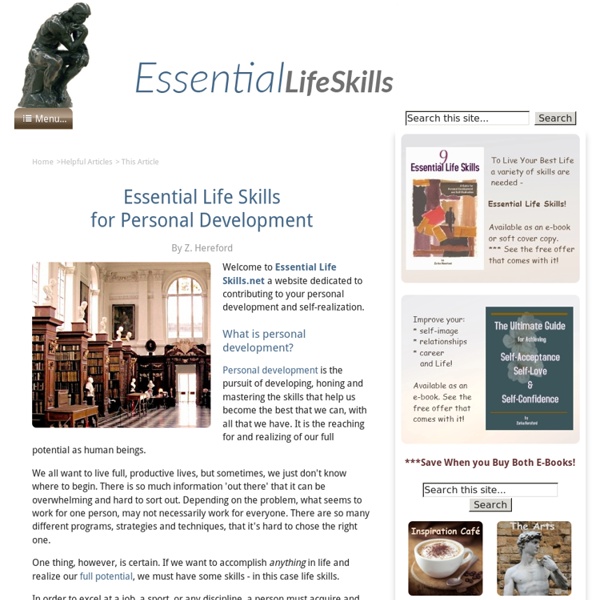 17 creative websites to bookmark (unless you are dumb)! At the risk of having you never come back to this site, I have compiled a list of 17 other sites to feed your creative appetite. Dozens more could have been added to this list (perhaps there will be a sequel to it). Most of the sites included here do not get the credit they deserve, and even the popular ones deserve even more attention. 1. 2. 3. 4. 5. 6. 7. 8. 9. 20 x 200 – When 20×200 first started prints were available in runs of 200 for the bargain basement price of $20. 10. 11. 12. 13. 14. 15. 16. 17. So there’s the list! 16 Audio Books That Will Improve The Way You Live, Work And Love If there's an area in your life that could do with some improvement, a good audio book might be able to steer you in the right direction. Best of all, they can be readily absorbed while driving or multitasking, which makes them perfect for people with busy schedules (i.e. - nearly all of us.) We asked Amazon's digital audiobook arm Audible to share some of its best-selling self-improvement titles. Here are their picks. Audio book picture from Shutterstock The following audio books cover a wide gamut of topics, from mastering creative thinking to maneuvering the corporate ladder as a woman. Blink by Malcolm Gladwell "Intuition is not some magical property that arises unbidden from the depths of our mind. Mastery by Robert Greene "What did Charles Darwin, middling schoolboy and underachieving second son, do to become one of the earliest and greatest naturalists the world has known? The Art of Creative Thinking by Rod Judkins How to Win Friends and Influence People by Dale Carnegie

creativelinks Leslie Owen Wilson 1997, 2005, restrictions on usage See companion course WebPages Creative Thinking and Living "Niente Senza Gioia" (nothing without joy) Of all my pages and parts of this website, the biggest surprise was the traffic I have received in the creativity section. Everyone has a story, a question, a comment, and yet this is a sorely neglected area in schools, in our children's training and education. I already know, so I will let you ask yourselves the same question, and then ask teachers, school administrators, and politicians. If you try to reach a site that has been hyperlinked and get an error message or a "page not found message," try again later. Have fun browsing and many blessings! Other sites on creativity BellaOnline - The voice of women - This site is quiet comprehensive and has a internal sections, each with an array of topics within a heading. Born to Explore - about the relationship between ADD, ADHD, creativity and personality type. Women and Creativity

Four Simple Positive Psychology Interventions That Could Change Your Life | The Huffington Post Positive Psychology (PP) is generally considered to be a subfield of psychology. Refreshingly, PP focuses on what is positive about human beings, instead of what our deficits are. The PP movement is global and at the moment flourishing, with an abundance of newly researched positive psychology interventions (PPIs) and master degree courses popping up across the globe (the last count being 12 different programs). Every year I delight to watch PP’s continued growth. We can see how its theories, research and practices are filtering into all areas of our society, policy and culture. From the way we think about eduction to what we value as a community, PP is everywhere! I am reminded of the recent statement by the progressive officials from South Australia (SA) who declared their region, a ‘state of wellbeing’ for its millions of citizens. This can be achieved through the practice of one or many PPIs. 1) Best possible self - We often are are too busy to really stop and focus on what we want.

How to Exercise an Open Mind Edit Article Edited by Sam Rawlins, Krystle C., Richd, Erika Altek and 105 others One hour of increased brain activity via innovative thinking or experiencing new stimuli can make you smarter, more energetic, more creative, more sociable, and more open to new experiences and ways of thinking. The key ingredients are to be open to new experiences and to make changes in previous ways of thinking about these experiences. Ad Steps 1Don’t allow yourself any dead time. 20Browse something that you are not familiar with the internet. Tips Become more like an inquisitive child. Warnings Exercising an "open" mind and "stimulating" your mind are different.

THE RATIONALIST ASSOCIATION OF NSW INC. Creativity Challenges - Table of Contents Understanding (and Refuting) the Arguments for God Michael Shermer has made a career of skepticism — he is the founder of Skeptic, for one — but in his 2000 book, How We Believe: The Search for God in an Age of Science, he does not come across as the hardcore atheist you might expect. (He prefers "nontheist.") One can appreciate his honesty and integrity. In a media that both champions and lambasts the so-called "New Atheist" movement, Shermer says one thing: Show me the evidence. Certain fundamentalists and atheists alike see the question of God as an either-or proposal, not content on the murky speculations presented by the other "side." As Shermer points out, what we consider "miraculous" simply means what we do not currently understand. 1. / 2. This argument results in an infinite regress. 3. Shermer borrows from Martin Gardner by stating that this is a "mysterian mystery" — the idea that nothing is unknowable is due to our minds being unable to process the thought of it. 4. 5. 6. 7. Obviously there is no proof in this argument. 8.

How And Why To Keep A “Commonplace Book” The other day I was reading a book and I came across a little anecdote. It was about the great Athenian general Themistocles. Before the battle of Salamis, he was locked in a vigorous debate with a Spartan general about potential strategies for defeating the Persians. When I read this, I immediately began a ritual that I have practiced for many years–and that others have done for centuries before me–I marked down the passage and later transferred it to my “commonplace book.” In other posts, we’ve talked about how to read more, which books to read, how to read books above your level and how to write. What is a Commonplace book? A commonplace book is a central resource or depository for ideas, quotes, anecdotes, observations and information you come across during your life and didactic pursuits. Some of the greatest men and women in history have kept these books. Not only did all these famous and great individuals do it. How to Do It (Right) –Read widely. -Wisdom, not facts. -Use them!

Why We Procrastinate :: Health :: Lists :: Procrastination :: Paste This article is not meant to diagnose or provide medical advice—that responsibility lies with physicians. Last minute taskers rejoice: psychological research proves that procrastinators are not necessarily lazy. Often, they are people who fear failure and rejection but don’t know the right strategies to reveal and conquer that fear. Oh. Well that’s not much better than “lazy,” but at least we have a legitimate excuse. One of the more obvious reasons why people procrastinate is to avoid doing something unpleasant. According to one of the most popular therapeutic approaches, called cognitive-behavioral therapy (CBT), we all have certain basic assumptions about ourselves, either positive or negative, known as core beliefs. Even when we know that fear of failure causes procrastination, that’s too broad of a concept. We Seek What We Believe According to self-verification theory we behave in a way and connect to people who verify our own beliefs about ourselves. Are You Good Enough?

amazon Why Wait? The Science Behind Procrastination – Association for Psychological Science Believe it or not, the Internet did not give rise to procrastination. People have struggled with habitual hesitation going back to ancient civilizations. The Greek poet Hesiod, writing around 800 B.C., cautioned not to “put your work off till tomorrow and the day after.” The Roman consul Cicero called procrastination “hateful” in the conduct of affairs. (He was looking at you, Marcus Antonius.) What’s become quite clear since the days of Cicero is that procrastination isn’t just hateful, it’s downright harmful. In the past 20 years, the peculiar behavior of procrastination has received a burst of empirical interest. “What I’ve found is that while everybody may procrastinate, not everyone is a procrastinator,” says APS Fellow Joseph Ferrari, a professor of psychology at DePaul University. “It really has nothing to do with time-management,” he says. Suffering More, Performing Worse “If I have a dozen things to do, obviously #10, #11, and #12 have to wait,” says Ferrari.

A Complete Guide To The Science Of Self-Talk – Better Humans I was instantly taken by the science of self-talk and emotion, but one instance in particular blew me away. During my first year at college, Yvonne was head of the Psychology Department, but she soon moved to Ghent University, and we lost contact for several months. When I eventually emailed her, she asked me if I wanted to chat via Skype. As much as I wanted to, I was terrified of Skype and declined. I had never done a video call before, but there was another reason I was fearful of it, one I was completely unaware of. Before she had gone to Ghent, we had spent many hours in her office talking about language and emotion. The email went something like this: Hi Brian, don’t be worrying about Skype. After reading the email, I thought to myself: “That sounds so simple. As I stood up to put away my laptop, it hit me: “Holy shit! When I sat down to read the email again, I recognized what she had done. My self-talk had shifted, and so had my willingness to act. 1. 2. 3. Here are two examples.