50 Ways to Help the Planet 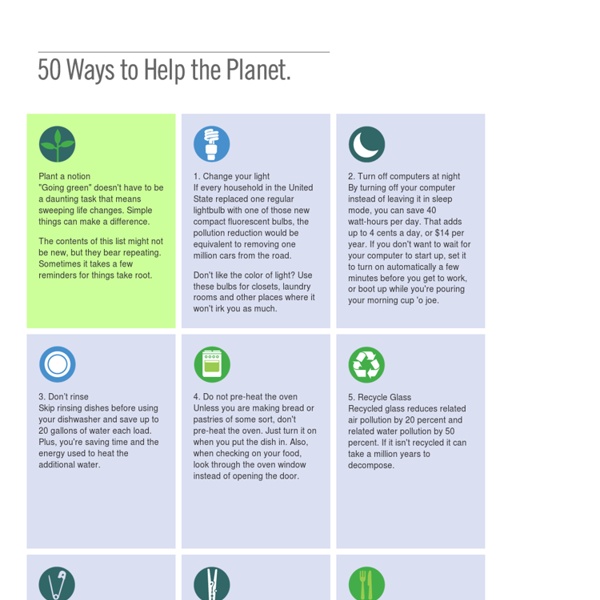 PLANT A NOTION "Going green" doesn't have to be a daunting task that means sweeping life changes. Simple things can make a difference. The contents of this list might not be new, but they bear repeating. Sometimes it takes a few reminders for things take root. 1. CHANGE YOUR LIGHT If every household in the United State replaced one regular lightbulb with one of those new compact fluorescent bulbs, the pollution reduction would be equivalent to removing one million cars from the road.

35 Brilliant Insights From Nassim Taleb - SFGate Steven Perlberg, provided by Published 2:02 am, Tuesday, July 16, 2013 Facebook is the perfect platform for eccentric author Nassim Taleb, whose knack for thinking outside the box and waxing poetic is unparalleled. Here's how the acclaimed author of The Black Swan describes his account: "This is for philosophical discussions. Please, no finance (or similarly depraved topics), and no journalists."

Saving the Environment The pyramid of life is on very shaky ground. Experts say that proper handling of waste materials, such as reusing or disposing of them properly, should constitute an important part of the our efforts to preserve energy and protect the environment. Countries worldwide should use less coal and more reusable power like hydro or solar power. Let us plan our cities according to water available and not avail water for too many homes that have been crammed into development. Saving energy reduces air pollution and greenhouse gases. The less we pollute our environment, the more we prevent global warming. 13 Depressingly Accurate Signs Of The Times The phrase "I remember back in my day ... " isn't just something you hear from grandma. Nope, you probably say and think it more often than you realize, especially when you're talking about the tech you grew up with. For proof that times are a changing, look no further than these signs—both literal and figurative—that'll actually make you want to put your smartphone away once you remember the good ol' days.

Casa Cerrada Reforma 108 / DCPP Arquitectos / México - JovarqJovarq Casa Cerrada Reforma 108 / DCPP Arquitectos / México Un patio de altos muros corre paralelo a esta larga casa negra en la Ciudad de México por DCPP Arquitectos. La trama se divide en dos rectángulos estrechos, con la casa en un lado y el patio en el otro. En el interior del patio se encuentra una pantalla de madera que está en contra de las murallas negras que la rodean. Acristalamiento en el lado del patio de la casa ofrece vistas al espacio al aire libre de la cocina, sala de estar y dormitorio arriba. Escaleras en el otro extremo de la casa conducen a un dormitorio y sala de estar adicional en la planta intermedia. 29 Signs That The Elite Are Transforming Society Into A Total Domination Control Grid The elite want to tightly control almost everything that we do, say and think. When most people think of “tyranny”, they think of thugs with guns and little dictators running around barking orders at everyone. But that is not how the elite are accomplishing their goals these days. They want us to actually believe that we have freedom and that we are choosing our own leaders, but in the background they are exerting “soft power” in a way that is absolutely ruthless. They fund the political campaigns of our politicians, they own nearly all of the large corporations and financial institutions, they exert very tight control over the media and their agenda is being promoted through the education systems of virtually every nation on the planet. What the elite are doing is not illegal.

5 Ways to Help Save the Environment Steps Method 1 of 5: Saving energy 1Switch off anything that uses electricity. If you're not using it, turn it off. This goes for lights, televisions, computers, printers, and so on. 20 Words We Owe to William Shakespeare No high school English curriculum is complete without a mandatory dose of William Shakespeare, and no American teenager makes it to graduation without whining about how boring it is to learn about iambic pentameter. As contemporary speakers of the English language, however, they might be interested to learn how much the Bard of Avon had in common with the generations that popularized the acronyms LOL and OMG and reinvented the 1940s slang term “hipster.” Endlessly imaginative and not overly concerned with grammatical convention, Shakespeare’s scripts contain over 2200 never-before-seen words—a diverse collection of loan-words from foreign languages, compound words from existing English terms, nouns turned into verbs, and creatively applied prefixes—many of which have entered into everyday language. Here are 20 examples of words we can thank Shakespeare for. 1.

philips eco-friendly microbial home nov 02, 2011 philips eco friendly microbial home the ‘microbial home’ concept by philips design the ‘microbial home’ by philips design is a concept home design that adopts a systemic approach to domestic activity, connecting machines into a cyclical system of input and output that minimizes waste. as the designers explain, ‘we view the home as a biological machine to filter, process, and recycle what we conventionally think of as waste.’ from domestic beekeeping (‘urban beehive’) to gardens that decompose plastic waste (the ‘paternoster’), view more information about each of the component prototype devices below.

The Idea of Soul Mates Question: The problem seems to be that when you are in a relationship, in the beginning everything is happening, but when you marry that person it changes. I’ve been in several relationships, major relationships, I’ve been married and divorced twice and I’m searching for something special. Something I’m told is called a “soul mate”. Do you believe in such a relationship or person and what would that mean? How would I know that? Ram Dass: Got it!

Glow in the Dark Tiles Definitely in the running when I build my olympic-sized pool at Chez DudeCraft. via IIHIH Empowering Architecture: architects, buildings, interior design, materials, jobs, competitions, design schools Dining Goes Underground in This Bomb Shelter Turned Bistro During World War I, Ypres, Belgium endured a series of ongoing battles between German and Allied forces, leaving many of the small city's buildings war-torn and destroyed. However, a small underground fortification dating back to the 1600s was left relatively unscathed. Built in 1680 by a mythical French marshal as part of a large fortification project in Ypres, the "Kazematten" is known for their large, barrel vaulted rooms of centuries-old stone and mortar. Following the restoration of Belgium, the fortification complex was mostly demolished to allow the city to expand.