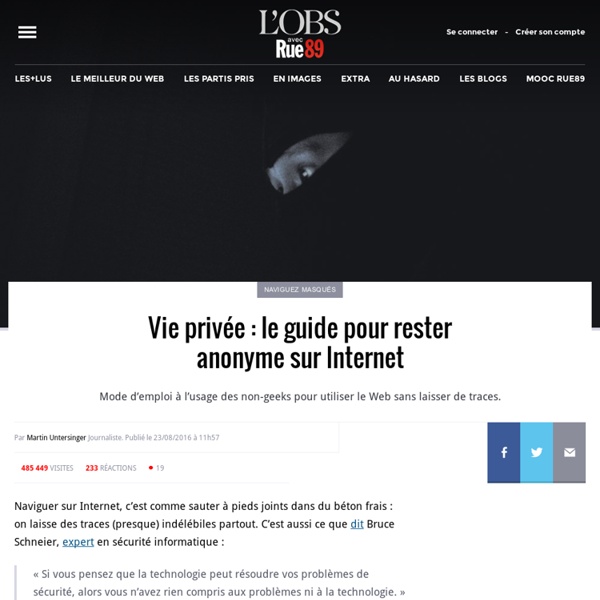 Appeals Court Revives EFF's Challenge to Government's Massive Spying Program San Francisco - The 9th U.S. Circuit Court of Appeals today blocked the government's attempt to bury the Electronic Frontier Foundation's (EFF's) lawsuit against the government's illegal mass surveillance program, returning Jewel v. NSA to the District Court for the next step. Sir Tim Berners-Lee speaks out on data ownership The data we create about ourselves should be owned by each of us, not by the large companies that harvest it, the Tim Berners-Lee, the inventor of the world wide web, said today. Berners-Lee told the IPExpo Europe in London’s Excel Centre that the potential of big data will be wasted as its current owners use it to serve ever more “queasy” targeted advertising. By gaining access to their own data, people could use it with information about themselves from other sources in order to create “rich data” – a far more valuable commodity than mere “big data”, he said. Berners-Lee said that “people only look at one angle” of big data. “When you read big data pieces in a magazine, it’s about how big companies are spying on you. A lot of the marvel of big data is a threat to me.

parasiting the bladerunner wifli In December of 2011 my employer got me a Bladerunner Wifli helicopter for Christmas and I proceeded to investigate the device. Turns out it was running linux 2.6.21 and others had already started on reverse-engineering the packets used to control it . I began to dream about performing a switchroot to a flash drive and being able to record/stream video as I flew it around. *Interactive Toy Concepts is apparently releasing a ‘WiSpy’ version with video streaming in the fall of 2012* Here’s a script I threw together to transfer a file (ie. statically compiled netcat for mips) to the filesystem using telnet, so I could make copies of the mtdblocks, etc: Google’s New Inactive Account Manager Gives You Control Over Your Digital Afterlife What will happen to your Gmail, YouTube, Google Drive and Google+ accounts after you die? That’s probably not something you really want to think about, but as more and more of our data now lives online, that’s sadly a question that comes up with some regularity. Today, Google is launching its Inactive Account Manager on the Google Account settings page, which sets out to set up a system that allows you to tell Google “what you want done with your digital assets when you die or can no longer use your account.” With the Inactive Account Manager, you can set up a very straightforward procedure for what should happen to your data after your account becomes inactive “for any reason.” First, you set up a timeout period (three, six, nine or twelve months of inactivity). After that, you can either have all of your data deleted, or you can select a number of trusted contact who can receive your data from a set of Google services.

U.S. Government Calls to Censor Twitter Threaten Free Speech “[T]he ultimate good desired is better reached by free trade in ideas....That at any rate is the theory of our Constitution.” — Justice Oliver Wendell Holmes, dissent in Abrams v. United States, 1919 EFF has witnessed a growing number of calls in recent weeks for Twitter to ban certain accounts of alleged terrorists. In a December 14th article in the New York Times, anonymous U.S. officials claimed they “may have the legal authority to demand that Twitter close” a Twitter account associated with the militant Somali group Al-Shabaab.

publish0x Recently, I wrote about the Brave team’s report on the data collecting and bidding practises in government-associated websites in the United Kingdom. The conclusions in that report were shocking, as it was found that many of the nation’s council websites had data collected without permission. Almost 7 million accounts were linked to data broker LiveRamp, which until recently was associated with Cambridge Analytica. These include accounts linked to websites related to disability and addiction. Google serves 196 of UK’s council websites and the data made available through the Real-time Bidding (RTB) system includes location, interests and the media that is being consumed. I recommend you read the full report to get a sense of the degree to which our data is being used, and the extent to which the likes of Google and Facebook have a control of the market.

RPi Low-level peripherals Back to the Hub. Hardware & Peripherals: Hardware and Hardware History. Low-level Peripherals and Expansion Boards. Sim card database hack gave US and UK spies access to billions of cellphones American and British spies hacked into the world’s largest sim card manufacturer, stealing encryption keys that potentially gave them access to billions of people’s cellphones around the world, according to documents newly released by NSA whistleblower Edward Snowden. The breach, revealed in documents provided to The Intercept, could have given the NSA and its UK counterpart GCHQ the power to secretly monitor a large portion of the world’s cellular communications, including both voice and data. Gemalto, the company targeted by the spy agencies, produces 2bn sim cards per year for clients including AT&T, Sprint, T-Mobile and Verizon. The Netherlands company operates in 85 countries around the world and provides cards to some 450 wireless network providers globally.

Here's What the Big Tech Companies Know About You With nearly eight billion people on the planet — and more than half of them on internet — verifying who’s who is one of the great technological challenges of our time. To meet this challenge, Biometric security is rising to the occasion, buoyed by technological advancements and user-friendly experiences. Modern biometrics can seem like science fiction, but the concept is far from new. Sir Francis Galton, cousin of the famous Charles Darwin, used an analysis of over 8,000 fingerprint samples to publish what would become the first fingerprint classification system in history.