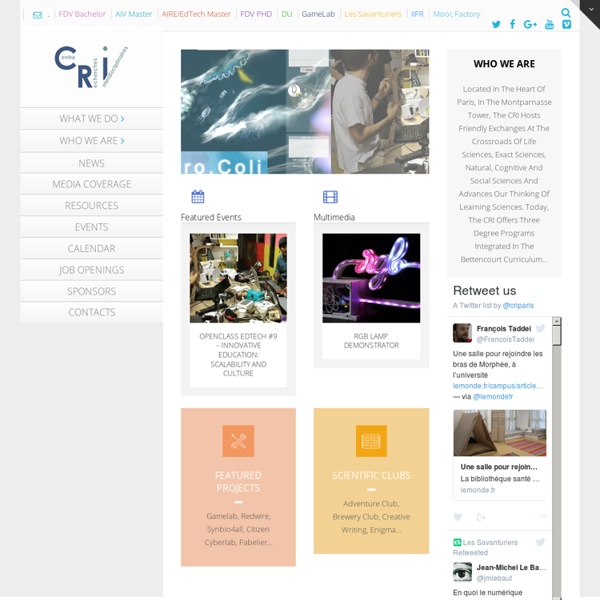 Education Synthetic biology is the design and construction of biological devices and systems for useful purposes.[1] It is an area of biological research and technology that combines biology and engineering, thus often overlapping with bioengineering and biomedical engineering. It encompasses a variety of different approaches, methodologies, and disciplines with a focus on engineering biology and biotechnology.[2] The advance of synthetic biology relies on several key enabling technologies provided at ever increasing speed and lower cost. Consilience (book) Consilience: The Unity of Knowledge is a 1998 book by biologist E. O. Wilson. 16 Transformational Festivals You Need To Experience Many of us attend music festivals for the musical experience. We want to see our favorite DJs, dance to dirty beats, headbang to the bass, and sing out loud to our favorite songs. When Monday morning arrives we often wake up with throbbing heads, aching legs and feet, and sometimes a fuzzy memory. I call that a great weekend, sometimes. However after attending Summer Camp Music Festival in Chillicothe, Il, I discovered I wanted to chase a new reason for attending music festivals.

Confdetail360 This conference will focus on the advancement of synthetic biology, especially its application in the field of antibiotic production in filamentous fungi and actinomycete bacteria, including the implementation and modification of complex biosynthesis pathway modules in existing and new production hosts. Antibiotics production is regulated by complex networks and involves intricate multi-step biosynthetic machineries, as well as major reorganization of primary metabolic fluxes to redirect cellular metabolic resources towards their biosynthesis. The urgent need for new antibiotics caused by the accelerating emergence of multi-drug resistant pathogens worldwide has led to a strong interest in the research community for decidedly novel approaches, collectively referred to as Synthetic Biology. To learn more about the conference, please see the Final Programme(PDF)

Interdisciplinarity Interdisciplinarity involves the combining of two or more academic disciplines into one activity (e.g. a research project). It is about creating something new by crossing boundaries, and thinking across them. It is related to an interdiscipline or an interdisciplinary field, which is an organizational unit that crosses traditional boundaries between academic disciplines or schools of thought, as new needs and professions have emerged. The Top 50 Cities to See in Your Lifetime  Buena Vista Images via Getty Images With our ever-expanding bucket lists, it’s sometimes easy to lose sight of the essentials. Well, we’ve gone to the community of travelers at minube.net with a simple goal: find the greatest destinations on Earth. From the great ancient capitals to the modern cities of Asia, the Americas, and beyond, here are the 50 cities you must see during your lifetime.

Confdetail241 The field of synthetic biology holds a great promise for the design, construction and development of artificial (i.e. man-made) biological (sub)systems, by offering viable new routes to ‘genetically modified’ organisms, smart drugs and hybrid computational-biological devices. The informed manipulation of such biological (sub)systems could have an enormous positive impact on our societies, with its effects being felt across a range of activities such as the provision of healthcare, environmental protection and remediation to the construction of smarter more ubiquitous bio-integrated computing systems, etc. The basic premise of synthetic biology is that methods commonly used to build non-biological systems, such as those employed in the computational sciences and the engineering disciplines that can deal with large and complex systems, could also be use to specify, design, implement, test and deploy novel synthetic biosystems.

The 14 Craziest, Dirtiest, Messiest Festivals In The World 1. Boryeong Mud Festival Get dunked in truckloads of “magic” mud in this wild party in Boryeong, South Korea. For two entire weeks in July every year, the streets are flooded with millions of tourists wrestling, rolling, and swimming in gooey gray clay. Boryeong mud is said to have medicinal qualities that rejuvenates the skin, so don’t hold back if someone splatters you with it on the face. Synthetic biology, ethics and the hacker culture Read Thomas L. Friedman’s “The World is Flat” or Neal Stephenson’s “Cryptonomicon”, and you get a glimpse into how the hacker culture that emerged at the tail end of the twentieth century revolutionized the digital world. Will a confluence of emerging technologies—including information tech, biotech, and nanotech—lead to a similar revolution in the biological world? Behind every computer screen is a complexity of software and hardware that together create a virtual world in which many of us spend more time living out our lives than is probably healthy—whether crunching numbers, playing games or churning out our latest blog. This world is built in part (some would say a large part) on the work of technically savvy individuals—hackers—who have learned the art of manipulating the fundamental building blocks of the digital world.

How to Volunteer Abroad for Free Understandably, the idea of spending thousands of dollars and hard-earned free time to contribute to a good cause does not appeal to many people. However, if you have a specific skillset to contribute, it’s far easier to find a lower-cost or “free” option. Be aware, however, that free projects, because they're usually run by smaller organizations, tend to be less organized. If you’re looking for an experience where you’ll receive training or have daily guidance, then a free volunteering experience is probably not for you. However, if you’re someone who loves the challenge of being thrown in at the deep end, guided by your initiative and ready to take on whatever the experience throws you, then volunteering with an independent or no-fee program is much more up your alley.

DNAWorks at Helix Systems DNAWorks (v3.2.2) The availability of sequences of entire genomes has dramatically increased the number of protein targets, many of which will need to be overexpressed in cells other than the original source of DNA. Gene synthesis often provides a fast and economically efficient approach. The synthetic gene can be optimized for expression and constructed for easy mutational manipulation without regard to the parent genome. CSID - Center for the Study of Interdisciplinarity There are at least two approaches that can be taken to research into the state of interdisciplinarity. From the perspective of the mid- to late 20th century, societal pressures revealed gaps and inadequacies in the disciplinary structure of the academy: connections not being made, and topics not being examined. Interdisciplinary programs were developed in areas such as women's studies, gay studies, and environmental studies to address these needs.

Coliving: A Solution for Lonely Millennials? SYRACUSE—This office looks like a pretty typical co-working space, what with the guy with a ponytail coding in one corner, the pile of bikes clustered in another, and the minimalist desks spread across a light-filled room. Troy Evans opened this space, CoWorks, in a downtown building here in February. Coworking is probably a familiar concept at this point, but Evans wants to take his idea a step further. On Friday, on the top two floors of the building, he’s starting construction on a space he envisions as a dorm for Millennials, though he cringes at the word “dorm.”