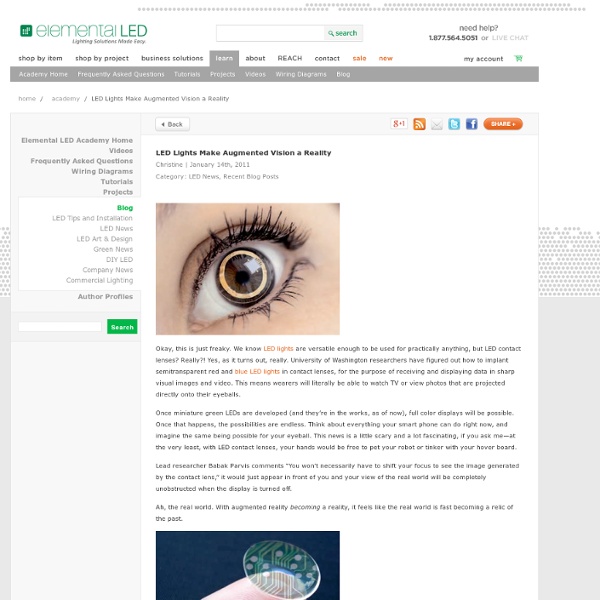 LED Lights Make Augmented Vision a Reality Okay, this is just freaky. We know LED lights are versatile enough to be used for practically anything, but LED contact lenses? Really?! Yes, as it turns out, really. University of Washington researchers have figured out how to implant semitransparent red and blue LED lights in contact lenses, for the purpose of receiving and displaying data in sharp visual images and video. Once miniature green LEDs are developed (and they’re in the works, as of now), full color displays will be possible. Lead researcher Babak Parvis comments “You won’t necessarily have to shift your focus to see the image generated by the contact lens,” it would just appear in front of you and your view of the real world will be completely unobstructed when the display is turned off. Ah, the real world. Thanks to Extreme Tech for the quote and Trendhunter for the images.

Lesson Plan for Making a Speaker Laboratory ©1995 The Regents of the University of California by Regan Lum Introduction: Beyond Design: the Construction and BIM blog By Guest Blogger: Dace A. Campbell, AIA, LEED AP "The price of success is hard work, dedication to the job at hand, and the determination that whether we win or lose, we have applied the best of ourselves to the task at hand." – Vince Lombardi 5 Major Changes Facing the Internet in 2012 Network World - 2012 is poised to go down in Internet history as one of the most significant 12-month periods from both a technical and policy perspective since the late 1990s, when this network-of-networks stopped being a research project and became an engine of economic growth. This year the Internet will face several milestones as it undergoes its biggest-ever technical upgrade, from Internet Protocol version 4 to version 6. In addition, key contracts that the U.S. federal government controls for Internet infrastructure and operations are being re-bid. Taken together, these events could result in monumental changes in both who operates the Internet infrastructure as well as how these operations are handled: 1. The root servers may have a new operator.

Lessons Drawspace Pro Lessons are designed for artists of all levels and educators, and are logically organized into resources and activities. Eventually, all lessons and E-books authored by Brenda Hoddinott will be available here: four to eight brand new lessons and newly-revised older lessons are being added every month! Upgrade Now: Download all 310 lessons and 4 e-books! Invention Awards: A Real-Life Babel Fish For the Speaking Impaired The Audeo captures electronic signals between the brain and vocal cords and synthesizes clear, spoken words By Lisa Katayama Posted 05.20.2009 at 10:53 am Neck Talk Electrodes on the throat pick up electrical signals between the brain and the vocal cords John B. Carnett Today's featured Invention Awards winner is the Audeo, a voice synthesizer that gives back the ability to speak to those with vocal cord or neurological damage.

Aerial Data Visualisation Reveals Life In The United States PBS is exploring the hidden patterns and rhythms that make America work. They are taking this data and visualizing it in a series being called, “America Revealed.” Visualization of internet distribution The pinpointed distribution of the unemployed Domino’s Pizza’s raw ingredients’ delivery routes in the Northeast U.S. electricity network routes Efficient Construction Project Delivery Methods - Sustainability - 3D, 4D, 5D BIM - IPD, JOC, SABER, IDIQ, SATOC, MATOC, MACC, POCA .. ‘Building Information Modelling (BIM) is digital representation of physical and functional characteristics of a facility creating a shared knowledge resource for information about it forming a reliable basis for decisions during its life cycle, from earliest conception to demolition.” “BIM provides a common environment for all information defining a building, facility or asset, together with its common parts and activities.This includes building shape, design and construction time, costs, physical performance, logistics and more. More importantly, the information relates to the intended objects (components) and processes, rather than relating to the appearance and presentation of documents and drawings.More traditional 2D or 3D drawings may well be outputs of BIM, however, instead of generating in the conventional way ie. as individual drawings, could all be produced directly from the model as a “view” of the required information.” – RICS

The Evolution Will Be Socialized From the actions of the Egyptian government to the policies of Facebook, the monopolies of central banks to the corporatization of the Internet, we are witnessing the potential of a peer-to-peer networking become overshadowed by the hierarchies of the status quo. It’s time for us to gather and see what is still possible on the net, and what, if anything, can be built to replace it. I have had a vague misgiving about the direction the net’s been going for, well, maybe 15 years. But until recently, it was more like the feeling when another Starbucks opens on the block, a Wal-Mart moves into town, or a bank forecloses unnecessarily on that cool local bookstore to make room for another bank. Lately, however, what’s wrong with the net has become quite crystalized for me. It started with the corporate-government banishment of Wikileaks last year, and reached a peak with Egypt shutting off its networks to stave off revolution.

Speed Up Your Metabolism - YouBeauty.com - StumbleUpon Not happy with the metabolism you've got? These strategies—for mealtime, gym time, downtime and bedtime—will help you put the pedal to the metal. Pick protein Brain Hacking: Scientists Extract Personal Secrets With Commercial Hardware Chalk this up to super-creepy: scientists have discovered a way to mind-read personal secrets, such as bank PIN numbers and personal associations, using a cheap headset. Utilizing commercial brain-wave reading devices, often used for hands-free gaming, the researchers discovered that they could identify when subjects recognized familiar objects, faces, or locations, which helped them better guess sensitive information. Security interrogators could benefit most immediately from the new brain hacking technique, since it would reveal when suspects are actually familiar with the face of a potential accomplice. As for bank information, scientists could guess the first PIN number only 40% of the time.

How Do You Create A Culture Of Innovation? This is the third part in a series by Scott Anthony, author of The Little Black Book Of Innovation. It sounds so seductive: a “culture of innovation.” The three words immediately conjure up images of innovation savants like 3M, Pixar, Apple, and Google--the sorts of places where innovation isn’t an unnatural act, but part of the very fabric of a company.