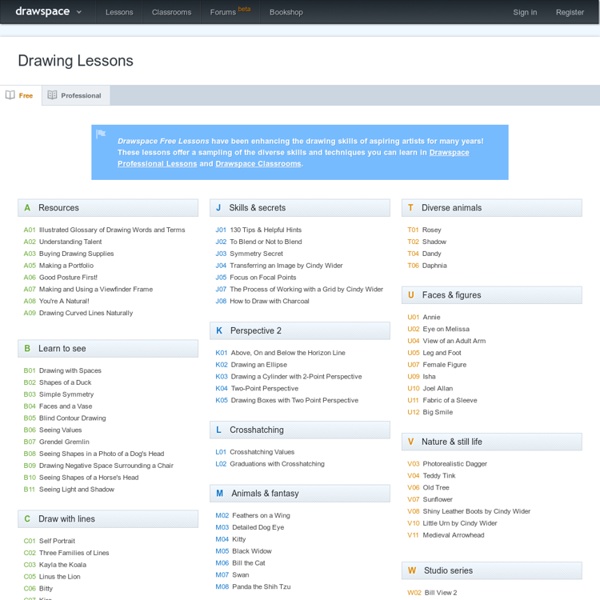 Drawspace Pro Lessons are designed for artists of all levels and educators, and are logically organized into resources and activities. Eventually, all lessons and E-books authored by Brenda Hoddinott will be available here: four to eight brand new lessons and newly-revised older lessons are being added every month! Upgrade Now: Download all 310 lessons and 4 e-books! Try for Free: Download lessons marked as "Free"! 1.1.R1 Glossary Of Art Terms Definitions of art-related terms used in the resources and activities of Drawspace Curriculum (updated February 2013) $3.99or Upgradeto access all files 1.1.R2 Travelling Back in Time with Graphite A few fun tidbits of information about the history of graphite $0.99or Upgradeto access all files 1.1.R3 Examining Graphite and Grades Understanding the differences between H and B grades of graphite $0.99or Upgradeto access all files 1.1.R4 Seeing Grades in Drawings Graphite drawings demonstrate the visual qualities of H and B grades of pencils Download Download

These Photos Are Actually Pencil Perfect Drawings At just 22 years old, Italian artist Diego Fazo has developed the skill to create photo-realistic drawings using a simple charcoal pencil. His latest creation, pictured below, has drawn hundreds of positive comments on his Deviant Art profile. Don’t tell me you can tell the image below is a drawing and not a high-definition photograph, because I don’t buy it. In fact people were so skeptical this incredible piece of art was drawn by hand that young Diego Fazo had to put up some photos of the work in progress just to lay doubts to rest. And looking at his-mind-blowing masterpiece, can you really blame people for questioning it’s hand-drawn? Like other talented artists who started their careers on Deviant Art, Diego is a self-taught pencil master whose technique matured with the passing of the years.

65 Beautiful Fonts You Can Download For Free Freebie 65 Beautiful Fonts You Can Download For Free by Alex on Aug 9, 2012 • 9:43 am 11 Comments There are so many free fonts all around the web these days and sometimes it makes me think is their any really point purchasing fonts. I’ve decide to collect 65 fonts which are suitable for web, print, etc just overall high fonts which can be used in design projects. Celtic Meanings of the Five Fold Symbol Celtic Five Fold Symbol Meaning This page is devoted to the Celtic Meanings within the Five Fold Symbol (symbol shown at top. The center green circle represents the fifth element.) Celtic meanings surrounding the five-fold motif are fascinating and their significance far-reaching. Specifically, I'm completely enchanted by the fifth element, and how it's translated by the ancient Celtic mind. I love the idea of integration in the five-fold symbols.

Proko Full Access to Figure Drawing Videos - miss new tutorials, signup for my mailing list - Let's get into shading a drawing! We'll explore form, planes and light on form. I'll guide you through making an object feeling 3 dimensional by indicating the elements of light on form - highlight, center light, halftones, core shadow, reflected light, cast shadow and occlusion shadow. How the local value of the object effects the tones.

Gorgeous Hand Drawn Illustrations by Si Scott Here you have a series of illustrations called “animals” by Si Scott. Every design is hand drawn perfection! You can tell he has an incredible attention to detail. Enjoy! Create a Trendy Galactic Poster Design in Photoshop This post was originally published in 2009 The tips and techniques explained may be outdated. Galactic space scenes are a popular theme for digital art, they’re packed full of texture and vibrant colour, which are two ingredients of an awesome design! Using Photoshop’s blending modes along with a mix of textures and brushes, let’s get lost in space and create an abstract cosmos poster design.

The Top 10 Relationship Words That Arent Translatable Into English Here are my top ten words, compiled from online collections, to describe love, desire and relationships that have no real English translation, but that capture subtle realities that even we English speakers have felt once or twice. As I came across these words I’d have the occasional epiphany: “Oh yeah! That’s what I was feeling...” Tutorial - Work in Progress Tutorial - Work in Progress May 2002 Hello my millions of fans! (Sid & Doris Bonkers) One of the questions I'm most often asked (not in relation to the Brighton Murders) is how I go about making one of my trademark images. Well the full gory truth is about to be revealed as, for the first time, thanks to the miracle of computer technology, I'm going to take you through a painting from start to finish, by scanning in the painting during it's development, including materials, size, techniques, reference etc.

Pencil drawings by Kate Riley The British artist Kate Riley (Cath Riley) draws only with a pencil. Her ascetic work evaluated Nike, GQ, M & C Saatchi and The New York Times. Many of the works of Kate are in private collections of British, American and Swiss collectors. Ephemeral Portraits Cut from Layers of Wire Mesh by Seung Mo Park Using a process that could be the new definition of meticulous, Korean sculptor Seung Mo Park creates giant ephemeral portraits by cutting layer after layer of wire mesh. Each work begins with a photograph which is superimposed over layers of wire with a projector, then using a subtractive technique Park slowly snips away areas of mesh. Each piece is several inches thick as each plane that forms the final image is spaced a few finger widths apart, giving the portraits a certain depth and dimensionality that’s hard to convey in a photograph, but this video on YouTube shows it pretty well. Park just exhibited this month at Blank Space Gallery in New York as part of his latest series Maya (meaning “illusion” in Sanskrit). You can see much more at West Collects. (art news, west collects, lavinia tribiani)

LED Lights Make Augmented Vision a Reality LED Lights Make Augmented Vision a Reality Okay, this is just freaky. We know LED lights are versatile enough to be used for practically anything, but LED contact lenses? Really?! Yes, as it turns out, really. University of Washington researchers have figured out how to implant semitransparent red and blue LED lights in contact lenses, for the purpose of receiving and displaying data in sharp visual images and video.

The Gustav Klimt Drawings: Inside The Mind Of A Master Draftsman Email I could tell by the look in her eyes that she was up to no good. Her expression, eternal, enticing and vile has, for centuries, lured many men to suffer many, awful consequences. Fortunately, a grumpy docent intervened and saved me from a similar fate.