Autonomous Driving: Steering Concepts for Self-Driving Cars. The Auto industry is in general agreement that autonomous driving is set to become a reality in the near future, but the pathways to such a revolutionary change are less than certain. 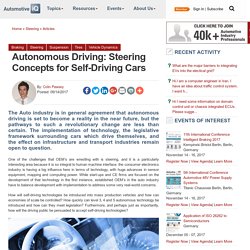 The implementation of technology, the legislative framework surrounding cars which drive themselves, and the effect on infrastructure and transport industries remain open to question. One of the challenges that OEM’s are wrestling with is steering, and it is a particularly interesting area because it is so integral to human machine interface. the consumer electronics industry is having a big influence here in terms of technology, with huge advances in sensor equipment, mapping and computing power. While start-ups and CE firms are focused on the development of that technology in the first instance, established OEM’s in the auto industry have to balance development with implementation to address some very real-world concerns.

Removing the Steering Wheel Future Concepts for Autonomous Cars Mercedes Audi. Robotic Driving Simulator. A very useful tool on the path to robocars would be a high quality computer simulation of the driving environment -- a sort of "Second Life" for robots. 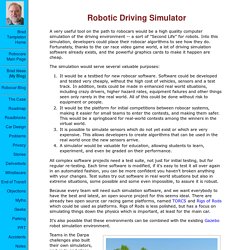 Into this simulation, developers could place their robocar algorithms to see how they do. Fortunately, thanks to the car race video game world, a lot of driving simulation software already exists, and the powerful graphics cards to make it happen are cheap. The simulation would serve several valuable purposes: It would be a testbed for new robocar software. Software could be developed and tested very cheaply, without the high cost of vehicles, sensors and a test track. Earpa note on automated driving. Download Deliverables - AdaptIVe Automated Driving - AdaptIVe FP7 project- Automated Driving Applications and Technologies for Intelligent Vehicles. HAVE IT Website. Navigating City Streets. Navigating City Streets. 6 Questions States Need to Ask About Self-Driving Cars. A growing number of states are taking up legislation that addresses self-driving vehicles in an effort to make it easier for researchers to explore the technology. 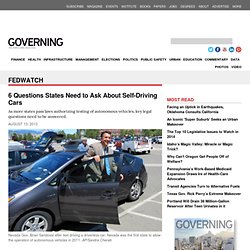 But most of the legislation deals with how states can facilitate testing -- as opposed to consumer use of the vehicles -- largely because truly automated vehicles aren't yet available on the market. When that day comes, states will face a host of thorny questions. Historically, states have regulated drivers, and the feds have regulated vehicles. But what happens when the vehicle is the driver? The National Highway Traffic Safety Administration has said issues such as licensing, driver training, and how the vehicles will be operated are best handled by the states. Nevada became the first state to authorize the operation of autonomous vehicles on its roadways in 2011; since then California, Florida and the District of Columbia have all passed laws that open the door for self-driving vehicle testing on public roads as well. Stereo Cameras Spot Pedestrians, Stop Your Car. Stereoscopic vision helps humans and other highly evolved species spot prey and predators. 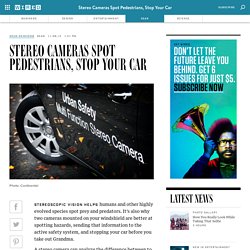 It’s also why two cameras mounted on your windshield are better at spotting hazards, sending that information to the active safety system, and stopping your car before you take out Grandma. A stereo camera can analyze the difference between to images, more accurately detect objects ahead and determine their size and distance. “This cannot be done sufficiently reliably with mono cameras, which only estimates distances and … only able to identify objects that they have learned,” Friedrich Angerbauer, head of Continental’s Advanced Driver Assistance Systems (ADAS) business unit, told Wired.

Stereo cameras are also more expensive, which explains why the technology will first appear on the next generation Mercedes-Benz S-Class due out next year, according to Automotive News. The stereo camera will be paired with a radar sensor that detects objects over 200 yards ahead. EPoSS%20Roadmap_Smart%20Systems%20for%20Automated%20Driving_2015_V2.pdf. Autonomous car. An autonomous car,[1] also known as a driverless car,[2] self-driving car[3] or robot car,[4] is an autonomous vehicle capable of fulfilling the human transportation capabilities of a traditional car. 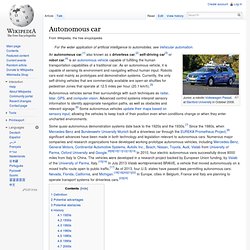 As an autonomous vehicle, it is capable of sensing its environment and navigating without human input. Robotic cars exist mainly as prototypes and demonstration systems. How Google's Self-Driving Car Works. Once a secret project, Google's autonomous vehicles are now out in the open, quite literally, with the company test-driving them on public roads and, on one occasion, even inviting people to ride inside one of the robot cars as it raced around a closed course. 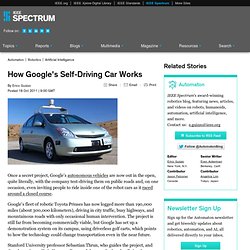 Google's fleet of robotic Toyota Priuses has now logged more than 190,000 miles (about 300,000 kilometers), driving in city traffic, busy highways, and mountainous roads with only occasional human intervention. The project is still far from becoming commercially viable, but Google has set up a demonstration system on its campus, using driverless golf carts, which points to how the technology could change transportation even in the near future.

Stanford University professor Sebastian Thrun, who guides the project, and Google engineer Chris Urmson discussed these and other details in a keynote speech at the IEEE International Conference on Intelligent Robots and Systems in San Francisco last month. Watch: Countdown to Mainstreaming of Self-Driving VehiclesThe Eno Center for Transportation. BY EVA LERNER-LAMPresidentPalisades Consulting Group, Inc. 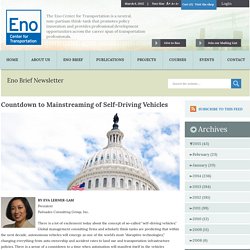 There is a lot of excitement today about the concept of so-called “self-driving vehicles.” Global management consulting firms and scholarly think tanks are predicting that within the next decade, autonomous vehicles will emerge as one of the world’s most “disruptive technologies,” changing everything from auto ownership and accident rates to land use and transportation infrastructure policies. DC Council. SB313. Automated Driving: Legislative and Regulatory Action - CyberWiki. 03-Urmson - aimag2009_urmson.pdf.