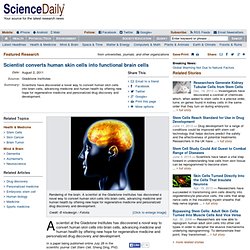 In a paper being published online July 28 in the scientific journal Cell Stem Cell, Sheng Ding, PhD, reveals efficient and robust methods for transforming adult skin cells into neurons that are capable of transmitting brain signals, marking one of the first documented experiments for transforming an adult human's skin cells into functioning brain cells. "This work could have important ramifications for patients and families who suffer at the hands of neurodegenerative diseases such Alzheimer's, Parkinson's and Huntington's disease," said Lennart Mucke, MD, who directs neurological research at Gladstone. 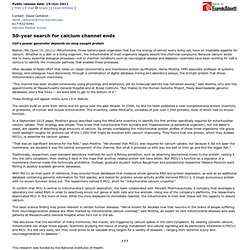 Whether in a dish or a living organism, the mitochondria of most organisms eagerly absorb this chemical compound. Because calcium levels link to many essential biological processes—not to mention conditions such as neurological disease and diabetes—scientists have been working for half a century to identify the molecular pathway that enables these processes. Scientists develop a fatty 'kryptonite' to defeat multidrug-resistant 'Super bugs' Pulseless Artificial Heart Never Misses a Beat. This artificial heart pumps blood continuously using propeller screws. 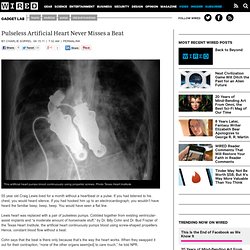 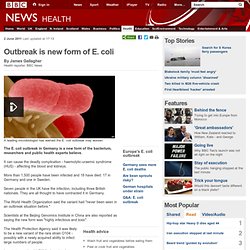 It can cause the deadly complication - haemolytic-uraemic syndrome (HUS) - affecting the blood and kidneys. Super-sticky 'ultra-bad' cholesterol revealed in people at high risk of heart disease. Public release date: 27-May-2011 [ Print | E-mail Share ] [ Close Window ] Contact: Kate Coxkate.cox@warwick.ac.uk 44-024-765-74255University of Warwick Scientists from the University of Warwick have discovered why a newly found form of cholesterol seems to be 'ultra-bad', leading to increased risk of heart disease. 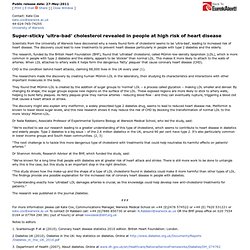 The discovery could lead to new treatments to prevent heart disease particularly in people with type 2 diabetes and the elderly. The research, funded by the British Heart Foundation (BHF), found that 'ultrabad' cholesterol, called MGmin-low-density lipoprotein (LDL), which is more common in people with type 2 diabetes and the elderly, appears to be 'stickier' than normal LDL. CHD is the condition behind heart attacks, claiming 88,000 lives in the UK every year (1). The researchers made the discovery by creating human MGmin-LDL in the laboratory, then studying its characteristics and interactions with other important molecules in the body. Notes to editors 1. Bacteria 'linked' to Parkinson's disease. 23 May 2011Last updated at 00:03 Could this bacterium cause Parkinson's disease? 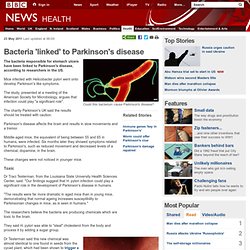 The bacteria responsible for stomach ulcers have been linked to Parkinson's disease, according to researchers in the US. Mice infected with Helicobacter pylori went onto develop Parkinson's like symptoms. The study, presented at a meeting of the American Society for Microbiology, argues that infection could play "a significant role". The charity Parkinson's UK said the results should be treated with caution. Malaria blocks 'super-infection' 15 May 2011Last updated at 18:04 People can be bitten by 700 malaria-infected mosquitoes a year in some countries The malaria parasite can ensure it keeps a host body all to itself by preventing further malarial infections, according to international researchers. 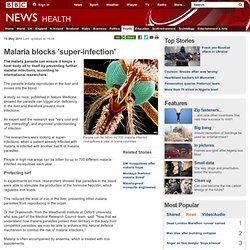 The parasite initially reproduces in the liver and moves into the blood. A study on mice, published in Nature Medicine, showed the parasite can trigger iron deficiency in the liver and therefore prevent more infections. An expert said the research was "very cool and very interesting", and improved understanding of infection. The researchers were looking at super-infections, when a patient already infected with malaria is infected with another batch of malaria parasites. Paralysed man can stand and move his legs again. 20 May 2011Last updated at 00:42 By James Gallagher Health reporter, BBC News Mr Summers: ''The moment I stood up, I was in disbelief'' A US man who was paralysed from the chest down after being hit by a car is now able to stand with electrical stimulation of his spinal cord. 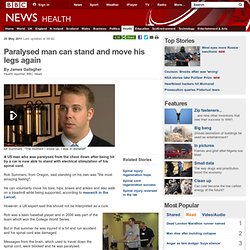 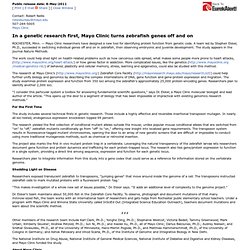 A team led by Stephen Ekker, Ph.D., succeeded in switching individual genes off and on in zebrafish, then observing embryonic and juvenile development. The study appears in the journal Nature Methods. The work could help shed light on health-related problems such as how cancerous cells spread, what makes some people more prone to heart attacks, ( or how genes factor in addiction. The research at Mayo Clinic's ( Zebrafish Core Facility ( could help further unify biology and genomics by describing the complex interrelations of DNA, gene function and gene-protein expression and migration.

"I consider this particular system a toolbox for answering fundamental scientific questions," says Dr. For the First Time Shedding Light on Disease Dr. Women Can Sniff Out Men Without Knowing—And Vice Versa. The discovery adds another piece to the growing body of evidence that humans, much like the rest of the animal kingdom, know more from their noses than previously thought. "We know that for animals, chemosignals are actually the most used signals to communicate, whereas with humans, we think chemosensation is not really used," said study leader Wen Zhou, a psychologist at the Chinese Academy of Sciences in Beijing.

"But based on our experiences, they are still influenced by these cues, even if they don't explicitly know it. " In a recent experiment, subjects who smelled possible pheromones from the opposite sex were more likely to interpret ambiguous human figures as that sex—even when the participants didn't know they were smelling anything. Pheromones—chemicals that can communicate sexual information—are widespread in the animal world, and some research suggests humans use them unconsciously as well. (See "Lesbians Respond Differently to 'Human Pheromones,' Study Says. " ) Columbia engineers patch a heart. Public release date: 6-May-2011 [ Print | E-mail Share ] [ Close Window ] Contact: Holly Evartsholly@engineering.columbia.edu 212-854-3206Columbia University Researchers at Columbia Engineering have established a new method to patch a damaged heart using a tissue-engineering platform that enables heart tissue to repair itself. 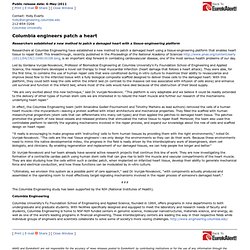 This breakthrough, recently published in the Proceedings of the National Academy of Sciences is an important step forward in combating cardiovascular disease, one of the most serious health problems of our day. Led by Gordana Vunjak-Novakovic, Professor of Biomedical Engineering at Columbia University's Fu Foundation School of Engineering and Applied Science, the researchers developed a novel cell therapy to treat myocardial infarction (heart damage that follows a heart attack). Factory Uses Robots To Grow Human Skin. Scientists at the Fraunhofer Institute for Interfacial Engineering and Biotechnology in Germany oversee a skin-making process controlled by robots. They currently produce 5,000 penny-sized disks of tissue every month, at around $72 per unit. It is hoped that in the future there will be many similar factories, mass-producing skin at a low cost for use in clinical testing and transplants in humans. With robots and computers controlling the process, this maintains a sterile and climate-controlled environment for the skin to be developed, reducing the risk of contamination.

'Immortal' Animals Reveal Anti-Aging Secrets. (Hydra species; Credit: Oinari san) Some animals and plants that reproduce asexually “can in principle achieve essentially eternal life,” according to a University of Gothenburg press release. Scientists at the university are studying such species to find out how they avoid aging.

So far, one chemical appears to be key: telomerase. This is an enzyme that protects DNA. It is more active in the longest-lived people, so its benefits likely extend throughout the animal kingdom. BLOG: Mouse Engineered to ‘Grow Younger’ The animals that can possibly achieve immortality under ideal conditions, such as sea squirts, certain corals, Hydra, and Turritopsis nutricula (the immortal jellyfish), often activate telomerase. Out of the animal immortality A-list, sea squirts and starfish have genes that most closely resemble those of humans. Virus-eating virus identified in Antarctic lake. (PhysOrg.com) -- Deep within the waters of Antarctica's Organic Lake an Australian research team, led by microbiologist Ricardo Cavicchioli from the University of New South Wales, have discovered a new virophage, or virus eater.

Their findings were recently published in the Proceedings of the National Academies of Sciences. The new virophage was discovered by graduate student Sheree Yau and given the name Organic Lake Virophage, or OLV. The new virophage was identified when she noticed that sequences in the protein shell from the lake were similar to a previously discovered virophage named Sputnik. Sputnik, which was first discovered in the water-cooling tower in Paris in 2008, was the first virophage ever identified. Chemical found which 'makes bone marrow repair skin'