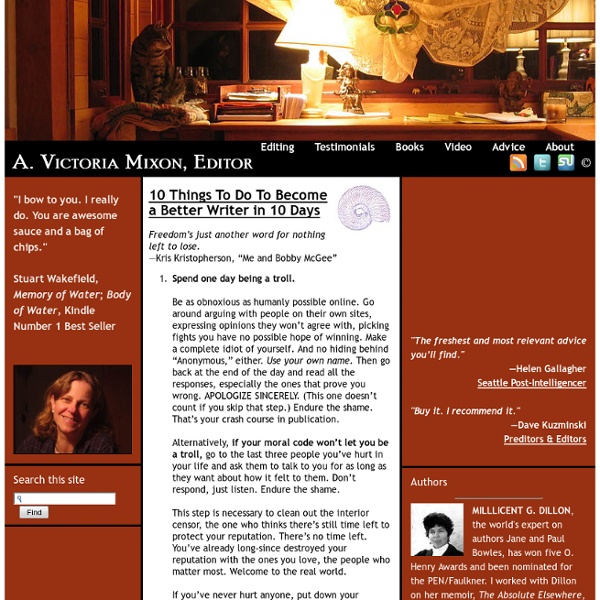 MILLLICENT G. DILLON, represented by Harold Ober Associates, is the world's expert on authors Jane and Paul Bowles. She has won five O. Henry Awards and been nominated for the PEN/Faulkner. I worked with Dillon on her memoir, The Absolute Elsewhere, in which she describes in luminous prose her private meeting with Albert Einstein to discuss the ethics of the atomic bomb. Read more. . . BHAICHAND PATEL, retired after an illustrious career with the United Nations, is now a journalist based out of New Dehli and Bombay, an expert on Bollywood, and author of three non-fiction books published by Penguin. LUCIA ORTH is the author of the debut novel, Baby Jesus Pawn Shop, which received critical acclaim from Publisher’s Weekly, NPR, Booklist, Library Journal and Small Press Reviews. SCOTT WARRENDER is a professional musician and Annie Award-nominated lyricist specializing in musical theater. GERALDINE EVANS is a best-selling British author. JUDY LEE DUNN is an award-winning marketing blogger.

60 Awesome Search Engines for Serious Writers June 20th, 2010 Finding the information you need as a writer shouldn’t be a chore. Luckily, there are plenty of search engines out there that are designed to help you at any stage of the process, from coming up with great ideas to finding a publisher to get your work into print. Both writers still in college and those on their way to professional success will appreciate this list of useful search applications that are great from making writing a little easier and more efficient. Professional Answer the...Call To Adventure: How Many Plots are There? For a long time now scholars have sought an answer to this question and depending on where you look and who you ask, you’re likely to get an answer of anything from two to two hundred. There are conflicting responses to this question because a definitive answer does not actually exist. A lot of writers would even argue that it’s pointless to even ponder such a thing. It seems to make sense, though, to look at what people have had to say about the issue and for writers to make up their own minds.

Three Rapid Reads For The Impatient Intellectual If there's one thing I've learned from the hassle of my daily commute, it's the delicate pleasure of a short story. Complete, yet compact, they are long enough to be engaging while still short enough to fit into your routine. So next time you find yourself with a few minutes to spare be sure to have one of these three collections ready. While one story may be the perfect length for a quick commute, I can't guarantee you'll be able to put it down once you reach your destination. Drown By Junot Diaz, Paperback, 224 pages, Riverhead Trade, list price: $15

COMPLETE COLLECTION OF POEMS BY RUDYARD KIPLING Kipling gained renown throughout the world as a poet and storyteller. He was also known as a leading supporter of the British Empire. As apparent from his stories and poems, Kipling interested himself in the romance and adventure which he found in Great Britain's colonial expansion. Kipling was born on Dec.30, 1865, in Bombay, where his father directed an art school. 25 ways to tighten your writing Writers rarely spit out their best copy on the first draft. (If you meet a writer who claims to have the secret for doing so, please let the rest of us know.) First drafts—and second and sometimes third drafts—exist to hash out your ideas on paper. After you've revised your book, story, blog post, or article until you can revise no more, you just hand it off to your editor to clean up, right? Well, that'd be ideal, but most of us don't have the luxury of hiring an expensive editor to review our personal blog post.

Synonyms for words commonly used in student's writing Amazing- incredible, unbelievable, improbable, fabulous, wonderful, fantastic, astonishing, astounding, extraordinary Anger- enrage, infuriate, arouse, nettle, exasperate, inflame, madden Angry- mad, furious, enraged, excited, wrathful, indignant, exasperated, aroused, inflamed Answer- reply, respond, retort, acknowledge 25 Things You Should Know About Character Previous iterations of the “25 Things” series: 25 Things Every Writer Should Know 25 Things You Should Know About Storytelling 100 best first lines from novels Following is a list of the 100 best first lines from novels, as decided by the American Book Review, a nonprofit journal published at the Unit for Contemporary Literature at Illinois State University: 1. Call me Ishmael. - Herman Melville, Moby-Dick (1851) 2. It is a truth universally acknowledged, that a single man in possession of a good fortune, must be in want of a wife. - Jane Austen, Pride and Prejudice (1813) 3.

Ono no Komachi Very little is known about this Japanese poetess, and most of it is legendary. She lived around 850 C.E. (b. 834?) Read 10 Free Articles by Hunter S. Thompson That Span His Gonzo Journalist Career (1965-2005) Most readers know Hunter S. Thompson for his 1971 book Fear and Loathing in Las Vegas: A Savage Journey to the Heart of the American Dream. But in over 45 years of writing, this prolific observer of the American scene wrote voluminously, often hilariously, and usually with deceptively clear-eyed vitriol on sports, politics, media, and other viciously addictive pursuits. (“I hate to advocate drugs, alcohol, violence, or insanity to anyone,” he famously said, “but they’ve always worked for me.”) The Ten Mistakes « Holt Uncensored - Pat Holt on Books, Book Publishing Industry, Reviews Like many editorial consultants, I’ve been concerned about the amount of time I’ve been spending on easy fixes that the author shouldn’t have to pay for. Sometimes the question of where to put a comma, how to use a verb or why not to repeat a word can be important, even strategic. But most of the time the author either missed that day’s grammar lesson in elementary school or is too close to the manuscript to make corrections before I see it.

Your Expertise is Worth Money: 5 Sites You Can Write For Plenty of people start blogging with the hope of making some money off their expertise. But it can be difficult to turn a profit on blogging: until you’ve built up a significant readership, you can expect only a few cents worth of Google AdSense revenue. There are certainly easier ways to earn money by writing about your area of expertise. There are plenty of sites that will pay for your short articles, although several have some drawbacks.