Advice and News from Glenn

Glenn Beck Says Trump Is A 'Frightening' Sociopath. Ted Cruz Tries to Justify Trump Endorsement to a Furious Glenn Beck. Glenn Beck left disillusioned after Sarah Palin endorses Trump: “Maybe the press was right about her” Unlike many in the right-wing talk radio sphere, Glenn Beck has long been a vocal detractor of Republican presidential frontrunner Donald Trump. 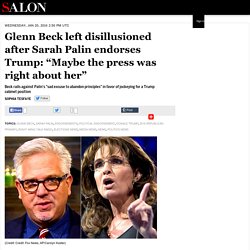 For months, Beck has stood in utter disbelief as his fellow conservative talkers have championed the campaign of the former reality TV star — a man Beck has described as “the biggest flaming [ass] that you could possibly imagine.” “These are smart people. What am I missing?” Beck incredulously asked last summer as “big names” like Sean Hannity, Ann Coulter, Michael Savage and Rush Limbaugh praised Trump’s overtly xenophobic campaign.

But now that The Donald has received the biggest endorsement of any Republican candidate in the race so far — from none other than Mama Grizzly herself, Sarah Palin — Beck is left completely disillusioned, forced to second guess his past support for the former half-term governor of Alaska and join with other conservatives in righteously mocking the pairing. Sarah Palin. I saw a clip of her talking to Donald Trump. 'Clock kid' Ahmed Mohamed demands $15M from city, school. Ahmed Mohamed is demanding $15 million in damages for hardships he and his family endured as a result of his arrest for bringing a homemade clock to school and the public fallout it sparked. 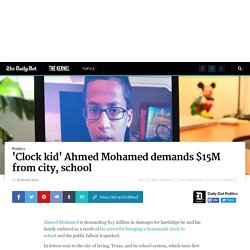 In letters sent to the city of Irving, Texas, and its school system, which were first reported by the Dallas Morning News, an attorney for Mohamed claimed that Irving ISD school officials planned to “trash Ahmed” in the media, falsely claimed that he had broken “zero tolerance” laws, and that police illegally questioned the 14-year-old alone after he requested that his parents be present, among other claims.

“In the large segment of the media who were anxious to label Ahmed as a budding bomb builder, the pencil case became a ‘briefcase’ or even a ‘suitcase.’” “The on-campus detention and 7-on-1 interrogation went on for approximately one hour and 25 minutes,” the letter to the city of Irving reads. “It was, in fact, tiny,” the letter continues. Glenn Beck: Rick Perry prayed for end to Texas drought — and God answered with devastating floods. Glenn Beck says former Texas Gov. 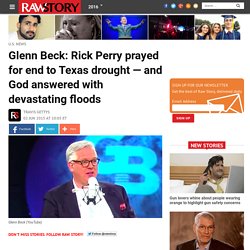 Rick Perry is responsible for flooding that has killed 27 people in the state – but he apparently thinks that’s a good thing. The conservative broadcaster said the devastating floods were God’s answer to Perry’s 2011 prayer proclamation to end a prolonged drought in Texas, reported Right Wing Watch. “We started digging our way out of that drought about three years ago, but that’s definitely over,” Beck said, agreeing with co-host Stu Burguiere that climate change could not have caused both the drought and the floods. He recently returned from vacation at his ranch in Idaho, where he said it had rained nearly every day after local residents took part in a fast for rain. “Five weeks ago, they had a fast for rain because they were in a drought – and it started raining five weeks ago,” Beck said. Burguiere said that was an interesting observation, and he noted Perry had prayed for rain several years ago. Glenn Beck: Hillary Clinton 'Will Be Having Sex With A Woman' In The White House If It Becomes Popular.

Hollywood juggernauts and best friends, Matt Damon and Ben Affleck, are no strangers when it comes to gay rumors. 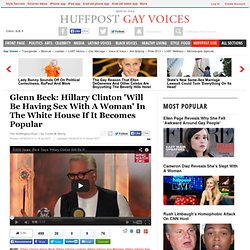 Their seemingly more than a bromance, which stems from their Boston upbringing, had never been denied, causing people to further believe the gossip until Damon decided to speak up about it in December 2012. Damon proclaimed: "I never denied those rumors because I was offended and didn’t want to offend my friends who were gay. Glenn Beck Worries About Pope Francis and His 'Marxist Tendencies' Glenn Beck has news that will “rock the nation,” change “everything” Glenn Beck: CNN interview with atheist tornado survivor was a setup! Glenn Beck Is Undeterred By Reality On Saudi Nationals And The Boston Bombings. Hours after it was debunked, Glenn Beck continued to beat the drum of a conspiracy theory that the Obama administration is deporting a Saudi national who was behind the tragic bombings at the Boston marathon. 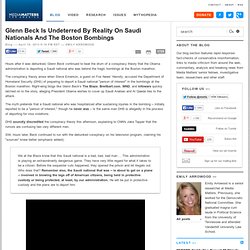 The conspiracy theory arose when Steve Emerson, a guest on Fox News' Hannity, accused the Department of Homeland Security (DHS) of preparing to deport a Saudi national "person of interest" in the bombings at the Boston marathon. Right-wing blogs like Glenn Beck's The Blaze, Breitbart.com, WND, and Infowars quickly latched on to the story, alleging President Obama wishes to cover up Saudi Arabian and Al Qaeda ties to the attack. Glenn Beck: “The burden of proof is on the federal government” to disprove my conspiracy theory. Glenn Beck Comes Up With Most Absurd Conspiracy Theory About Boston. April 22, 2013 | Like this article? 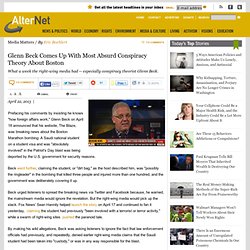 Join our email list: Stay up to date with the latest headlines via email. Prefacing his comments by insisting he knows "how foreign affairs work," Glenn Beck on April 18 announced that his website, The Blaze, was breaking news about the Boston Marathon bombing: A Saudi national student on a student visa and was "absolutely involved" in the Patriot's Day blast was being deported by the U.S. government for security reasons. Beck went further, claiming the student, or "dirt bag," as the host described him, was "possibly the ringleader" in the bombing that killed three people and injured more than one hundred, and the government was deliberately covering it up. Beck urged listeners to spread the breaking news via Twitter and Facebook because, he warned, the mainstream media would ignore the revelation. Glenn Beck: Boston Bombing? Buy Gold!