Advice Dog. About Advice Dog is a popular image macro series that that features a picture of the head of a smiling puppy on a multicolored color wheel background split into 6 colors. Usual derivatives are often accompanied by two lines of text written in a guidance / advising format with the advice given usually being very poor, unethical or deplorable. Since its debut, the series has spawned dozens of spin-offs referred to as Advice Animals of an animal’s head on a color wheel background or merely just an animal (including humans) with their own archetype personalities using the same two line image macro formula. Origin The original blank template originates from a Mario fan-site, The Mushroom Kingdom , forum thread titled “Guide to Kissing” .

Among several replies citing each of the poster’s poor experience with relationships, user TEM , real name; Evan Herrington, posted the first reply of “Just do it, man.”. Spread Notable Examples External References. Anti-Joke Chicken. About Anti-Joke Chicken is an image macro series featuring an image of a hen accompanied by a top line of text that sounds like the introduction of a joke, but the bottom line provides an unexpected anticlimax. 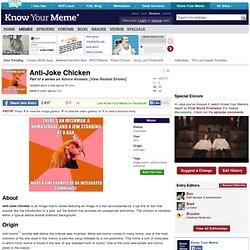 The chicken is centered within a typical advice animal starburst background. Origin Anti-humor existed well before the Internet was invented. While anti-humor comes in many forms, one of the most common is the one used in this meme: a joke-like setup followed by a non-punchline. Q:Why did the chicken cross the road? Dating back at least to the mid-1800s, this joke contains no inherent humor within the punchline, and is likely a partial inspiration for this meme. The above is the original photo on which the image macro was based. Spread A Reddit thread was created on February 20th, 2011 called “It’s the anti-joke chicken!!!!” I wish I had created this meme, but I must give credit where credit is due: these images were found deep in the ugly bowels of /b/. Anxiety Cat. About Anxiety Cat is an advice animal image macro series similar to Socially Awkward Penguin and Paranoid Parrot featuring a frightened-looking black cat accompanied by captions related to paranoia and social distress. 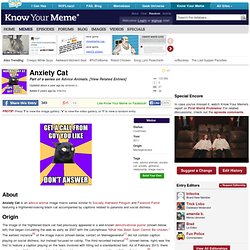 Origin The image of the frightened black cat had previously appeared in a well-known demotivational poster (shown below, left) that began circulating the web as early as 2007 with the catchphrase “What Has Been Seen Cannot Be Unseen.” The earliest instance of the image macro (shown below, center) on Memegenerator did not contain caption playing on social distress, but instead focused on catnip. The third recorded instance (shown below, right) was the first to feature a caption playing on the fears involved with filling out a standardized test. Spread A single topic Tumblr was created for Anxiety Cat in August 2011, posting an average of 100 images per month through February 2013. Notable Examples Search Interest External Links. Bad Joke Eel. About Bad Joke Eel is an advice animal image macro series featuring a close-up photograph of a Moray eel with various captions delivering unfunny puns and jokes, very similar to Lame Pun Coon. 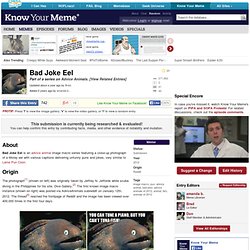 Origin The photograph (shown on left) was originally taken by Jeffrey N. Jeffords while scuba diving in the Philippines for his site, Dive Gallery. The first known image macro instance (shown on right) was posted via AdviceAnimals subreddit on January 12th, 2012. Prior to becoming associated with the title “Bad Joke Eel” on Reddit, the same image was used as a punchline for the phrase “That’s amore” by a commenter on FARK forum on October 13th, 2009 and in an image macro on the humor site So Much Pun on January 25th, 2011. Spread The Quickmeme entry for “Bad Joke Eel” was created on the same day of original Reddit post, spawning over 700 instances on the site in four days.

Notable Examples Search Interest [not available] External Links. Business Cat. About Business Cat is an advice animal image macro series featuring a cat in a tie in front of a starburst background. 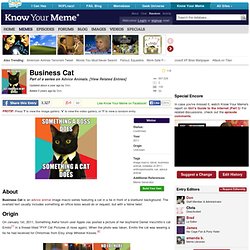 The overlaid text usually includes something an office boss would do or request, but with a feline twist. Origin On January 1st, 2011, Something Awful forum user Apple Jax posted a picture of her boyfriend Daniel Vecchitto’s cat Emilio in a thread titled "PYF Cat Pictures (it rises again). When the photo was taken, Emilio the cat was wearing a tie he had received for Christmas from Etsy shop Whisker Kisses. Three days later, the photo was reposted to Reddit with the title “Business Cat.” Spread I Can Has Cheezburger featured a Business Cat on January 26th, 2011. Notable Derivatives Template Search Interest Though there was some search traffic for Business Cat in February 2010, this is tied to a Japanese YouTube video about a similarly dressed feline.