Advice from the Experts

Twilight Zone Creator Rod Serling on Where Good Ideas Come From. A 5-Step Technique for Producing Ideas circa 1939. The Taste Gap: Ira Glass on the Secret of Creative Success, Animated in Living Typography. Einstein on Fairy Tales and Education. Being vs. becoming, Wendell Berry on solitude and our creative demons, the best biographies, memoirs, and history books of the year, and more. Hey Peggy Fleming! 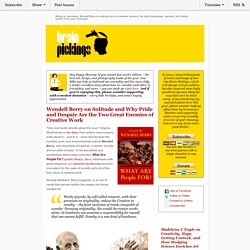 If you missed last week's edition – the best art, design, and photography books of the year, how Rilke can help us befriend our mortality and live more fully, a tender wordless story about how we ennoble each other in friendship, and more – you can catch up right here. And if you're enjoying this, please consider supporting with a modest donation – every little bit helps, and comes hugely appreciated.

Wendell Berry on Solitude and Why Pride and Despair Are the Two Great Enemies of Creative Work "One can't write directly about the soul," Virginia Woolf wrote in her diary. Ray Bradbury on Writing, Emotion vs. Intelligence, and the Core of Creativity. By Maria Popova “You can only go with loves in this life.” 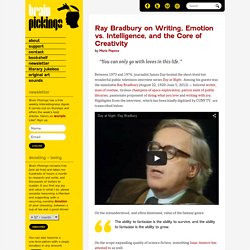 Between 1973 and 1974, journalist James Day hosted the short-lived but wonderful public television interview series Day at Night. Among his guests was the inimitable Ray Bradbury (August 22, 1920–June 5, 2012) — beloved writer, man of routine, tireless champion of space exploration, patron saint of public libraries, passionate proponent of doing what you love and writing with joy. Highlights from the interview, which has been kindly digitized by CUNY TV, are transcribed below. On the misunderstood, and often dismissed, value of the fantasy genre: The ability to fantasize is the ability to survive, and the ability to fantasize is the ability to grow. On the scope-expanding quality of science fiction, something Isaac Asimov has attested to as well: The great thing about growing up with science fiction is that you have an interest in everything.

On the formative influence of fairy tales and Greek myths A resounding secular “Amen!” Mark McGuinness. Mark Mark McGuinness I’m a poet, coach and creative entrepreneur, living in London, UK and coaching creatives worldwide via the magic of the internet. 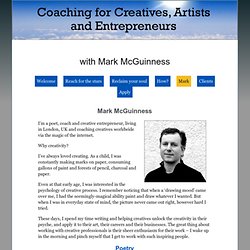 Why creativity? I’ve always loved creating. An Antidote to the Age of Anxiety: Alan Watts on Happiness and How to Live with Presence. By Maria Popova Wisdom on overcoming the greatest human frustration from the pioneer of Eastern philosophy in the West. 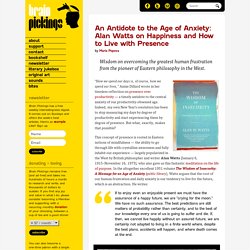 But what, exactly, makes that possible? This concept of presence is rooted in Eastern notions of mindfulness — the ability to go through life with crystalline awareness and fully inhabit our experience — largely popularized in the West by British philosopher and writer Alan Watts (January 6, 1915–November 16, 1973), who also gave us this fantastic meditation on the life of purpose. If to enjoy even an enjoyable present we must have the assurance of a happy future, we are “crying for the moon.” Pixar Cofounder Ed Catmull on Failure and Why Fostering a Fearless Culture Is the Key to Groundbreaking Creative Work. By Maria Popova Why the greatest enemy of creative success is the attempt to fortify against failure. 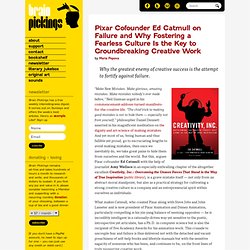 Ed Catmull (Photograph by Deborah Coleman, Pixar) Donating = Loving. Kierkegaard on Anxiety & Creativity. By Maria Popova “Because it is possible to create — creating one’s self, willing to be one’s self… — one has anxiety. 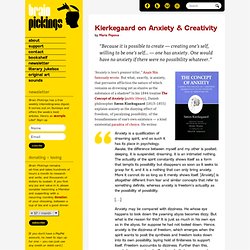 One would have no anxiety if there were no possibility whatever.” “Anxiety is love’s greatest killer,” Anaïs Nin famously wrote. T. S. Eliot on Idea Incubation, Inhibition, and the Mystical Quality of Creativity + a Rare Recording. 31 Quotes That Will Give You Chills.

The Definitive Manifesto for Handling Haters: Anne Lamott on Priorities and How We Keep Ourselves Small by People-Pleasing. Amy Tan: Where does creativity hide?

Related:  Quotes   -  Idioms, quotes, expressions/phrases & sayings   -  Be Inspired   -  Ray Bradbury   -  are you an INTROVERT?! yup, me too...   -  worth waching 3   -  meaning of life   -  in other words   -  Brain Pickings   -  Create   -  Good Reads :)   -  Articoli   -  Philosophy   -  Life   -  Creativity Practices   -  workIT Online   -  Creativity   -  Creativity Tools   -  Creative Inspiration   -  A 5-Step Technique for Producing Ideas circa 1939   -  Ray Bradbury on Writing, Emotion vs. Intelligence, and the Core of Creativity   -  An Antidote to the Age of Anxiety: Alan Watts on Happiness and How to Live with Presence   -  Pixar Cofounder Ed Catmull on Failure and Why Fostering a Fearless Culture Is the Key to Groundbreaking Creative Work   -  Kierkegaard on Anxiety & Creativity   -  T. S. Eliot on Idea Incubation, Inhibition, and the Mystical Quality of Creativity + a Rare Recording   -  31 Quotes That Will Give You Chills   -  The Definitive Manifesto for Handling Haters: Anne Lamott on Priorities and How We Keep Ourselves Small by People-Pleasing   -  Experts   -  Experts to Interview   -  GIN Experts   -  Experts   -  List of think tanks - Wikipedia, the free encyclopedia   -  50 Lists to Write to Lift Your Spirits « Demanding Joy   -  5 situations where it's better to tell than show in your fiction   -  Mr. Money Mustache — Early Retirement through Badassity   -  Etiquette in Japan - Wikipedia, the free encyclopedia   -  How Do We Prepare Students For Jobs That Don't Exist Yet? | Edudemic   -  How a 140-Character Twitter Resume Could Land Your Next Job   -  Decision-making - Wikipedia, the free encyclopedia   -  12 Items a Lady Should Keep in Her Purse-   -  30 Habits that Will Change your Life   -  12 Stressful Things to Stop Tolerating   -  10 principes fondamentaux – Société – Google   -  What's Your Learning Style?   -  The Crash Course   -  Education   -  Enterprise