Scumbag Steve. About Scumbag Steve is an image macro series featuring a kid with a sideways fitted cap standing in a hallway. The overlaid text generally centers around unethical behavior regarding drugs, partying, and other hedonistic behaviors. Origin The original image came from the cover of the album “Ma Gangsta” by the rap group Beantown Mafia. The first known image macros were posted in a compilation to Reddit in a thread that reached the front page on January 21st, 2011 and received 8,607 up votes prior to being archived. 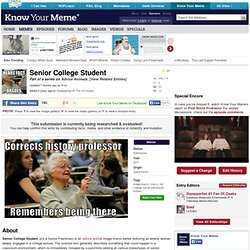 The overlaid text generally describes something that could happen in a classroom environment, which is immediately followed by a punchline jabbing at various stereotypes of senior citizens or grandparents. Origin The elderly woman depicted in the original photograph is Nola Ochs, a 99 year old Kansas resident who graduated from Fort Hays State University (FHSU) in 2007 and broke the Guinness World Record for world’s oldest college graduate at age of 95. Her record-setting graduation was covered by the U.S. news media, including MSNBC. The first known instance of “Senior College Student” surfaced on July 31st, 2011 on the image macro application site Quickmeme. 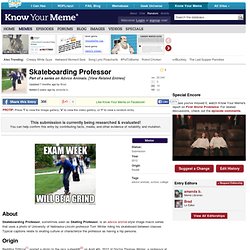 Typical captions relate to skating culture or characterize the professor as having a hip persona. Origin Redditor Tr0llzor posted a photo to the pics subreddit on April 4th, 2012 of Doctor Thomas Winter, a professor at the University of Nebraska Lincoln who became notorious for getting around the campus with a skateboard. The post hit the front page with 31,534 upvotes and 2521 points overall. Later that day, an image macro featuring the photo titled “Hip Professor Harold” was posted to the Advice Animals subreddit, but only received 6 points. Thomas Winter Doctor Thomas Winter, who is currently a classics and religious studies professor, has been teaching since 1970. Spread As of April 9th, 2012, the Quickmeme page has over 500 instances. Notable Examples.

Success Kid. About Success Kid, sometimes known as I Hate Sandcastles, is a reaction image of a baby at a beach with a smug facial expression. 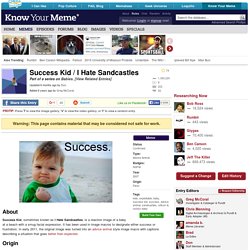 It has been used in image macros to designate either success or frustration. In early 2011, the original image was turned into an advice animal style image macro with captions describing a situation that goes better than expected. Origin The original image was taken by photographer Laney Griner of her then 11-month-old son Sammy on August 26th, 2007.

Spread As early as January 2008, users on social networking sites like MySpace began incorporating the photo of Sammy into their profiles, either as their avatar or as part of the page’s layout. Successful Black Man. About Successful Black Man, also known as “Successful Negro”, is an advice animal image macro series featuring a photo of a black man dressed in business attire superimposed in front of a brown and beige color wheel background. 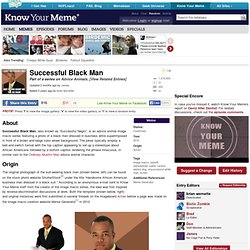 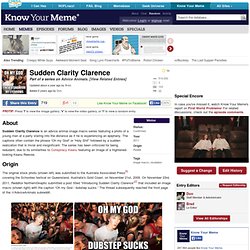 The captions often contain the phrase “Oh my God” or “Holy Shit” followed by a sudden realization that is trivial and insignificant. The series has been criticized for being redudant, due to its similarities to Conspiracy Keanu featuring an image of a frightened-looking Keanu Reeves. Origin The original stock photo (shown left) was submitted to the Australia Associated Press covering the Schoolies festival on Queensland, Australia’s Gold Coast. on November 21st, 2009. Spread On February 1st, 2012, the Internet humor site UpRoxx posted an article about the advice animal series with a slideshow of notable derivatives. The Most Interesting Man in the World.

About The Most Interesting Man In The World is an image macro series based on an advertising campaign for Dos Equis beer. 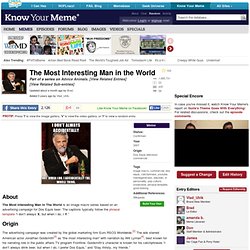 The captions typically follow the phrasal template “I don’t always X, but when I do, I Y.” Origin The advertising campaign was created by the global marketing firm Euro RSCG Worldwide. The ads starred American actor Jonathan Goldsmith as “the most interesting man” with narration by Will Lyman, best known for his narrating role in the public affairs TV program Frontline. The ads first aired in the United States in 2006 and were uploaded to the wistl1976 YouTube channel on April 10th, 2007.