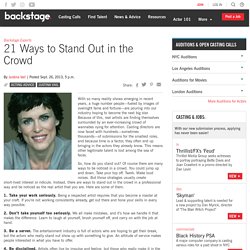 Because of this, real artists are finding themselves surrounded by an ever-increasing crowd of wannabes vying for attention. Casting directors are now faced with hundreds—sometimes thousands—of submissions for the smallest roles, and because time is a factor, they often end up bringing in the actors they already know. This means other legitimate talent is lost among the sea of faces. So, how do you stand out? Of course there are many ways to be noticed in a crowd. 1. 2. 3. 4. 5. 6. 7. 8. 9. 10. Are You on Your Path for Success this Season? 6 Red Flags When Auditing Acting Classes. By Joseph Pearlman | Posted March 8, 2013, 4 p.m. 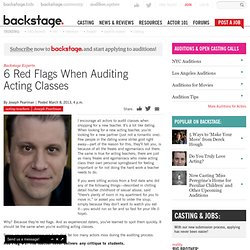 I encourage all actors to audit classes when shopping for a new teacher. It’s a lot like dating. When looking for a new acting teacher, you’re looking for a new partner (just not a romantic one). Few people in the dating scene strike gold right away—part of the reason for this, they’ll tell you, is because of all the freaks and egomaniacs out there. The same is true for acting teachers; there are just as many freaks and egomaniacs who make acting class their own personal springboard for feeling important or for not doing the hard work a teacher needs to do. If you were sitting across from a first date who did any of the following things—described in chilling detail his/her childhood of sexual abuse, said “there’s plenty of room in my apartment for you to move in,” or asked you not to order the soup, simply because they don’t want to watch you eat it—you would run so far and so fast for your life (I hope).

ARE YOU DIFFERENT? "There's no such thing as 'nervous'." Character Status: What It Is, And How It Changes Acting Choices. These days, when we think of the word status, we tend to think in terms of facebook. 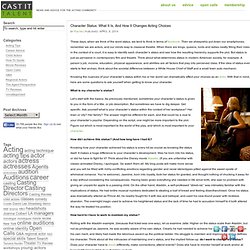 Then we sheepishly put down our smartphones, remember we are actors, and our minds leap to classical theatre. When there are kings, queens, lords and ladies neatly filling their roles in the context of a court, it is easy to identify each character’s status and see how the resulting hierarchy supports the plot. But status is just as pervasive in contemporary film and theatre. Think about what determines status in modern American society, for example. A person’s job, income, education, physical appearance, and abilities are all factors that play into perceived class. Knowing the nuances of your character’s status within his or her world can dramatically affect your choices as an actor. Covering It Up: Your Character’s Inner Life vs. Outer Life. The Little Things (Can Make a Character Great): Specifics and the Directive. EVERYTHING is supported, illuminated and deepened by your “SPECIFICS”–your “SPECIFIC CHOICES” in a scene. 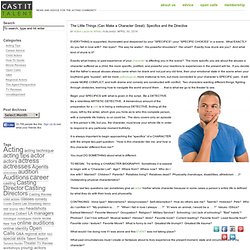 What EXACTLY do you fall in love with? Her eyes? The way he walks? His powerful shoulders? Her smell? Exactly what history or past experience of your character is affecting you in the scene? Begin your SPECIFICS with what is given in the script. It is always important to begin approaching the “specifics” of a CHARACTER with the simple two-part question: “How is this character like me, and how is this character different from me?” You must DO SOMETHING about what is different. TO BEGIN: Try writing a CHARACTER BIOGRAPHY. These last two questions can sometimes give an actor his/her whole character because in some cases a person’s entire life is defined by what they do with their body and physicality. How to Improve Your Networking Skills. “But I just want to act,” your inner artist voice laments. 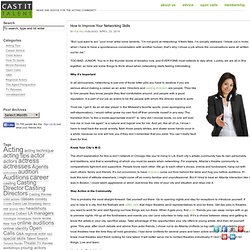 “I’m not good at networking. It feels fake. I’m socially awkward. I break out in hives when I have to have a spontaneous conversation with another human, that’s why I chose a job where the conversations were all written out for me.” Ways to Work on Your Craft Daily: Part I. As actors, the inescapable truth is that we’re likely to spend only a small percentage of our time actually performing a role onstage or in front of a camera. 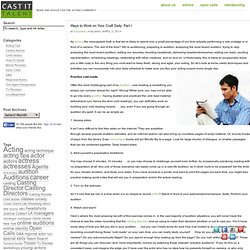 The rest of the time? We’re auditioning, preparing to audition, analyzing the most recent audition, trying to stop analyzing the most recent audition, editing our resumes, shooting headshots, delivering headshots/resumes, editing our reels, courting representation, scheduling meetings, networking with other creatives, and on and on. Unfortunately, this is liable to occasionally leave you a little rusty in the very thing you most want to keep fresh, strong and agile: your acting.

So let’s look at some useful techniques and activities you can incorporate into your daily schedule to make sure you flex your acting muscle every single day. Practice cold reads. Often the most challenging part of an audition, cold reading is something you simply can not plan ahead for, right? 1. It isn’t very difficult to find free sides on the internet.