Vanguard thinks its own employees should own this fund, not the S&P 500. They’re right. Mill Day — Greater Fool – Authored by Garth Turner – The Troubled Future of Real Estate. Infinite Banking and Bank on Yourself: Scams or Wise Investments? A friend was considering buying into "Infinite Banking" or "Bank on Yourself", which is a sort of whole life insurance policy that allows you to borrow on your own money once you're fully vested. 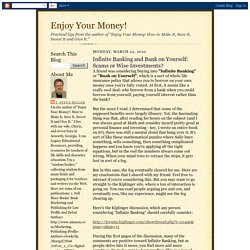 At first, it seems like a really cool deal: why borrow from a bank when you could borrow from yourself, paying yourself interest rather than the bank? Why People Are Still Getting The TFSA vs. RRSP Debate Wrong - Financial Uproar. Back in the day, I wrote why Warren Buffett would be a bad personal finance blogger. 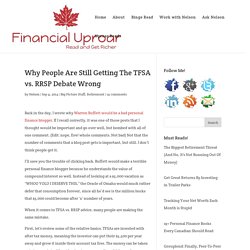 If I recall correctly, it was one of those posts that I thought would be important and go over well, but bombed with all of one comment. (Edit: nope, five! Whole comments. Not bad) Not that the number of comments that a blog post gets is important, but still. The love asset. Over 40% of marriages in this strange country end in tears. 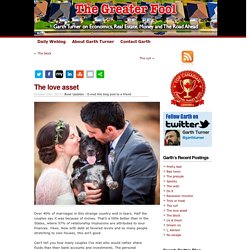 Half the couples say it was because of money. That’s a little better than in the States, where 57% of relationship implosions are attributed to sour finances. Yikes. Now with debt at fevered levels and so many people stretching to own houses, this ain’t good. Can’t tell you how many couples I’ve met who would rather share fluids than their bank accounts and investments.

“The stigma, shame and embarrassment of being financially unwell often prevents people from taking action to address and overcome these issues. Do it. Do it. Legal advice. Eric’s a fancy lawyer in southern Ontario. 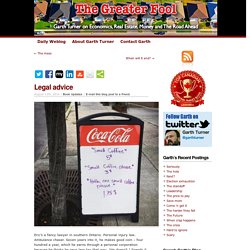 Personal injury law. Legal advice. The outlier. Those who think this is an anti-property site, as opposed to simply being a dog blog gone bad, are wrong. 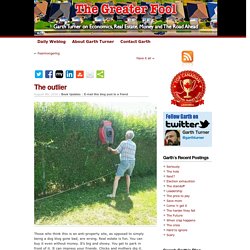 Real estate is fun. You can buy it even without money. The right kind of real estate. Meet Doug Rowat, who joins us as a guest blogger, as did Ryan Lewenza, whom you eviscerated last week. 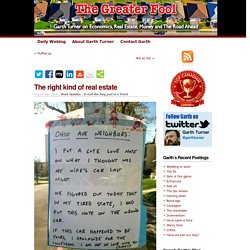 Like Ryan, Doug’s a Portfolio Manager with the financial practice I founded, Turner Investments, where he shares responsibility for managing almost half a billion dollars. A cool Bay Street dude, Doug’s been a Vice President in charge of research and strategy for Raymond James, plus a highly successful fund manager at HSBC Securities, where he worked for a decade. What can I do with my U.S. Retirement Plan (401(k) or IRA)? - Written by Brent Soucie, Consultant, CPA, CA September 25, 2013 Several Canadians have worked in the United States at one time or another. 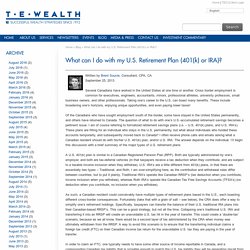 Cross border employment is common for executives, engineers, accountants, minors, professional athletes, university professors, small business owners, and other professionals. Taking one’s career to the U.S. can boast many benefits. These include broadening one’s horizons, enjoying unique opportunities, and even paying lower taxes! Of the Canadians who have sought employment south of the border, some have stayed in the United States permanently, and others have returned to Canada. A U.S. 401(k) plan is similar to a Canadian Registered Pension Plan (RPP). The Signs We Need To Look For – To Profit From Cheap Money – Cody Shirk. We can look at the previous link of loan delinquencies to see when/what corporations are paying back, but the true result in the market will reflect through $HYG. 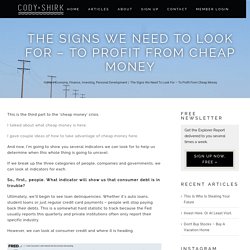 (There are other similar stocks out there, but I’m picking $HYG as it’s the most popular.) If we see $HYG start to waver, or decline significantly, we know what is happening. Corporations are not paying back their loans. These are high risk loans (junk bonds), so they will be the first to fall – and will serve as a good indicator for the wider market. Third is governments. Realtor 101. Are realtors redundant? 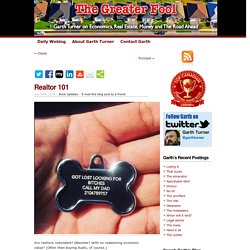 Obsolete? With no redeeming economic value? Courage. The banks pay you one half of one percent to keep money there. 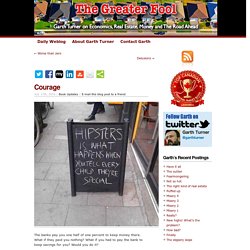 What if they paid you nothing? What if you had to pay the bank to keep savings for you? Salvation. Just as some people (Trump supporters mostly) think there are only two kinds of music (country and western), millions believe only two investments exist. Houses (safe) and stocks (scary). The revolt. July’s usually a yawner. Not this time. On the heels of Brexit comes the ascent of Trump, the wounding of Clinton, more hurt from the ISIS nutjobs and, weirdly, Scottish independence. In two weeks American Republicans gather in Cleveland for a convention that could be the most troubling since the 1960s (Google,“The whole world is watching”). A week later Democrats do the same. Hitting the fan. Bench art at Coal Harbour park, Vancouver. Blog Dog photo. (Click to enlarge) There were open houses this weekend at 2348 Oliver Crescent, a few blocks in from Granville in the Arbutus hood of Vancouver.

It’s a demand area, close to downtown, but it’s also a symbol. At least this house is. The little short. How Much Is Enough? – Millennial Revolution. Too scary. So, what happens to society, the economy, financial assets and houses when things change? What? Think again. Think again. Choices. The quandary. The crime. The price of advice. Matt has a problem. Too little money. Crispy. Leftie peril. No escape. The unexpected. The Rule. The Crash Course. The Deflation Monster Has Arrived. Astenbeck Capital 2015 Annual Letter - Oil Will Soar. Be prepared. Head start. Canada's best and worst online brokers in 2014. Dead cats. My Own Advisor - Saving and investing my way to financial freedom. Independent Personal Finance Advice Since 1981 - Canadian MoneySaver. From scratch — Greater Fool – Authored by Garth Turner – The Troubled Future of Real Estate. Mr. Money Mustache — Early Retirement through Badassity.

Related:  Effetto risorse & collaterals   -  Hobbies   -  Religion   -  mney   -  Zu lesen/anschauen   -  debt economy   -  Zu lesen/anschauen 3   -  The Crash Course   -  Mr. Money Mustache — Early Retirement through Badassity   -  Writing Advice   -  Bookbub Marketing Advice   -  Web Design and Web Development Tips & Advice   -  Local SEO Tips and Advice   -  Content Marketing Tips and Advice   -  Writing Advice   -  Job Seeking Advice   -  Writerisms and other Sins: A Writer's Shortcut to Stronger Writing | SFWA   -  Strunk, William, Jr. 1918. The Elements of Style   -  The Female Character Flowchart | Overthinking It   -  » 10 Things To Do To Become a Better Writer in 10 Days | A. Victoria Mixon, Editor   -  101 Short Stories that Will Leave You Smiling, Crying and Thinking   -  50 Lists to Write to Lift Your Spirits « Demanding Joy   -  Fairy Tales Can Come True   -  5 situations where it's better to tell than show in your fiction   -  Ira Glass on Storytelling on Vimeo   -  Manuscript Format for Novels   -  Etiquette in Japan - Wikipedia, the free encyclopedia   -  How Do We Prepare Students For Jobs That Don't Exist Yet? | Edudemic   -  How a 140-Character Twitter Resume Could Land Your Next Job   -  25 Things Writers Should Stop Doing « terribleminds: chuck wendig   -  Decision-making - Wikipedia, the free encyclopedia   -  12 Items a Lady Should Keep in Her Purse-   -  30 Habits that Will Change your Life   -  12 Stressful Things to Stop Tolerating   -  25 Things You Should Know About Word Choice « terribleminds: chuck wendig   -  How to Build an App Empire: Can You Create The Next Instagram?   -  10 principes fondamentaux – Société – Google   -  City and Town Name Generator for RPGs and Writers   -  What's Your Learning Style?   -  Education   -  Enterprise