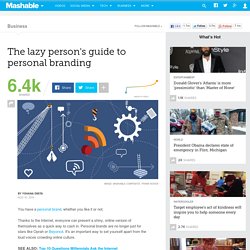 Thanks to the Internet, everyone can present a shiny, online version of themselves as a quick way to cash in. Personal brands are no longer just for stars like Oprah or Beyoncé. 11 ways to gauge your next employer's culture. Sizing up personalities is easy. 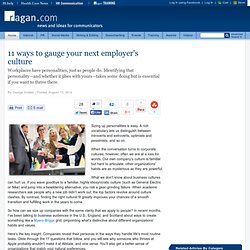 A rich vocabulary lets us distinguish between introverts and extroverts, optimists and pessimists, and so on. Why You Hate Work. Photo THE way we’re working isn’t working. 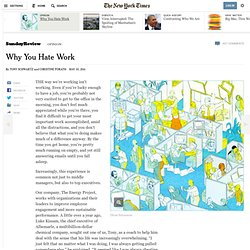 Even if you’re lucky enough to have a job, you’re probably not very excited to get to the office in the morning, you don’t feel much appreciated while you’re there, you find it difficult to get your most important work accomplished, amid all the distractions, and you don’t believe that what you’re doing makes much of a difference anyway. By the time you get home, you’re pretty much running on empty, and yet still answering emails until you fall asleep. Increasingly, this experience is common not just to middle managers, but also to top executives. Our company, The Energy Project, works with organizations and their leaders to improve employee engagement and more sustainable performance.

Continue reading the main story Regular time for creative or strategic thinking Ability to focus on one thing at a time. Lessons from the world's most successful people. The best career advice is universal. 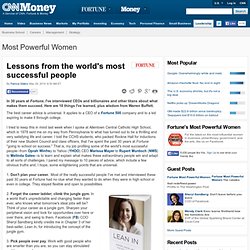 It applies to a CEO of a Fortune 500 company and to a kid aspiring to make it through college. I tried to keep this in mind last week when I spoke at Allentown Central Catholic High School, which in 1978 sent me on my way from Pennsylvania to what has turned out to be a thrilling and very satisfying life and career. I told the CCHS students, who packed Rockne Hall for inductions of their new Student Council and class officers, that I've spent the past 30 years at Fortune "going to school on success.

" SO YOU FAIL. NOW BOUNCE BACK! - May 1, 1995. By PATRICIA SELLERS REPORTER ASSOCIATE PATTY DE LLOSA PHOTOGRAPH BY BRIAN SMITH PHOTOGRAPHS BY PETER GREGOIRE (FORTUNE Magazine) – If ever there were a failure destined to kill a career, New Coke was it. 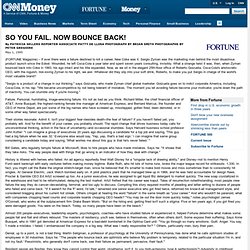 Sergio Zyman was the marketing man behind the most disastrous product launch since the Edsel. Wounded, he left Coca-Cola a year later and spent seven years consulting, invisibly. How Successful People Stay Calm. 8 Hiring Experts Reveal Their Favorite Interview Questions. What you need to know before your next job interview. Did you know 33 percent of employers say they know in the first 90 seconds of an interview whether they'll hire you? 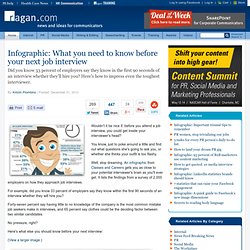 Here's how to impress even the toughest interviewer. By Kristin Piombino | Posted: December 31, 2013 Wouldn't it be nice if, before you attend a job interview, you could get inside your interviewer's head? You know, just to poke around a little and find out what questions she's going to ask you, or whether she thinks your outfit is too flashy. Well, stop dreaming. For example, did you know 33 percent of employers say they know within the first 90 seconds of an interview whether they will hire you? Forty-seven percent say having little to no knowledge of the company is the most common mistake job seekers make in interviews, and 65 percent say clothes could be the deciding factor between two similar candidates. 20 Things 20-Year-Olds Don't Get. Discover Your Personal Narrative - Dorie Clark. By Dorie Clark | 9:00 AM June 28, 2013 I recently had coffee with a senior partner at a large consulting firm. 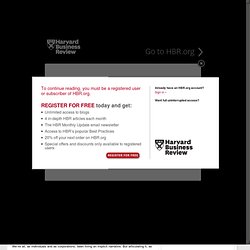 He’d just had a “milestone birthday” and now hoped to shift into roles that felt more meaningful to him — speaking, writing, teaching, and becoming a thought leader. He had great contacts; newspaper columns and teaching positions could be his for the asking. The only problem, he told me, was he didn’t know what he wanted to say. Should he focus on the industry practice areas where he’d made his name? CEOs Share 10 Key Topics They Focus on During the Day. Lots of concerns keep CEOs up at night, as we know from this well-worn query often posed to top corporate leaders. 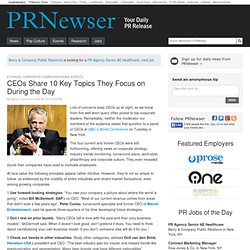 Remarkably, neither the moderator nor members of the audience asked that question to a panel of CEOs at IABC’s World Conference on Tuesday in New York. The four current and former CEOs were still forthcoming, offering views on corporate strategy, industry trends monitoring, turnaround plans, work style, philanthropy and corporate culture. They even revealed stunts their companies have used to motivate employees. At face value the following principles appear rather intuitive. However, they’re not so simple to follow, as evidenced by the volatility of entire industries and recent market fluctuations, even among growing companies. The Only Interview Question You Need To Ask. How to Get a Job at Google.

14 Things Successful People Do On Weekends. Jobs fight: Haves vs. the have-nots. As USA TODAY celebrates it 30th anniversary, we interviewed some of the USA's greatest visionaries to talk about the world of tomorrow: How we'll live, learn and travel, what we'll do and who we'll be. 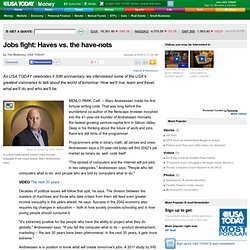 MENLO PARK, Calif. -- Marc Andreessen made his first fortune writing code. That was long before the wunderkind co-author of the Netscape browser morphed into the 41-year-old founder of Andreessen Horowitz, the fastest-growing venture-capital firm in Silicon Valley. Deep in his thinking about the future of work and jobs, there are still hints of the programmer. Programmers write in binary math, all zeroes and ones. Andreessen says a 20-year-old today will find 2042's job market as binary as, well, code itself. "The spread of computers and the Internet will put jobs in two categories," Andreessen says. The Fortunes Of Solitude: Susan Cain On Introverts, The "New Groupthink," And The Problems With Brainstorming. Bill Gates, Craig Newmark, and Mark Zuckerberg have more in common than being highly successful founders of tech companies. 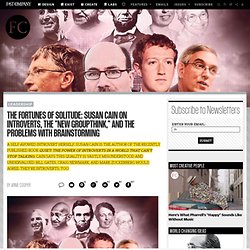 How to Present to Senior Executives - Nancy Duarte. By Nancy Duarte | 11:00 AM October 4, 2012 Senior executives are one of the toughest crowds you’ll face as a presenter. They’re incredibly impatient because their schedules are jam-packed — and they have to make lots of high-stakes decisions, often with little time to weigh options. So they won’t sit still for a long presentation with a big reveal at the end. They’ll just interrupt you before you finish your shtick. Most liked presentations of all time. How To Stand In Front Of A Room Full Of People And Tell A Stellar Story. It happened 18 years ago, but Kevin Allison remembers the moment like it was yesterday. He was up on stage at the Luna Lounge in the Lower East Side of Manhattan, doing a monologue. One paragraph in, his mind went completely blank and he could not for the life of him remember his next line.

Allison stared wide-eyed at the audience. 5 Habits of Highly Effective Communicators. ‘The best advice I’ve received about PR’ As public relations and marketing professionals, we’ve all received advice from savvy minds. Whether in school or early or late into your career, there is probably one nugget of advice that has stuck with you to this day. Primal Leadership: The Hidden Driver of Great Performance. The Idea in Brief. 10 Steps to Executive-Level Confidence. What Do Marc Cuban, Zappos & Steve Wynn Have in Common? The Core Qualities of Leadership. 7 Goal-Oriented Tips For The Unapologetic Careerist. The Six Lessons I Live By.