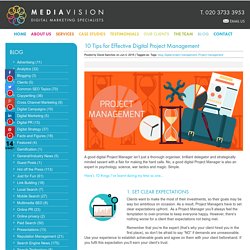 No, a good digital Project Manager is also an expert in psychology, science, war tactics and magic. Simple. Here’s 10 things I’ve learnt during my time as one… Clients want to make the most of their investments, so their goals may be way too ambitious on occasion. As a result, Project Managers have to set clear expectations upfront. Remember that you’re the expert (that’s why your client hired you in the first place), so don’t be afraid to say “NO” if demands are unreasonable. No, we’re not referring to fancy ‘infinite-scrolling’ pages here! In my experience, it’s always best to meet the client personally on their premises, if possible, as this will give you a much deeper insight than you’ll be able to gather by simply reading reports, documents and seeing pictures. 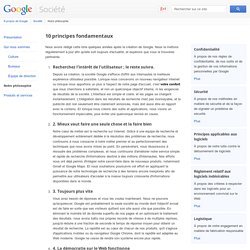 L'interface est simple et claire, et les pages se chargent instantanément. How to Get the Best Out of Your Agency. When you appoint an agency, you want the best from them. You want them to deliver what they have promised and more importantly, you want your work load to be lightened. A great agency should be a support system for you and should push the brand’s boundaries. Sometimes it’s hard to get that balance between rapport and a working relationship. There is a fine line between micro managing and working closely together. Saving Face: Don't Make a $12 Billion Mistake. 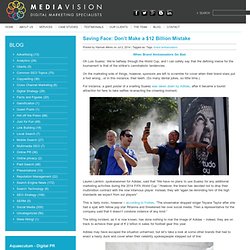 We’re halfway through the World Cup, and I can safely say that the defining meme for the tournament is that of the striker’s cannibalistic tendencies. On the marketing side of things, however, sponsors are left to scramble for cover when their brand stars put a foot wrong…or in this instance, their teeth. (So many dental jokes, so little time.) For instance, a giant poster of a snarling Suarez was taken down by Adidas, after it became a tourist attraction for fans to take selfies re-enacting the crowning moment.

Lauren Lamkin, spokeswomen for Adidas, said that “We have no plans to use Suarez for any additional marketing activities during the 2014 FIFA World Cup.” This is fairly ironic, however – according to Forbes, “The shoemaker dropped singer Teyana Taylor after she had a spat with fellow pop star Rihanna and threatened her over social media. Model Problems Sporting Behavior. Ensuring Your Football World Cup Digital Campaign is No Foul. The 2014 Football World Cup “kicks off” on 12th June in Brazil. 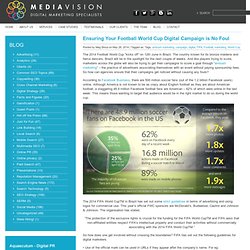 The country known for its bronze maidens and fierce dancers, Brazil will be in the spotlight for the next couple of weeks. And like players trying to score, marketers across the globe will also be trying to get their campaigns to score a goal through “ambush marketing” – the practice of advertisers associating themselves with an event without paying sponsorship fees. So how can agencies ensure that their campaigns get noticed without causing any fouls?

According to Facebook Business, there are 500 million soccer fans (out of the 1.2 billion Facebook users) online. Although America is not known to be as crazy about English football as they are about American football, a staggering 48.9 million Facebook football fans are American – 62% of which were online in the last week. The 2014 FIFA World CupTM in Brazil has set out some strict guidelines in terms of advertising and using logos for commercial use. Pitches Be Crazy: Your Guide to Finding The Digital Agency That's Right for Your. It’s time to go shopping for your perfect-fit agency. 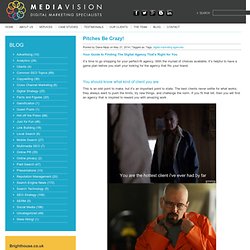 With the myriad of choices available, it’s helpful to have a game plan before you start your looking for the agency that fits your brand. You should know what kind of client you are This is an odd point to make, but it’s an important point to state. The best clients never settle for what works; they always want to push the limits, try new things, and challenge the norm. If you fit that bill, then you will find an agency that is inspired to reward you with amazing work. In the words of the legendary Spice Girls: Yo tell them what you want… what you really, really want. Before even beginning the search for an agency, have a digital plan in mind for your website, social profile, etc.