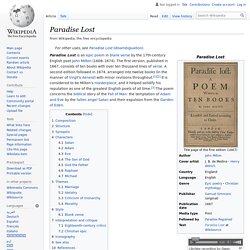 Swadharma. There is no proper equivalent in English for the Sanskrit term 'Dharma'. 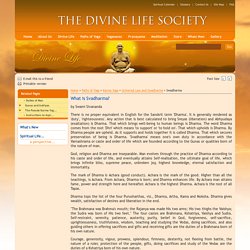 It is generally rendered as 'duty', 'righteousness'. Any action that is best calculated to bring Sreyas (liberation) and Abhyudaya (exaltation) is Dharma. Svadharma. Svadharma. Un article de Wikipédia, l'encyclopédie libre. 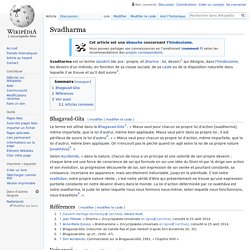 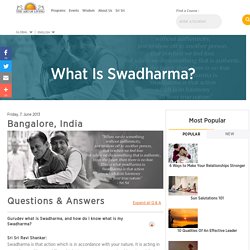 Who are you? Good Question to ask yourself. Who were you in your past life? That is a secret, I will tell you some other time. Sva-dharma. Svadharma. Citation styles Encyclopedia.com gives you the ability to cite reference entries and articles according to common styles from the Modern Language Association (MLA), The Chicago Manual of Style, and the American Psychological Association (APA).

Within the “Cite this article” tool, pick a style to see how all available information looks when formatted according to that style. Then, copy and paste the text into your bibliography or works cited list. Because each style has its own formatting nuances that evolve over time and not all information is available for every reference entry or article, Encyclopedia.com cannot guarantee each citation it generates. 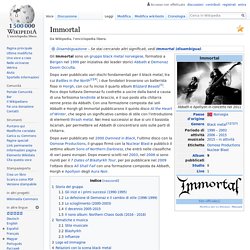 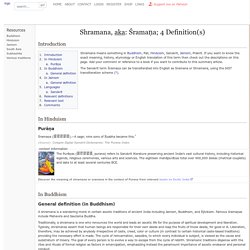 If you want to know the exact meaning, history, etymology or English translation of this term then check out the descriptions on this page. Add your comment or reference to a book if you want to contribute to this summary article. Purāṇa. Shramana Movement - General Knowledge Today. 3 Shares Share The Shramana movement was a Non-Vedic movement parallel to Vedic Hinduism in ancient India. 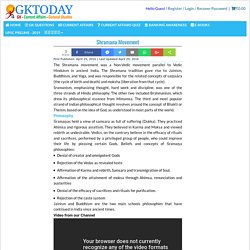 The Shramana tradition gave rise to Jainism, Buddhism, and Yoga, and was responsible for the related concepts of saṃsāra (the cycle of birth and death) and moksha (liberation from that cycle). Sramanism, emphasizing thought, hard work and discipline, was one of the three strands of Hindu philosophy. The other two included Brahmanism, which drew its philosophical essence from Mimamsa. Philosophy. Śramaṇa. Buddhism and Jainism are two of many Indian philosophies considered as Śramaṇic traditions. 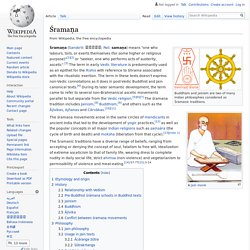 Śramaṇa (Sanskrit: श्रमण; Pali: samaṇa) means "one who labours, toils, or exerts themselves (for some higher or religious purpose)"[1][2] or "seeker, one who performs acts of austerity, ascetic".[3] The term in early Vedic literature is predominantly used as an epithet for the Rishis with reference to Shrama associated with the ritualistic exertion. The term in these texts doesn't express non-Vedic connotations as it does in post-Vedic Buddhist and Jain canonical texts.[4] During its later semantic development, the term came to refer to several non-Brahmanical ascetic movements parallel to but separate from the Vedic religion.[5][6][7] The śramaṇa tradition includes Jainism, Buddhism,[9] and others such as the Ājīvikas, Ajñanas and Cārvākas.[10][11] Etymology and origin[edit]

Grihastha. Grihastha (Sanskrit: gr̥hastha) literally means "being in and occupied with home, family" or "householder".[1] It refers to the second phase of an individual's life in a four age-based stages of the Hindu ashram system.[2] It follows Brahmacharya (bachelor student) life stage, and embodies a married life, with the duties of maintaining a home, raising a family, educating one's children, and leading a family-centred and a dharmic social life.[3][4][5] This stage of Ashrama is conceptually followed by Vanaprastha (forest dweller, retired[6]) and Sannyasa (renunciation).[3] Combined with other three life stages, Hindu philosophy considers these stages as a facet of Dharma concept, something essential to completing the full development of a human being and fulfilling all the needs of the individual and society.[3][7] In Indian traditions, Grihastha stage of life is a recommendation, but not a requirement. 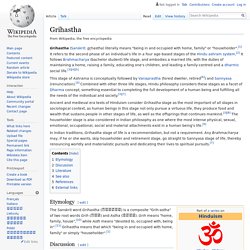 Etymology[edit] Discussion[edit] Shudra. The word Shudra appears only once in the Rig veda but is found in other Hindu texts such as the Manusmriti, Arthashastra and Dharmashastras. Theoretically, Shudras have constituted the hereditary labouring class serving others but in reality they have shared occupations with other varnas, including being traders and warriors.[5][6][7] In some cases, they participated in the coronation of kings, or were ministers and kings according to early Indian texts.[8][9] Texts[edit] Vedas[edit] The term Shudra appears only once in the Rigveda.[10] This mention is found in a verse in the Purusha Sukta which is one of its 1,028 hymns.[12][13]

Vaishya. Traditional duties[edit] Hindu religious texts assigned Vaishyas to traditional roles in agriculture and cattle-rearing, but over time they came to be landowners, traders and money-lenders.[1] Therefore making it their responsibility to provide sustenance for those of higher class, since they were of lower class.[2] The Vaishyas, along with members of the Brahmin and Kshatriya varnas, claim dvija status ("twice born", a second or spiritual birth) after sacrament of initiation as in Hindu theology.[3] Indian and Nepali traders were widely credited for the spread of Hindu culture to regions as far as southeast Asia and Tibet respectively.[4] Historically, Vaishyas have been involved in roles other than their traditional pastoralism, trade and commerce.

According to historian Ram Sharan Sharma, the Gupta Empire was a Vaishya dynasty that "may have appeared as a reaction against oppressive rulers".[5] Kshatriya. Ruling and warrior class in the Hindu Varna system of Nepal and India Origins[edit] Early Rigvedic tribal chiefdom[edit] The administrative machinery in the Vedic India was headed by a tribal chief called Rajan whose position was not hereditary.

The king was elected in a tribal assembly, which included women, called Samiti. The Rajan protected the tribe and cattle; was assisted by a priest; and did not maintain a standing army, though in the later period the rulership appears to have risen as a class. Later Vedic period[edit] The hymn Purusha Sukta to the Rigveda describes the symbolic creation of the four varna-s through cosmic sacrifice (yajña). Brahman. Brahman. Not to be confused with Brahma, the Hindu god, or brahmin, the caste or varna.

In Hinduism, Brahman (/ˈbrɑːmən/; Sanskrit: ब्रह्मन् brahman) is "the unchanging reality amidst and beyond the world",[1] which "cannot be exactly defined". Common land. Common land is land owned collectively by a number of persons, or by one person, but over which other people have certain traditional rights, such as to allow their livestock to graze upon it, to collect wood, or to cut turf for fuel.[1] A person who has a right in, or over, common land jointly with another or others is called a commoner.[2] This article deals mainly with common land in Great Britain. Although the extent there is much reduced due to enclosure of common land from the millions of acres that existed until the 17th century, a considerable amount of common land still exists, particularly in upland areas, and there are over 7,000 registered commons in England alone.[3][4] Common land or former common land is usually referred to as a common; for instance, Clapham Common or Mungrisdale Common.

Commons. Shared resources The commons is the cultural and natural resources accessible to all members of a society, including natural materials such as air, water, and a habitable earth. These resources are held in common, not owned privately. Mediœval history - Israel Smith Clare. Lords Spiritual. The Lords Spiritual of the United Kingdom are the 26 bishops of the established Church of England who serve in the House of Lords along with the Lords Temporal. The Church of Scotland, which is Presbyterian, and the Anglican churches in Wales and Northern Ireland, which are no longer established churches, are not represented. Ranks and titles[edit] The Church of England comprises 42 dioceses, each led by a diocesan bishop.

Lords Temporal. This article is about the secular members of the British House of Lords. Lords Spiritual and Temporal - Glossary page. Agrarian society. An agrarian society (or agricultural society) is any society whose economy is based on producing and maintaining crops and farmland. Another way to define an agrarian society is by seeing how much of a nation's total production is in agriculture. In an agrarian society cultivating the land is the primary source of wealth. Definition of Shaman by Merriam-Webster. Shamanism: 7 Keys to Understanding & Practicing Shamanism. Shamanism. Shamanism. The earliest known depiction of a Siberian shaman, produced by the Dutch explorer Nicolaes Witsen, who authored an account of his travels among Samoyedic- and Tungusic-speaking peoples in 1692. Kama Sutra. Moksha. Kama. Deity Kama whose arrows trigger desire. Artha. Dharma.