Paris Protests: American Charged Over Attack on Cops in Patrol Car. PARIS — A 27-year-old American man has been given preliminary charges of attempted murder in an exceptionally violent attack on police in their patrol car that drew national attention, the Paris prosecutor's office said Sunday. 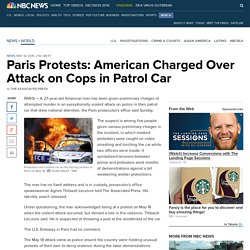 The suspect is among five people given various preliminary charges in the incident, in which masked protesters were caught on video smashing and torching the car while two officers were inside. It symbolized tensions between police and protesters amid months of demonstrations against a bill weakening worker protections. The man has no fixed address and is in custody, prosecutor's office spokeswoman Agnes Thibault-Lecuivre told The Associated Press. His identity wasn't released. Under questioning, the man acknowledged being at a protest on May 18 when the violent attack occurred, but denied a role in the violence, Thibault-Lecuivre said. The U.S. Paris tourism hit by attacks, protests. What life looks like for refugees in France.

When I arrived at The Jungle camp in Calais one of the first things I saw was some graffiti on a slab of concrete spelling out the words “Fuck Journalist, Fuck The Police”. 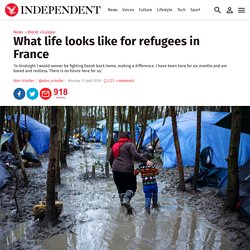 It turned out not everyone in the camp shared this sentiment, but once you feel the tangible sense of frustration and anger in Calais among the people in the camp, it soon becomes clear why a message like this would end up surfacing. I want to share my experience of the camps in Calais and Dunkirk from ground level. I have been visiting the camps with fellow photojournalist Emily Garthwaite over the past few weeks (5 March for a few days and 18 March for another few days) . We wanted to understand the challenges posed for those who work and live around these areas and spoke with refugees, local policing authorities, the head of Calais commerce, medical teams, local residents and volunteers to try and grasp the bigger picture. 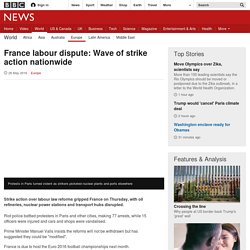 Riot police battled protesters in Paris and other cities, making 77 arrests, while 15 officers were injured and cars and shops were vandalised. Prime Minister Manuel Valls insists the reforms will not be withdrawn but has suggested they could be "modified". France is due to host the Euro 2016 football championships next month. Euro 2016: Terror Test-Run Causes Chaos at Stade de France. PARIS — France surrounded its largest soccer stadium with a 7-foot fence and deployed 1,700 security personnel in a bid to prevent repeats of November's ISIS bombing — but all did not go to plan. 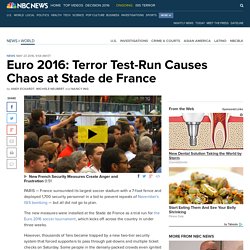 The new measures were installed at the Stade de France as a trial run for the Euro 2016 soccer tournament, which kicks off across the country in under three weeks. However, thousands of fans became trapped by a new two-tier security system that forced supporters to pass through pat-downs and multiple ticket checks on Saturday. Some people in the densely-packed crowds even ignited fireworks. Supporters were "screaming, shoving and tension was high," according to cameraman Alexis Duclos, who was filming the event for NBC News. Christiana Figueres: The inside story of the Paris climate agreement. Paris still struggling 6 months after 'Black Friday' terror attacks. PARIS — The winding cobblestone streets of Paris' swanky Le Marais district usually bustle with tourists this time of year, but its trendy bars, bistros and boutiques are uncommonly quiet. 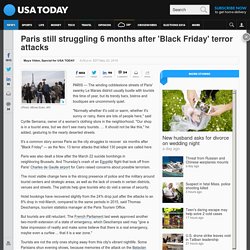 "Normally whether it's cold or warm, whether it's sunny or rainy, there are lots of people here," said Cyrille Semama, owner of a women's clothing store in the neighborhood. "Our shop is in a tourist area, but we don't see many tourists. … It should not be like this," he added, gesturing to the nearly deserted streets. It's a common story across Paris as the city struggles to recover six months after "Black Friday" — as the Nov. 13 terror attacks that killed 130 people are called here. Paris was also dealt a blow after the March 22 suicide bombings in neighboring Brussels.

And Thursday's crash of an EgyptAir flight that took off from Paris' Charles de Gaulle airport for Cairo raised concerns about possible terrorism. But tourists are still reluctant. "He killed many people," she said. France tells Paris police to crack down on Uber. Interior Minister Bernard Cazeneuve said Thursday that he asked the Paris police authority to issue a decree forbidding activity by UberPOP drivers. 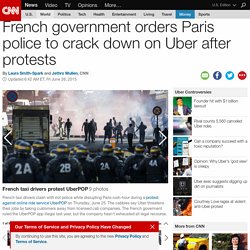 Similar decrees have already been issued in other major French cities. Cazeneuve said vehicles using UberPOP will now "be systematically seized" by police when caught operating. Paris attacks: What happened on the night. EgyptAir crash: Inquiry into why Flight MS804 vanished. A major investigation is under way after an EgyptAir passenger jet disappeared over the Mediterranean. 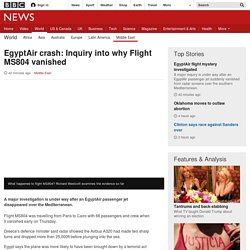 Flight MS804 was travelling from Paris to Cairo with 66 passengers and crew when it vanished early on Thursday. Greece's defence minister said radar showed the Airbus A320 had made two sharp turns and dropped more than 25,000ft before plunging into the sea. Egypt says the plane was more likely to have been brought down by a terrorist act than a technical fault. Live updatesWhat we knowRelatives wait at airports A major search operation involving Egyptian, Greek, French and British military units is taking place near the Greek island of Karpathos. So far, no wreckage or debris from the aircraft has been found. EuroHist9.