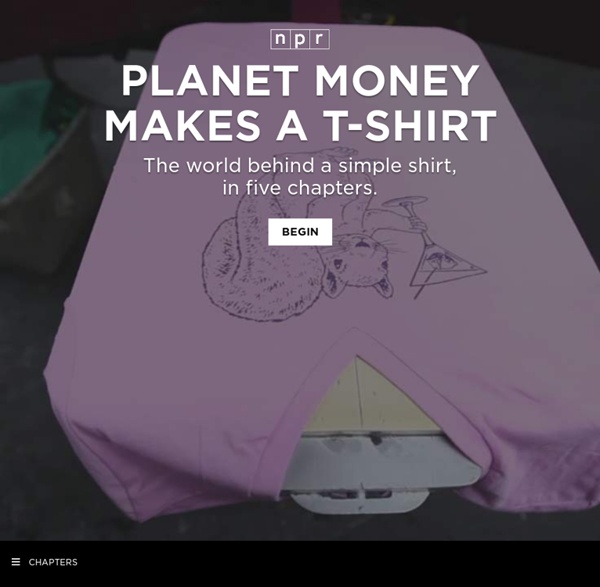 Why A T-Shirt? We wanted to see the hidden world behind clothes sold in this country, so we decided to make a T-shirt. We wanted to make an ordinary shirt like the vast majority of the shirts sold in this country — not organic cotton, not hand-sewn in the United States. To figure out how many shirts to make, and to raise money to pay for them, we turned to Kickstarter. Our goal was to sell 2,000 shirts. In the end, we sold 25,000. (Thanks again to everyone who ordered a shirt. Why A Squirrel? The design on the shirt, a squirrel hoisting a martini glass, is a visual pun: a reference to the phrase “animal spirits” made famous by the economist John Maynard Keynes. As Planet Money’s David Kestenbaum put it recently: “Keynes’ idea was that there’s more to the markets than just numbers; there are people and emotions making decisions. 10 Reporters, 3 Continents, 1 Archipelago We flew drones over Mississippi. More T-Shirt Stories! For more, subscribe to the Planet Money podcast. Credits

Map Men: teaching geography through comedy Mark Cooper-Jones and Jay Foreman tap into a rich vein of geographical quirks to teach through comedy ‘Maps are probably the best gateway into geography,’ argues comedian Mark Cooper-Jones. ‘They have become trendy, and cool. People are even putting them up on their walls.’ For any geography teacher looking for ways to make the world’s many maps, and the various strange geographical oddities they portray, funny and yet still educational, they should definitely watch Map Men. Short, snappy videos produced and presented by comedian map-fans Cooper-Jones and Jay Foreman, Map Men explores interesting stories about maps from the UK and overseas, merging snippets of educational information with quick-fire jokes and sketches.

'American Panorama' Is a Historical Atlas for the 21st Century When Charles Paullin’s Atlas of the Historical Geography of the United States first appeared in 1932, it was hailed as a “monument to historical scholarship.” Its 700 maps traced nearly every dimension of American life across the country’s geographical bounds—its natural history, its settlement by Europeans, the spread of railroads, state boundaries, suffrage, and much else. Paullin, a naval historian, hoped his meticulous research and beautiful renderings would inspire new research into history’s old narratives. They did. And yet for nearly a century, no other project really attempted to match its depth.

Bound to Be Beautiful: Foot Binding in Ancient China June 4, 2005–August 28, 2005 Bound to Be Beautiful: Footbinding in Ancient China is a traveling exhibit from the collection of John K. Fong featuring many pairs of the beautiful and elaborate shoes worn by Chinese women to showcase their tiny feet, along with items used in construction of the footwear. Over sixty objects include vintage photographs and related works of art in wood, metal and ivory. Throughout history, beauty has been a major goal. untitled Expectant mothers in the U.S. remain at a high risk for pregnancy-related death. (iStock) Around the globe, statistics show that as education levels for women rise, fertility levels drop. Sociologist Philip Cohen puts it this way: “Women with more education have more opportunities for productive lives doing work other than childbearing.” Some conservative writers and politicians have warned ominously that this presents a “reverse Darwinism,” and a survival of the weakest. But a new report by the Pew Research Center has found something surprising: more highly educated women in the United States are becoming mothers than ever before.

Reshaping the Body: Clothing & Cultural Practice Cessation of Bound Feet during the Communist Era Excerpts from When I was a girl in China, stories collected by Joseph Rupp Li Xiu-ying I started binding when I was fourteen, a typical age to begin. I had to let them out once after liberation, though. So that’s why my feet aren’t so small anymore. Refugee Stories: Mapping a Crisis - The Choices Program Objectives Students will: Explore the human geography of the current refugee crisis.Employ data to create a map of the crisis.Examine one refugee’s story and use it to map his or her experiences.Consider challenges facing the international community and weigh responses to the crisis. Resources Handout – Key Terms

Fluyt The merchant vessel responsible for 17th century Dutch trade dominance The fluyt or fluitschip was one of the first ocean-going ships built exclusively for commerce. Previously, ships tended to be built to perform the dual role of fighting battles and carrying cargo. Thus, their construction was fairly robust and they carried cannons, ammunition, and combat personnel. The Dutch did away with that.