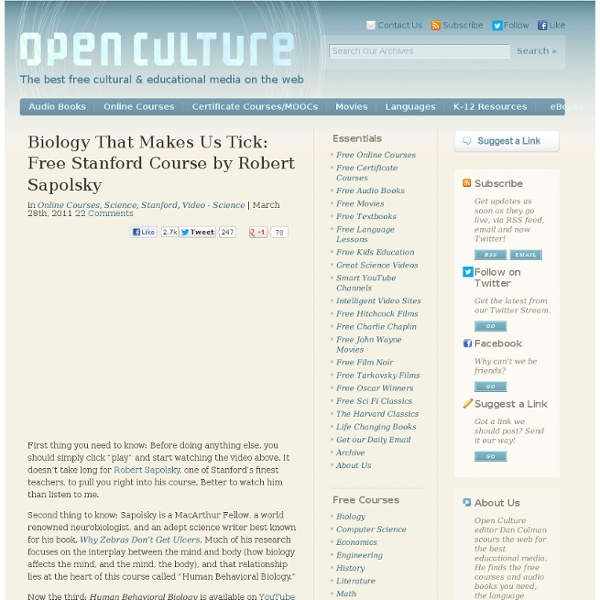 First thing you need to know: Before doing anything else, you should simply click “play” and start watching the video above. It doesn’t take long for Robert Sapolsky, one of Stanford’s finest teachers, to pull you right into his course. Better to watch him than listen to me. Second thing to know: Sapolsky is a MacArthur Fellow, a world renowned neurobiologist, and an adept science writer best known for his book, Why Zebras Don’t Get Ulcers. Much of his research focuses on the interplay between the mind and body (how biology affects the mind, and the mind, the body), and that relationship lies at the heart of this course called “Human Behavioral Biology.” Now the third: Human Behavioral Biology is available on YouTube and iTunes for free. Related Content: Robert Sapolsky Breaks Down Depression Dopamine Jackpot!

Complicity and the Brain: Dynamics in Attractor Space Dr. Peter Henningsen peter@alifegames.com Abstract: Slow Motion Dancing This completely mesmerizing dance video was created by the music/dance group World Order which is led by former martial artist Genki Sudo. Intended as a message of hope, you can find Genki Sudo’s message to the Japanese and the world in these trying times below the video. “The unprecedented disasters unfolding in Japan; earthquakes, tsunami, and nuclear explosions, will somehow change things to come.

Flowers in Ultra-Violet The compilation of species will continue to be updated at irregular intervals. All species listed here have been documented, and links are added whenever I can find spare time for updating. These images are made for illustrative purposes, not as artistic statements per se. Guns Reduce Crime For The Motion Stephen Halbrook Represents the NRA in suits against the DC and Chicago handgun bans Halbrook's most recent book is The Founders' Second Amendment.

9 Mindfulness Rituals to Make Your Day Better “Smile, breathe and go slowly.” - Thich Nhat Hanh, Zen Buddhist monk Post written by Leo Babauta. Are you simply moving through your day, without fully living? Twitter for Mac update When Twitter for Mac launched at the beginning of the year it received praise for its simplicity, speed and look. It also came packed with features like auto-shortened URLs, Tweets appearing in real-time, and multi-account support.Today, we’re releasing the first major update to Twitter for Mac. Some of the highlights: See multiple timelines at once. 15 Amazing Animated Shorts We all love short animated films, but creating short film is very hard task. Putting whole story in 5 to 10 minutes is not easy. Can you imagine? Few films produced after working hard more than 6 years! Here we collected 15 dazzling animated short films for your inspiration.

Behavioural biologist Frans de Waal to give Freedom Lecture - News - News & Events Behavioural biologist Frans de Waal is to give this year's Freedom Lecture on 4 June in the Pieterskerk in Leiden. De Waal has many years of experience researching the behaviour of the species of anthropoid apes. Moral behaviour in animals The title of De Waal's lecture will be From Ape to to Angel:Bosch, Bonobos and Morality without God. He will demonstrate in his lecture that moral behaviour is older than mankind, an idea that has so far not gained general acceptance.

The Language Learner’s NOT To Do List To do lists seem like a good idea in theory, but they have one major disadvantage: there is an infinite number of potential to do items. With this in mind, Timothy Ferriss, best-selling author of The 4-Hour Workweek (and a speaker of 6 languages), recommends “not to do lists” instead. Since they isolate a finite set of behaviors that are getting between you and your goals, they are far more effective than traditional to do lists. This tool applies perfectly to language learning, where most learners waste a lot of time on ineffective methods and bad materials.

Cool Interior Tree Home: Best Kids Bedroom Design Ever? There are a lot of ways to make a nice bedroom, but for kids there is an element of excitement that is just as important as bedroom size and style. As these pictures illustrate, a cool bedroom for children can be a virtual fantasy world in itself – in this case by making the outdoors the driving interior design idea and central concept of the bedroom space. Complete with climbing ropes, ladders, swings and all kinds of hidden storage spaces, this bedroom brings all of the elements of an outdoor play space inside and makes the room feel like a self-sufficient home at the same time. The best part, of course, is the tree house in the center of the room – who would not have enjoyed that as a kid growing up? Pick the Perfect Swimsuit for your Body Type – as told by Lauren Conrad! The lovely Lauren Conrad is getting ready for summer. On her website, she blogged about swimwear pick for every body type out there! Now you do not have to stress about searching for that perfect summer suit.

Shake the Dust A poem that will shake you… “Do not let one moment go by that doesn’t remind you that your heart beats 900 times a day, and there are enough gallons of blood to make everyone of you oceans” ~ Anis Mojgani In the back of a large room at Powel’s Bookstore I was half-heartedly listening to a poet I had never heard of. I was checking my email off my phone and wondering what I would scrounge up for dinner. And slowly, like he was lifting my chin up with one finger from my stressed and distracted world, he brought me back.