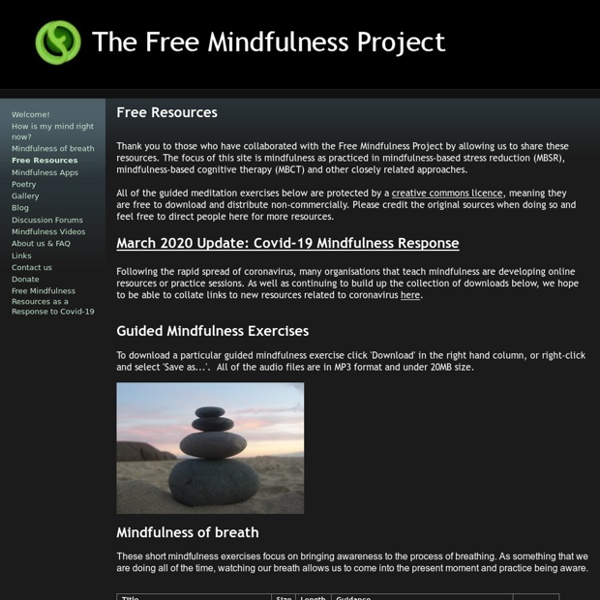 Guided Mindfulness Exercises To download a particular guided mindfulness exercise click 'Download' in the right hand column, or right-click and select 'Save as...'. All of the audio files are in MP3 format and under 20MB size. Mindfulness of breath These short mindfulness exercises focus on bringing awareness to the process of breathing. Brief mindfulness practices Body scan Body scan meditations invite you to move your focus of attention around the body, being curious about your experience and observing any sensations that you become aware of. Sitting meditations Sitting meditations often use the breath as the central focus of the practice. Mindful movement Mindful movement practices involve some form of intentional movement such as walking, yoga, tai chi or simple stretching. Guided imagery Self Guided Mindfulness Exercises Sometimes we wish to practice a meditation of our choosing without any guidance. Is there something else you would like to see in this section? Related:  HOMEROOM CIRCLES

Could mindfulness help teachers manage stress? | Teacher Network | Guardian Professional Over the last few years I have undergone a gentle transformation through the development of a personal mindfulness practice. I didn't notice the impact at first; but now I can see the positive effects of mindfulness in my life every day. Mindfulness has helped me train my 'monkey-mind', which is how I describe a mind that buzzes all over the place without focusing on what really needs attention. Mindfulness is when we are aware of and focused on what we are doing. I can now watch my thoughts, well most of the time anyway, and find they are much less likely to take over and consume me. I find this skill really helpful; spending less time going over and over the same problem. I sleep better and find I live less on autopilot feeling more awake, calmer and worrying less about what happened yesterday and what could go wrong tomorrow. About three years ago I came across the Mindfulness in Schools Project‎.

of Halloween - Halloween Halloween is a holiday celebrated each year on October 31, and Halloween 2021 will occur on Sunday, October 31. The tradition originated with the ancient Celtic festival of Samhain, when people would light bonfires and wear costumes to ward off ghosts. In the eighth century, Pope Gregory III designated November 1 as a time to honor all saints. READ MORE: Halloween Through the Centuries: A Timeline Ancient Origins of Halloween Halloween’s origins date back to the ancient Celtic festival of Samhain (pronounced sow-in). This day marked the end of summer and the harvest and the beginning of the dark, cold winter, a time of year that was often associated with human death. In addition to causing trouble and damaging crops, Celts thought that the presence of the otherworldly spirits made it easier for the Druids, or Celtic priests, to make predictions about the future. By 43 A.D., the Roman Empire had conquered the majority of Celtic territory. All Saints' Day Halloween Comes to America

7 Mindfulness Tips For Busy People With Hectic Lives Mindfulness helps us achieve healthier, more comfortable lives by lowering stress. And if you’re a busy person with a hectic life, that’s exactly what you need. A spiritual and cultural practice that comes to us from the Far East, mindfulness helps monks change their body temperatures, withstand hypothermic-level cold, and keep a hopeful outlook no matter what conditions surround them. But you don’t have to convert to another religion or renounce the world and become a priest or nun. Science has isolated some core practices of mindfulness and we now know that your state of mind is everything. It helps keep you healthy, makes you a good problem-solver, and puts you in a state of “flow” — handling a myriad of problems with what seems to be seamless grace to people watching you. Let’s check out a few simple mindfulness tips you can leverage for positive results: 1. Before falling asleep at night, appreciate your pillow. 2. Look at the person as if you’d never seen them before. 3. 4. 5. 6. 7.

Google honours Hedy Lamarr, inventor of technology behind Wi-Fi and Bluetooth Hedy Lamarr: from actress to inventor Google pays tribute to Hollywood actress-turned-inventor Hedy Lamarr on the 101st anniversary of her birth. Renaissance woman Hedy Lamarr could not be accused of living a dull life. Even before fleeing her loveless marriage to a Nazi arms dealer to become a Hollywood star, Lamarr had captured international attention as the first female actor to simulate an orgasm in a non-pornographic film. But none of this, presumably, is why Google has chosen to honour the Austrian-American with a Doodle on what would be her 101st birthday. Any girl can be glamorous, all you have to do is stand still and look stupid. She is remembered for her beauty on the silver screen, but the Hollywood actor spent her nights inventing a weapons communication system that was a precursor to wireless technologies including Bluetooth and Wi-Fi. Hedy Lammar was the first female Hollywood star to simulate an orgasm on screen "Hedy didn't drink. Hedy Lamarr at a press conference.

seek.com Wait! 4 common email mistakes to avoid Career advice – 31 July 2015 Sending a clear, concise and grammatically correct email seems like a no-brainer. We all send them, whether it’s to colleagues or external workers; from our phones, homes, or desks, and yet consistently, mistakes are made. Most of the time, these mistakes are minor, quickly forgotten as the key message of the email is taken and acted on, but other times, they can be disastrous. Like turning up to a job interview in shabby attire, sending well-written emails is about presentation and professionalism. Incorrect names or titles.

The Butterfly Effect: Creating shiny girls . . . The Daily SuDoku Welcome to the Daily SuDoku! Today's SuDoku is shown on the right. Click the grid to download a printable version of the puzzle. But how do I do it? The object is to insert the numbers in the boxes to satisfy only one condition: each row, column and 3x3 box must contain the digits 1 through 9 exactly once. The rules of the new Monster Sudokus are exactly the same, but more numbers and letters are needed. 12x12 puzzles require the numbers 1 to 9 and A, B and C in each row, column and 3x4 box. 16x16 puzzles need 0 to 9, and the letters A to F. Want more? Take a look at the Daily SuDoku E-Books.

The Conversation: In-depth analysis, research, news and ideas from leading academics and researchers. Beloved teen Sam Berns dies at 17 after suffering from rare disease Saturday night could have been a moment for Sam Berns to celebrate -- standing in the middle of Gillette Stadium, flanked by some of his beloved New England Patriots, and no doubt cheered heartily by the nearly 70,000 fans surrounding him. But it wasn't to be. Instead of having Berns as an honorary captain in their NFL playoff with the Indianapolis Colts, the Patriots held a moment of silence for the young man who inspired them and many others as he lived with progeria, which causes premature, accelerated aging. "Do it for Sammy!" Berns died Friday evening due to complications from the rare genetic disease, according to the Progeria Research Foundation. He was 17. "I loved Sam Berns and am richer for having known him," Patriots owner Robert Kraft said. Kraft, one of the most well-respected owners in his sport, wasn't Berns' only fan. More than anything, Sam lived. "Even though I have many obstacles in my life, I don't want people to feel bad for me," Berns said in that TedX talk. "Fly High."

Sleeping and Memory Memory is an aspect of cognitive functioning that involves the encoding, storage, consolidation and recall of experiences, learning and recognition. The process of memory formation is afforded by the ability of the brain to make basic structural changes within the synapses (the junction between neurons). These changes create biochemical associations with the events being recorded. This process is called synaptic plasticity. Although memories are encoded very quickly in the brain (in milliseconds), they are also being changed during consolidation. Beyond instantaneous encoding of memories, the other processes of memory formation require sleep. Memory stabilization proceeds faster during sleep whether daytime nap or nocturnal sleep. The Different Stages of Sleep Cycle Although sleep appears to be a linear progression of rest and dreams, it is really a cycle of 5 stages. The 5 stages of sleep are divided into REM (rapid eye movement) and NREM (non-rapid eye movement) sleep. In Conclusion