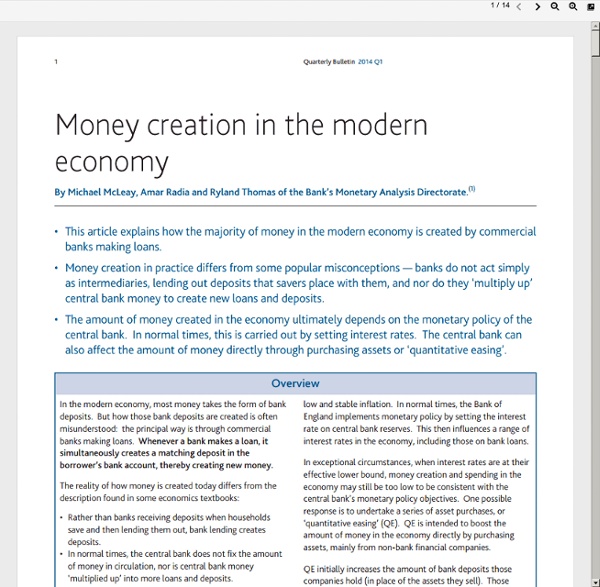 And what about the money? On September 15, 2008, six years ago, Lehman Brothers collapsed. Despite a “tsunami” of reforms, the financial system has not been transformed. To change finance, there might be a need to change our basic understanding of the financial system. This come-back to fundamentals has led reformers as well as central bankers to focus on money itself. By Fabien Hassan, guest poster* Since its creation in 2012, Finance Watch has been trying to have an impact on the regulatory agenda in Europe, and has achieved some remarkable results (see annual report for 2013). But what of the reforms that have not made it onto the mainstream legislative agenda? The role of money in macroeconomics Mainstream economics, a science which deals with prices, wealth, and production essentially claims that money doesn't matter. In the 1970s, opponents of Keynesianism built on this conception to develop the so-called “quantitative theory of money”. Who are the advocates of monetary reform? Image © Positive Money

201103_ClassroomEdition.pdf How Uber and the Sharing Economy Can Win Over Regulators - Sarah Cannon, and Lawrence H. Summers Sharing economy firms are disrupting traditional industries across the globe. For proof, look no further than Airbnb which, at $10 billion, can boast a higher valuation than the Hyatt hotel chain. Uber is currently valued at $18.2 billion relative to Hertz at $12.5 billion and Avis at $5.2 billion. These firms bring significant economic, environmental, and entrepreneurial benefits including an increase in employment and a reduction in carbon dioxide emissions (in the case of car sharing services). However, rather than rolling out the red carpet, city governments have resisted many of these new entrants issuing subpoenas and cease-and-desist orders. Regulation is often the most significant barrier to future growth for sharing economy firms. The relationship between sharing economy firms and regulators will likely remain uneasy for the foreseeable future. Be responsive to regulators’ legitimate concerns. Use state of the art approaches to reaching out to government.

201104_ClassroomEdition.pdf Can companies do better by doing less? | Guardian Sustainable Business In mainstream economics and politics, “growth” is a largely unquestioned good, generally associated with positive attributes like “progress” or “innovation”. “Degrowth”, on the other hand, connotes negative trends like recession, decline, unemployment and social disruption. Viewed from this angle, the idea of voluntary degrowth seems bizarre. Not surprisingly, when policymakers and business leaders look for solutions to environmental and social crises, they usually focus on technology-based “growth” strategies like “green growth”, geo-engineering and carbon capture. However, a growing number of scientists have argued that growth-based technology solutions alone will not be able to stop the dramatic human overuse of nature, or eradicate poverty. Even so, degrowth – either voluntary or as a result of ecological and economic crises – is still not considered a realistic alternative by most mainstream economists. Building degrowth communities – and economies Changing the global conversation

“The circular economy is the basis of a new EU industrial policy” | Europe’s World The European Commission’s paper “For a European Industrial Renaissance” underlines the importance of boosting manufacturing industry’s share of the EU’s GDP to around 20% by 2020 from 15% today. To reach that, adjustments to the regulatory framework will be vital. Although derided sometimes as the “old continent”, Europe is nevertheless very well placed to kick-start a new industrial era around the world thanks to its wealth of productive infrastructure, its skilled workforce and innovation capital. But first, what must Europe, as cradle of the industrial revolution, do to re-invent itself and re-think the future? Faced with unprecedented price rises and volatility on commodities markets, Europe’s industrial economy needs tangible solutions if it is to be at the forefront of globalisation. “The throughput economy has since the industrial revolution been based on a take-make-dispose flow of resources and energy no longer provides the socio-economic solutions we need”

The Sharing Economy on the Collaborative Commons The following essay is excerpted from The Zero Marginal Cost Society: The Internet of Things, the Collaborative Commons, and the Eclipse of Capitalism, by Jeremy Rifkin and appears at Common Dreams with permission. A powerful new economic movement has taken off overnight. A younger generation is beginning to share goods and services on a global Collaborative Commons. The distributed, collaborative nature of the Internet allows millions of people to find the right match-ups to share whatever they can spare with what others can use. This is a different kind of economy -- one far more dependent on social capital than market capital. And it's an economy that lives more on social trust rather than on anonymous market forces. Much of what we own goes unused some of the time. Like other shareable brokers, Airbnb gets only a small cut from the renter and owner for bringing them together. Airbnb is a private firm operating in a shared Internet Commons.

Economic Shift: The Rise of the Collaborative Commons | Big Think | Think Tank “We are just beginning to glimpse the bare outlines of an emerging new economic system--the collaborative commons,” explains economist Jeremy Rifkin, the New York Times bestselling author of The Zero Marginal Cost Society. In our new series on disruption, Rifkin discusses the forces shaping our economy and what we can expect in the years to come. “This is the first new economic paradigm to emerge on the world scene since the advent of capitalism and socialism in the early 19th century. So it's a remarkable historical event.” Rifkin is a prominent voice on the forefront of what he calls the Third Industrial Revolution, the era in which technology is shaping economies to be more energy efficient and collaborative. “What's really interesting is the trigger that's giving birth to this new economic system. The heart of this transformation is collaborative commons, which, Rifkin says, is emerging from the old paradigm of capitalism.

10 things we learned in recent circular economy live chat | Guardian Sustainable Business | Guardian Professional 1. The circular economy is about the four ‘R’s Asked to describe a circular economy for someone who had never heard of it, Bart Goetzee, senior group sustainability at Philips explains that it’s “an industrial system that is restorative by design which means you can focus on economic growth without the increased use of natural resources.” Essentially it’s about making more money while selling less stuff and it encompasses four different R’s, expands Mike Pitts, lead specialist in sustainability at Innovate UK, offering some practical examples. Remanufacturing (Caterpillar ReMan), repair (Unipart maintaining Sky digiboxes and Dr Marten boots for life), re-use (Rent the Runway), and recycle (M&S Shwopping). 2. According to CEO of Wrap, Liz Goodwin: 3. Terms such as GDP are meaningless measures for service-based economies, let alone circular economies, argues Innoverne’s Chris Hoskin. 4. “We are losing our repair muscles”, says Janet Gunter of social startup Restart. 5. 6. 7. 8. 9. 10.

Why Bitcoin Matters Keith Bedford/ReutersMarc Andreessen, a co-founder of the venture capital firm Andreessen Horowitz. Editor’s note: Marc Andreessen’s venture capital firm, Andreessen Horowitz, has invested just under $50 million in Bitcoin-related start-ups. The firm is actively searching for more Bitcoin-based investment opportunities. He does not personally own more than a de minimis amount of Bitcoin. A mysterious new technology emerges, seemingly out of nowhere, but actually the result of two decades of intense research and development by nearly anonymous researchers. Political idealists project visions of liberation and revolution onto it; establishment elites heap contempt and scorn on it. On the other hand, technologists – nerds – are transfixed by it. Eventually mainstream products, companies and industries emerge to commercialize it; its effects become profound; and later, many people wonder why its powerful promise wasn’t more obvious from the start. What technology am I talking about?

Twitter list: 10 top tweeters on economic transformation | Guardian Sustainable Business | The Guardian To celebrate the launch of a new area of content focused on rethinking prosperity, we’ve compiled a list of the top tweeters who are driving the issues we’ll be covering - from peace economics and new wealth metrics, to sustainable financial change. Use the comments section below to suggest any Twitter users you would recommend following, or let us know via @GuardianSustBiz. Business Alliance of Local Living Economies By connecting leaders, spreading solutions, and attracting investment toward local economies, BALLE is attempting to create real prosperity for everyone. — Be A Localist (@bealocalist)September 3, 2014Motivation of pioneers comes from loving something. SOCAP is a conference series dedicated to increasing the flow of capital toward social good, and brings together global innovators, investors, foundations, governments, institutions, and social entrepreneurs. — SOCAP Markets (@SOCAPmarkets)September 8, 2014"Business is about relationships. Jeremy Scrivens Hunter Lovins YES!

Life in a 'degrowth' economy, and why you might actually enjoy it What does genuine economic progress look like? The orthodox answer is that a bigger economy is always better, but this idea is increasingly strained by the knowledge that, on a finite planet, the economy can’t grow for ever. This week’s Addicted to Growth conference in Sydney is exploring how to move beyond growth economics and towards a “steady-state” economy. But what is a steady-state economy? Why it is it desirable or necessary? And what would it be like to live in? The global predicament We used to live on a planet that was relatively empty of humans; today it is full to overflowing, with more people consuming more resources. At the same time, there are great multitudes around the world who are, by any humane standard, under-consuming, and the humanitarian challenge of eliminating global poverty is likely to increase the burden on ecosystems still further. Meanwhile the population is set to hit 11 billion this century. Degrowth to a steady-state economy We need an alternative.