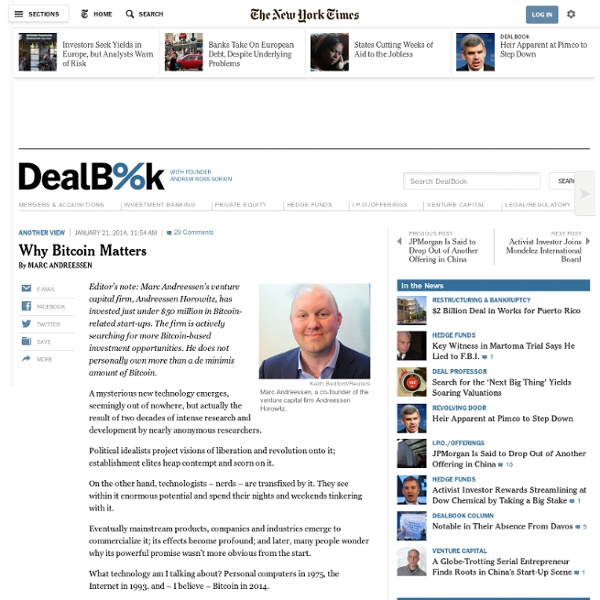 Keith Bedford/ReutersMarc Andreessen, a co-founder of the venture capital firm Andreessen Horowitz. Editor’s note: Marc Andreessen’s venture capital firm, Andreessen Horowitz, has invested just under $50 million in Bitcoin-related start-ups. The firm is actively searching for more Bitcoin-based investment opportunities. He does not personally own more than a de minimis amount of Bitcoin. A mysterious new technology emerges, seemingly out of nowhere, but actually the result of two decades of intense research and development by nearly anonymous researchers. Political idealists project visions of liberation and revolution onto it; establishment elites heap contempt and scorn on it. On the other hand, technologists – nerds – are transfixed by it. Eventually mainstream products, companies and industries emerge to commercialize it; its effects become profound; and later, many people wonder why its powerful promise wasn’t more obvious from the start. What technology am I talking about? Related:  New Economic system/trends and new paradigms

Can companies do better by doing less? | Guardian Sustainable Business In mainstream economics and politics, “growth” is a largely unquestioned good, generally associated with positive attributes like “progress” or “innovation”. “Degrowth”, on the other hand, connotes negative trends like recession, decline, unemployment and social disruption. Viewed from this angle, the idea of voluntary degrowth seems bizarre. Or, as British economist Tim Jackson puts it, “Questioning growth is deemed to be the act of lunatics, idealists and revolutionaries.” Not surprisingly, when policymakers and business leaders look for solutions to environmental and social crises, they usually focus on technology-based “growth” strategies like “green growth”, geo-engineering and carbon capture. However, a growing number of scientists have argued that growth-based technology solutions alone will not be able to stop the dramatic human overuse of nature, or eradicate poverty. Building degrowth communities – and economies The food sector is an especially fertile area for innovation.

Coinbase One of the interesting things about Bitcoin is the contrast between how it is portrayed in the press and how it is understood by technologists. The press tends to portray Bitcoin as either a speculative bubble or a scheme for supporting criminal activity. In Silicon Valley, by contrast, Bitcoin is generally viewed as a profound technological breakthrough. The Internet is based on a set of core protocols that specify how information such as text, photos, and code should be transmitted. This matters for two reasons: 1) It fixes serious problems with existing payment systems that depend on centralized services to verify the validity of transactions. 2) More importantly, Bitcoin is a platform upon which new technologies can be developed. But to proliferate widely, Bitcoin needs a killer app the same way HTTP had web browsers and SMTP had email clients. Coinbase has grown extremely fast and is now the most widely used Bitcoin service in the US.

How Uber and the Sharing Economy Can Win Over Regulators - Sarah Cannon, and Lawrence H. Summers Sharing economy firms are disrupting traditional industries across the globe. For proof, look no further than Airbnb which, at $10 billion, can boast a higher valuation than the Hyatt hotel chain. Uber is currently valued at $18.2 billion relative to Hertz at $12.5 billion and Avis at $5.2 billion. Beyond individual firms, there are now more than 1,000 cities across four continents where people can share cars. These firms bring significant economic, environmental, and entrepreneurial benefits including an increase in employment and a reduction in carbon dioxide emissions (in the case of car sharing services). However, rather than rolling out the red carpet, city governments have resisted many of these new entrants issuing subpoenas and cease-and-desist orders. Regulation is often the most significant barrier to future growth for sharing economy firms. The relationship between sharing economy firms and regulators will likely remain uneasy for the foreseeable future.

Bitcoin – The Internet of Money This post is old – I wrote it for Wired, which just published an excerpt in “The Wired World in 2014″ issue, but the article was written in July. Apologies for the obsolescence. Bitcoin will eventually be recognized as a platform for building new financial services. Most people are only familiar with (b)itcoin the electronic currency, but more important is (B)itcoin, with a capital B, the underlying protocol, which encapsulates and distributes the functions of contract law. Bitcoin encapsulates four fundamental technologies: Digital Signatures – these can’t be forged and allow one party to securely verify a transaction with another.Peer-to-Peer networks, like BitTorrent or TCP/IP – difficult to take down and no central trust required.Proof-of-Work prevents users from spending the same money twice, without needing a central authority to distinguish valid from invalid transactions. Proponents of the role of government argue that a currency with fixed supply will fail.

And what about the money? On September 15, 2008, six years ago, Lehman Brothers collapsed. Despite a “tsunami” of reforms, the financial system has not been transformed. To change finance, there might be a need to change our basic understanding of the financial system. This come-back to fundamentals has led reformers as well as central bankers to focus on money itself. Interestingly, new thinking comes with new methods of producing and spreading knowledge, and new ways of forcing ideas into the political agenda. By Fabien Hassan, guest poster* Since its creation in 2012, Finance Watch has been trying to have an impact on the regulatory agenda in Europe, and has achieved some remarkable results (see annual report for 2013). But what of the reforms that have not made it onto the mainstream legislative agenda? The role of money in macroeconomics Mainstream economics, a science which deals with prices, wealth, and production essentially claims that money doesn't matter. Who are the advocates of monetary reform?

What Bitcoin and Internet of Things Startups Have in Common Bitcoin has captivated the imaginations of many with its quasi-anonymous, hyper cost-efficient payment network. The potential for Bitcoin to change foreign exchange is hard to overstate. In the same vein, the technologies that enable the internet of things (IoT) like Bluetooth Low Energy and Apple's Beacons and Electric Imp's infrastructure will transform the way we interact with the physical world to something akin to the mall in Minority Report. The startups that bring Bitcoin and IoT to the mass-market won't declare themselves Bitcoin companies or connected devices companies. I've never seen a computer marketed as a TCP/IP machine or a bank that promotes the ACH compatibility of its checking accounts or a social network trumpet its H.264 codec support. I doubt I ever will because supporting a protocol isn't a value proposition that attracts end users. I suspect the first mass-market successful Bitcoin company won't have Bitcoin (or any subset of the word) in its name.

“The circular economy is the basis of a new EU industrial policy” | Europe’s World The European Commission’s paper “For a European Industrial Renaissance” underlines the importance of boosting manufacturing industry’s share of the EU’s GDP to around 20% by 2020 from 15% today. To reach that, adjustments to the regulatory framework will be vital. Although derided sometimes as the “old continent”, Europe is nevertheless very well placed to kick-start a new industrial era around the world thanks to its wealth of productive infrastructure, its skilled workforce and innovation capital. But first, what must Europe, as cradle of the industrial revolution, do to re-invent itself and re-think the future? Faced with unprecedented price rises and volatility on commodities markets, Europe’s industrial economy needs tangible solutions if it is to be at the forefront of globalisation. “The throughput economy has since the industrial revolution been based on a take-make-dispose flow of resources and energy no longer provides the socio-economic solutions we need”

The Sharing Economy on the Collaborative Commons The following essay is excerpted from The Zero Marginal Cost Society: The Internet of Things, the Collaborative Commons, and the Eclipse of Capitalism, by Jeremy Rifkin and appears at Common Dreams with permission. A powerful new economic movement has taken off overnight. A younger generation is beginning to share goods and services on a global Collaborative Commons. Much of what we own goes unused some of the time. Like other shareable brokers, Airbnb gets only a small cut from the renter and owner for bringing them together. Airbnb is a private firm operating in a shared Internet Commons. Couchsurfing also differentiates itself from its more commercial competitor, Airbnb, by viewing its mission more broadly as social rather than commercial in nature. Toy rentals have also enjoyed success as sharable items. Even clothes, the most personal of all physical items, are metamorphosing from a possession to a service. While rentables are booming, so too are redistribution networks.

10 Things I Think I Think on Bitcoin I’m relatively late to Bitcoin. I’m probably more current than 99.9% of the general population but less informed than the hackers, hobbyists and investors who have been studying this since its inception in early 2009. I’m no payment systems or cryptography expert. So I went back to first principles and studied the Khan Academy lectures here during this past summer. With that as a backdrop, here are 10 things I think I think; the format is one I’ve used before and a hat tip to Peter King, whose Monday morning column I read religiously. I think Bitcoin is just a bet that the world becomes more multipolar. Kudos

Economic Shift: The Rise of the Collaborative Commons | Big Think | Think Tank “We are just beginning to glimpse the bare outlines of an emerging new economic system--the collaborative commons,” explains economist Jeremy Rifkin, the New York Times bestselling author of The Zero Marginal Cost Society. In our new series on disruption, Rifkin discusses the forces shaping our economy and what we can expect in the years to come. “This is the first new economic paradigm to emerge on the world scene since the advent of capitalism and socialism in the early 19th century. So it's a remarkable historical event.” Rifkin is a prominent voice on the forefront of what he calls the Third Industrial Revolution, the era in which technology is shaping economies to be more energy efficient and collaborative. His research helps shape the decisions of government leaders around the world to meet the challenges of today and work towards a more prosperous, cleaner future. “What's really interesting is the trigger that's giving birth to this new economic system.

10 things we learned in recent circular economy live chat | Guardian Sustainable Business | Guardian Professional 1. The circular economy is about the four ‘R’s Asked to describe a circular economy for someone who had never heard of it, Bart Goetzee, senior group sustainability at Philips explains that it’s “an industrial system that is restorative by design which means you can focus on economic growth without the increased use of natural resources.” Essentially it’s about making more money while selling less stuff and it encompasses four different R’s, expands Mike Pitts, lead specialist in sustainability at Innovate UK, offering some practical examples. 2. According to CEO of Wrap, Liz Goodwin: For a product, the onus is on the manufacturer who needs to take care of the resources used in its products, so it keeps the metals, plastics etc in use within the product cycle for as long as possible and thinks about design for longevity, repair and re-use. 3. Terms such as GDP are meaningless measures for service-based economies, let alone circular economies, argues Innoverne’s Chris Hoskin. 4. 5. 6. 7.