06CAIRO35. Egypt: Food for a revolution. In 2008, three years before Egyptians rose up against President Hosni Mubarak, the global food crisis provided a hint of what was to come. 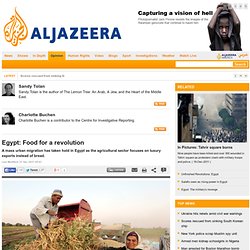 As world oil prices rose and Western countries planted ever more acres for biofuels instead of people, food prices skyrocketed. Suddenly, cooking oil, tomatoes, lentils, rice and even bread soared out of reach for many families. Authoritarian Government, Neoliberalism and Everyday Civilities in Egypt - Third World Quarterly - Volume 32, Issue 5. This contribution explores how authoritarian governmental practices come to inform everyday civilities—manners and forms of interaction among the subjects of government. 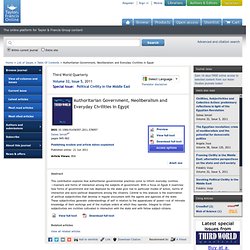 With a focus on Egypt it examines how forms of government and rule deployed by the state give rise to particular modes of action, norms of interaction and socio–political dispositions among the citizenry. Central to this analysis is the examination of political subjectivities that develop in regular encounters with the agents and agencies of the state. These subjectivities generate understandings of self in relation to the apparatuses of power—out of intimate knowledge of their workings and of the multiple orders at which they operate. Integral to citizen subjectivities are civilities cultivated in interaction with the state and with fellow subject-citizens. Related articles. Dreamland: The Neoliberalism of Your Desires. Neoliberalism is a triumph of the political imagination. 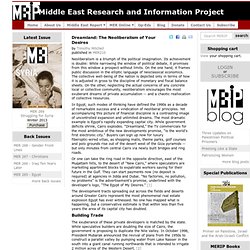 Its achievement is double: While narrowing the window of political debate, it promises from this window a prospect without limits. On the one hand, it frames public discussion in the elliptic language of neoclassical economics. Egyptian Privatization.