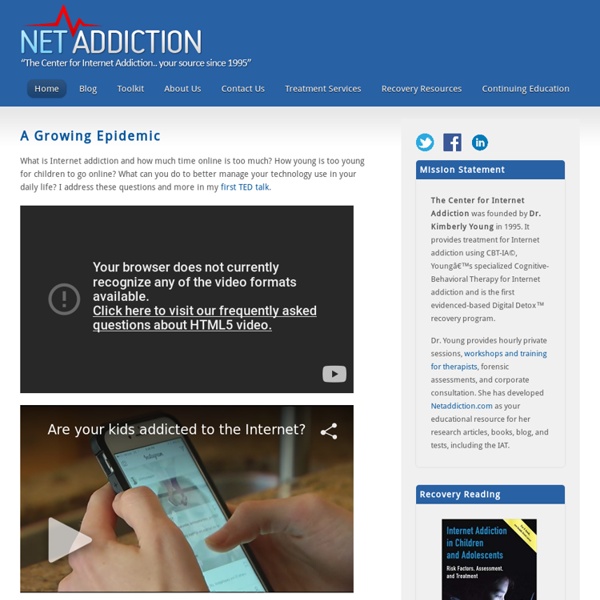 A Growing Epidemic Internet addiction was first identified in the U.S. by Dr. Kimberly Young. In 1996, she presented the first paper on the topic at the American Psychological Association’s annual conference held in Toronto entitled, “Internet Addiction: The Emergence of a New Disorder”. Since then, studies have documented Internet Addiction in Australia, Italy, Pakistan, Iran, Germany, and the Czech Republic. It is a serious epidemic in China, Korea, and Taiwan.

Cycles and Stages of Addiction Annette Nay, Ph.D. Copyright © 1997 There are three basic stages in any addictive process. First, there is a change in the thought process. Second, there is a change in how people deal with life's ups and downs and relationships with others. Internet addiction disorder - Wikipedia Internet addiction disorder (IAD), now more commonly called problematic Internet use (PIU)[1] or compulsive Internet use (CIU).[2] Other overlapping terms include Internet overuse, problematic computer use or pathological computer use – and even iDisorder.[3] These terms avoid the word addiction and are not limited to any single cause, but only reflect a general statement about excessive computer use that interferes with daily life.[4] IAD was originally proposed as a disorder in a satirical hoax by Ivan Goldberg, M.D., in 1995,[5] though some later researchers have taken his essay seriously. Other habits such as reading, playing computer games, or watching very large numbers of Internet videos or movies are all troubling only to the extent that these activities interfere with normal life. Internet addiction is a subset of a broader "technology addiction".

Managing Your Social Network Addiction Facebook, LinkedIn, MySpace, Twitter, Digg, StumbleUpon, Friendster, Tumblr, Xanga… the list goes on and on. And if you are any sort of tech savy, there is good chance you are a member of multiple social networks. Even I have accounts with at least 5 of these. While there is a lot to be gained by using these services, there is also a lot to be lost. In case you hadn’t heard, Facebook users share not only a social network of over 200 million, but also significantly lower grade point averages (GPAs) than their non-member classmates (according to Time Magazine). Podcast - How to prevent internet addiction A recent study indicates that internet addiction can lead to a weaken immune system which leads to more viruses such as the Flu. There is already documented research on how internet addiction leads to mental health issues. On this episode of the Digital Parent Podcast, Dr. David Greenfield stopped by to discuss online addiction and teens. Dr.

A Wii Fracture To the Editor: In 1990, Brasington described “Nintendinitis”1 in a patient with pain over the extensor tendon of her thumb after 5 hours of playing a Nintendo video game. Nintendo next released the highly popular Wii games console that includes a wireless remote capable of detecting movement in three dimensions.