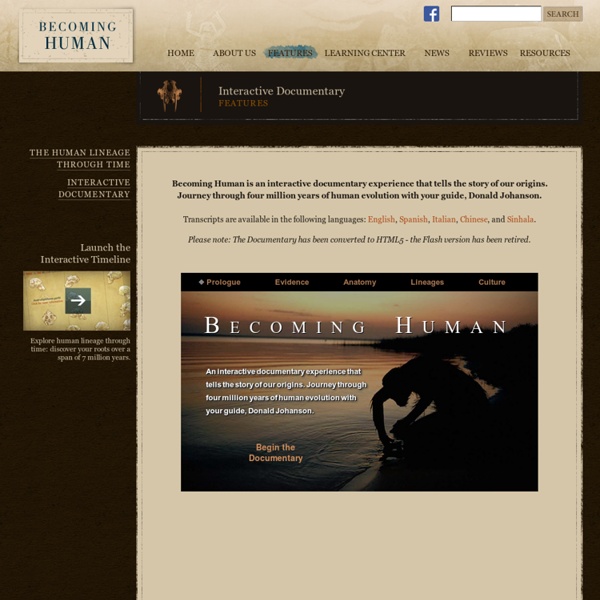 Becoming Human is an interactive documentary experience that tells the story of our origins. Journey through four million years of human evolution with your guide, Donald Johanson. Transcripts are available in the following languages: English, Spanish, Italian, Chinese, and Sinhala. Please note: The Documentary has been converted to HTML5 - the Flash version has been retired.

Introduction 1. INTRODUCTION A typical ichthyosaur looks like this (see note for derivation and pronunciation of "ichthyosaur", as well as its usage in this page). Yes, just like a fish. The strange thing is that they were not fish at all: they were reptiles like lizards, snakes, and crocodiles. You can easily tell this by looking at the skull and fins. A similar case is known for mammals too: think about dolphins and whales.

Instructional Multimedia Welcome to the Department of Biology's instructional multimedia page. This site showcases educational material that has been developed for use in departmental courses. If this is your first visit, we suggest checking to see that you have the appropriate plugins installed on your computer. Once you have the appropriate plugins you may proceed to the instructional multimedia. If you have any questions, check the FAQ page and if you can't find the answer there, you can email us. Check out some of the video work done in our lab

Ancestral Lines Evolutionary biologists use a cladogram, the treelike diagram of evolutionary branches or clades, to organize species into lines of evolutionary descent across time. Biologists use three types of evidence to deduce evolutionary connections: genetics, morphology, and geologic dating. (Behavior, normally a key part of evolutionary studies, can only be inferred in extinct species — for example, by examining the ecology in which the species flourished and the species adaptations for eating and locomotion.) Analyses of primate fossils and the genetic relatedness of living primates converge to the conclusion that humans and chimpanzees branched from a common ancestor about 7 million years ago. DNA recovered from several uncontaminated Neanderthalensis fossils indicated that modern humans and extinct neanderthals diverged about 400,000 years ago; but more recent studies show that they must have interbred within Europe or the Middle East since then.

What did our ancestors look like? Hair and eye color can be determined for ancient human remains A new method of establishing hair and eye colour from modern forensic samples can also be used to identify details from ancient human remains, finds a new study published in BioMed Central's open access journal Investigative Genetics. The HIrisPlex DNA analysis system was able to reconstruct hair and eye colour from teeth up to 800 years old, including the Polish General Wladyslaw Sikorski (1881 to 1943) confirming his blue eyes and blond hair. A team of researchers from Poland and the Netherlands, who recently developed the HIrisPlex system for forensic analysis, have now shown that this system is sufficiently robust to successfully work on older and more degraded samples from human remains such as teeth and bones. The system looks at 24 DNA polymorphisms (naturally occurring variations) which can be used to predict eye and hair colour.

The Immortal Life « Rebecca Skloot Her name was Henrietta Lacks, but scientists know her as HeLa. She was a poor black tobacco farmer whose cells—taken without her knowledge in 1951—became one of the most important tools in medicine, vital for developing the polio vaccine, cloning, gene mapping, in vitro fertilization, and more. Henrietta’s cells have been bought and sold by the billions, yet she remains virtually unknown, and her family can’t afford health insurance. Soon to be made into an HBO movie by Oprah Winfrey and Alan Ball, this New York Times bestseller takes readers on an extraordinary journey, from the “colored” ward of Johns Hopkins Hospital in the 1950s to stark white laboratories with freezers filled with HeLa cells, from Henrietta’s small, dying hometown of Clover, Virginia, to East Baltimore today, where her children and grandchildren live and struggle with the legacy of her cells.

Marvin and Milo Explore physics the exciting way, by trying out a simple and fun experiment. This month, Leaning Tower Don't forget to check back next month for the next edition... Spinning eggs Print this page What you need a raw egga hard-boiled egg Instructions First spin the hard-boiled egg. Results & explanation The egg starts spinning! Share: The folowing links are external

12 Elegant Examples of Evolution - Wired Science In preparation for Charles Darwin’s upcoming 200th birthday, the editors of Nature compiled a selection of especially elegant and enlightening examples of evolution. They describe it as a resource "for those wishing to spread awareness of evidence for evolution by natural selection." Given the continuing battles over evolution in America’s public schools — and, for that matter, the Islamic world — such a resource is most welcome. However, I’d like to suggest another way of looking at the findings below, which range from the moray eel’s remarkable second jaw to the unexpected plumage of dinosaurs. After all, it’s hard to stir passion about the scientific validity of evolution without first captivating minds and imaginations. Almost, But Not Quite, a Whale. Image: Hans Thewissen / Nature Out of the Soup. Image: Ted Daeschler / Nature Dinosaurs of a Feather. A Toothy Finding. Image: Kathryn Kavanagh / Nature The Beginnings of Bones. Natural Selection in Speciation. Lizard Games. Making Do.

Building Bodies | Becoming Human Primate Bipedalism: Understanding Standing Up <p>This site requires Javascript, please update your browser...</p><p></p> Anthropologists and evolutionary biologists agree that upright posture and the subsequent ability to walk on two legs was a crucial major adaptation associated with the divergence of the human lineage from a common ancestor with the African apes. Efficient upright walking required numerous changes in the anatomy of the limbs and pelvis and we are the result of the variations and selection pressures that forged this new ability. Main Concepts Human evolution is marked by a mosaic pattern. Assessible Objectives Students will... identify key anatomical similarities and differences between the great apes and humans.infer likely anatomical features in ancient human ancestors.list principal anatomical changes in primates necessary for adaptation to fully bipedal locomotion.sequence particular anatomical features in hominids as part of a series of broader evolutionary trends.

Unique ancient spider attack preserved in amber Researchers have found what they say is the only fossil ever discovered of a spider attack on prey caught in its web -- a 100 million-year-old snapshot of an engagement frozen in time. The extraordinarily rare fossils are in a piece of amber that preserved this event in remarkable detail, an action that took place in the Hukawng Valley of Myanmar in the Early Cretaceous between 97-110 million years ago, almost certainly with dinosaurs wandering nearby. Aside from showing the first and only fossil evidence of a spider attacking prey in its web, the piece of amber also contains the body of a male spider in the same web. This provides the oldest evidence of social behavior in spiders, which still exists in some species but is fairly rare. Most spiders have solitary, often cannibalistic lives, and males will not hesitate to attack immature species in the same web. "This was a male wasp that suddenly found itself trapped in a spider web," Poinar said.

Hybrid SHEEP AND GOATS In "The Variation Of Animals And Plants Under Domestication" Charles Darwin wrote: "Captain Hutton, in India, crossed a tame goat with a wild one from the Himalaya, and he remarked to me how surprisingly wild the offspring were." Although sheep and goats seem similar and can be mated together, any offspring are generally stillborn due to chromosome mismatch (sheep have 54, goats have 60). At Botswana Ministry of Agriculture, a ram housed with a nanny goat impregnated the goat and a live offspring was produced with 57 chromosomes. It was called "The Toast of Batswana" and is intermediate in type: coarse outer, woolly inner coat, long goat-like legs and heavy sheep-like body. The longstanding belief in sheep/goat hybrids may be due to the resemblance to each other such that some primite sheep may be misidentified as goats.