There's a Word for That: 25 Expressions You Should Have in Your Vocabulary 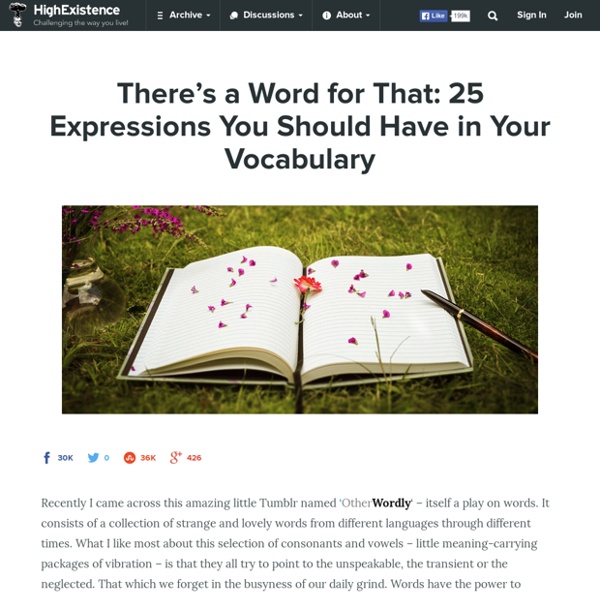 Recently I came across this amazing little Tumblr named ‘OtherWordly‘ – itself a play on words. It consists of a collection of strange and lovely words from different languages through different times. What I like most about this selection of consonants and vowels – little meaning-carrying packages of vibration – is that they all try to point to the unspeakable, the transient or the neglected. That which we forget in the busyness of our daily grind. Words have the power to remind us – and therefore we should choose our words carefully so we are reminded of the things that nourish our souls. You can find my favourite words below – pick five that resonate most, write them down, yes seriously – go grab a pen -, make sure to learn them by heart, teach them to your inner voice and share them with others to guide our collective attention to what truly matters. 1 – Sophrosyne 2 – Vorfreude pronunciation | ‘for-froi-duh 3 – Numinous 4 – Nemophilist pronunciation | ne-‘mo-fe-list 5 – Sillage

7 Things We Can All Learn from the Music and Life of John Lennon by Lori Chandler On December 8, 1980, John Winston Lennon was gunned down outside his apartment building, the Dakota, in New York City. His assailant, whose name does not bear repeating, shot Lennon five times with a .38 caliber revolver. Writer Creates “Color Thesaurus” To Help You Correctly Name Any Color Imaginable Ingrid Sundberg, a writer and children’s book illustrator, created a very useful infographic chart for anyone struggling with color names. The writer says that she loves to collect words that can help give her stories variety and depth. Show Full Text “I’ve learned that we all have different associations with color words,” Sundberg told Bored Panda. “For example the color sapphire is a light blue to me (since that’s the color of the sapphire on my engagement ring), but a sapphire can also be a very dark blue.

18 Common Words That You Should Replace in Your Writing It’s a familiar scene: you’re slumped over your keyboard or notebook, obsessing over your character. While we tend to agonize over everything from structure to backstory, it’s important to weigh how you write something too. A perfectly constructed world is flat on the page if you use feeble, common words. English Adjectives for Describing Physical Appearance - Vocabulary for Talking About How People Look attractive - a person who is very good looking. (men and women). Attractive is a word you might use to describe someone who is very nice to look at, but who is not stunningly beautiful or strikingly handsome. Example sentence: - "Princess Diana was a very attractive woman." bald - As soon as possible. A.S.A.P. is an informal expression that is used to indicate when things need to be done really quickly.

Nonconformity and Freethinking Now Considered Mental Illnesses Is nonconformity and freethinking a mental illness? According to the newest addition of the DSM-IV (Diagnostic and Statistical Manual of Mental Disorders), it certainly is. The manual identifies a new mental illness called “oppositional defiant disorder” or ODD. Defined as an “ongoing pattern of disobedient, hostile and defiant behavior,” symptoms include questioning authority, negativity, defiance, argumentativeness, and being easily annoyed. The DSM-IV is the manual used by psychiatrists to diagnose mental illnesses and, with each new edition, there are scores of new mental illnesses. Research Shows Plants Are Sentient. Will We Act Accordingly? Research continues to verify the intelligence of plants. If we begin to regard them as sentient beings, will our treatment of them improve? ©John T. Andrews Animal advocates and wildlife enthusiasts like you and me are always excited when new research comes out demonstrating the intelligence of the “others” among us; for example, how crows solve problems or whales have complex cultures. But when we cross over into the area of plant intelligence, well, it often sounds a bit too New Agey for most of us.

20 more awesomely untranslatable words from around the world If only you could use these words in Scrabble. Photo: Jeremy Mates When linguists refer to “untranslatable” words, the idea is not that a word cannot somehow be explained in another language, but that part of the essence of the word is lost as it crosses from one language to another. Synonyms for words commonly used in student's writing Amazing- incredible, unbelievable, improbable, fabulous, wonderful, fantastic, astonishing, astounding, extraordinary Anger- enrage, infuriate, arouse, nettle, exasperate, inflame, madden Angry- mad, furious, enraged, excited, wrathful, indignant, exasperated, aroused, inflamed Answer- reply, respond, retort, acknowledge Ask- question, inquire of, seek information from, put a question to, demand, request, expect, inquire, query, interrogate, examine, quiz