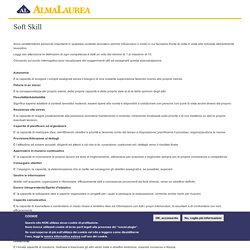 Six Soft Skills Everyone Needs. By Larry Buhl, for Yahoo! 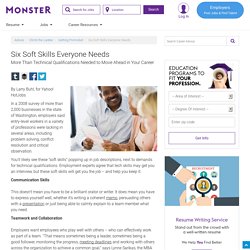 HotJobs In a 2008 survey of more than 2,000 businesses in the state of Washington, employers said entry-level workers in a variety of professions were lacking in several areas, including problem solving, conflict resolution and critical observation. You'll likely see these "soft skills" popping up in job descriptions, next to demands for technical qualifications. Employment experts agree that tech skills may get you an interview, but these soft skills will get you the job -- and help you keep it: Communication SkillsThis doesn't mean you have to be a brilliant orator or writer. Teamwork and CollaborationEmployers want employees who play well with others -- who can effectively work as part of a team. AdaptabilityThis is especially important for more-seasoned professionals to demonstrate, to counter the (often erroneous) opinion that older workers are too set in their ways.

Problem SolvingBe prepared for the "how did you solve a problem? " WHO_MNH_PSF_93.7A_Rev.2. Life skills. Enumeration and categorization[edit] The UNICEF Evaluation Office suggests that "there is no definitive list" of psychosocial skills;[3] nevertheless UNICEF enumerates many "psychosocial and interpersonal skills generally considered important". 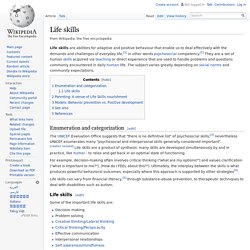 [citation needed] Life skills are a product of synthesis: many skills are developed simultaneously by and in practice, like humor - to relax and get back in an optimal state of functioning. For example, decision-making often involves critical thinking ("what are my options? ") and values clarification ("what is important to me? "), (How do I FEEL about this? "). Life skills can vary from financial literacy,[5] through substance-abuse prevention, to therapeutic techniques to deal with disabilities such as autism. Soft skills. Soft skills are a combination of people skills, social skills, communication skills, character or personality traits, attitudes, career attributes,[1] social intelligence and emotional intelligence quotients, among others, that enable people to navigate their environment, work well with others, perform well, and achieve their goals with complementing hard skills.[2] The Collins English Dictionary defines the term "soft skills" as "desirable qualities for certain forms of employment that do not depend on acquired knowledge: they include common sense, the ability to deal with people, and a positive flexible attitude. 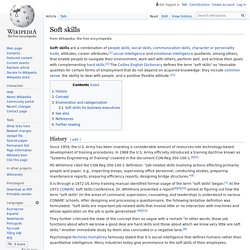 "[3] History[edit] Since 1959, the U.S. Army has been investing a considerable amount of resources into technology-based development of training procedures. It is through a 1972 US Army training manual identified formal usage of the term "soft skills" began.[7] At the 1972 CONARC Soft Skills Conference, Dr. Concept[edit] 18 Things Highly Creative People Do Differently. This list has been expanded into the new book, “Wired to Create: Unravelling the Mysteries of the Creative Mind,” by Carolyn Gregoire and Scott Barry Kaufman. Creativity works in mysterious and often paradoxical ways. Creative thinking is a stable, defining characteristic in some personalities, but it may also change based on situation and context.

Inspiration and ideas often arise seemingly out of nowhere and then fail to show up when we most need them, and creative thinking requires complex cognition yet is completely distinct from the thinking process. Neuroscience paints a complicated picture of creativity. As scientists now understand it, creativity is far more complex than the right-left brain distinction would have us think (the theory being that left brain = rational and analytical, right brain = creative and emotional). While there’s no “typical” creative type, there are some tell-tale characteristics and behaviors of highly creative people. They daydream. They “fail up.”