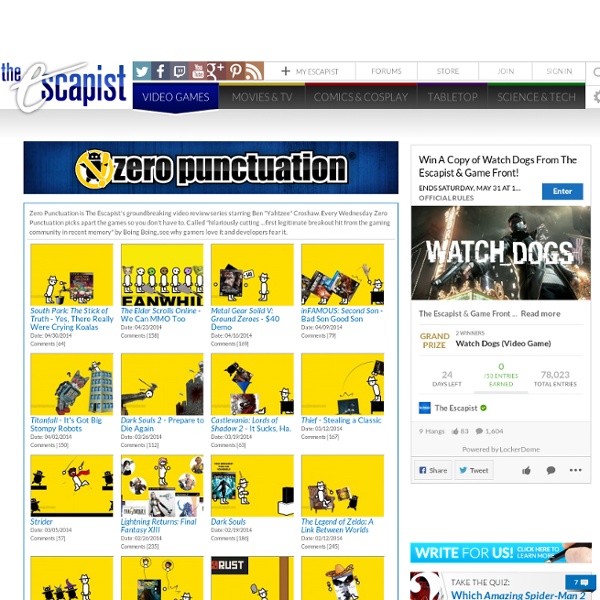 Zero Punctuation is The Escapist's groundbreaking video review series starring Ben "Yahtzee" Croshaw. Every Wednesday Zero Punctuation picks apart the games so you don't have to. Called "hilariously cutting ... first legitimate breakout hit from the gaming community in recent memory" by Boing Boing, see why gamers love it and developers fear it. South Park: The Stick of Truth - Yes, There Really Were Crying Koalas

Full list of AVGN videos Shit! This is an AWFUL GAME! And not a bad game because of the premise. “Dr. Jekyll and Mr. Season 2 and Episode 12 Bones: Brennan and Booth are called to the scene of a deadly fire at a D.C. prison to investigate what they believe is the death of Brennans incarcerated adversary, serial killer Howard Epps, whose body was found burned beyond recognition. But Brennans examination leads to the chilling realization that the charred body is not Epps, but that of a D.C. fireman Epps killed in order to fake his own death and escape from a maximum security prison amid the commotion of the fire. After paying a visit to Epps former wife, Caroline, to determine if she has any clue as to his whereabouts, Brennan and Booth leave empty-handed, but are concerned for Carolines safety with her ex-husband on the loose.

QDB: Latest 50 Quotes <No_One> Damn my land mine collection is gone. <No_One> Also so is my shed <No_One> That's gonna be fun in the morning 15 minutes later. <No_One> Fuck afk police pulled in <Dwarf> k <Dwarf> have fun 10 minutes later. The 101 Most Useful Websites on the Internet Here are the most useful websites on the Internet that will make you smarter, increase productivity and help you learn new skills. These incredibly useful websites solve at least one problem really well. And they all have cool URLs that are easy to memorize thus saving you a trip to Google. Also see: The Best Android Apps Also see: The Best Mac Apps and Utilities

Village Integration Today we got back from the villages. Our schedule is going to be Tuesday through Saturday in the villages and then Sunday and Monday we'll be in Livingston. I will say, the last five days have been really good. Between corporate and personal time with the Lord, I've been spending about three hours a day in God's presence. It's been such a blessing. Here's a little breakdown of daily life in the villages. Minecraft in REALD 3D! Kyrofox, on 15 November 2011 - 06:51 AM, said: Ugh... You guys are making me facedesk so hard... By RealD3D, he means those cheap movie-theater glasses... List of Wilfred Episodes Each episode of the series typically revolves around Wilfred helping Ryan to some achievement, the object of which serves as the title of the episode. For example, the first three episodes of the series are titled "Happiness", "Trust", and "Fear". Each also opens with a quote concerning the title, after which every word but the title disappears.[1][2]

Hang on, my love, and grow big and strong It took nine months for Iggy Pop to reply to then-21-year-old Laurence's fan letter, but really the timing couldn't have been more perfect as on the morning his thoughtful note did arrive at her home in Paris, Laurence's family were being evicted by bailiffs. Laurence recalls that moment back in 1995: "By the time I finished I was in tears. Not only had Iggy Pop received the letter I had sent him nine months before, and I could have missed his if he'd sent it a day later, but he had read the whole 'fucking' 20 pages, including the bit about my Adidas dress (a semi-innocent allusion on my part), and all the rest, my description of being the child of an acrimonious divorce with the string of social workers, lawyers, greedy estate agents and bailiffs at the door, the fear, the anger, the frustration, the love." Iggy's empathetic, handwritten response addressed Laurence's problems with both grace and eloquence, and really can't be praised enough.

Seven Unsettingly Obscure Video Games You Probably Never Heard Of Ask any recognized gamer which titles they consider memorably “scary” and you’ll often be answered with modern, conventional titles: , , , ., among many others. I don’t know about you, but I grow weary and desensitized to the clich ghost/demon/zombie style of survival-horror game play, especially when you have weapons at your disposal. Although mainstream, I enjoyed the series immensely for it’s ability to induce a chronic feeling of dread and unsettlement throughout the entire game. Similarly, games like are memorable in that a player is unable to kill enemies, only delay their attacks at the most. But what about those games that you haven’t heard of, or forgot?

Smallville HD video codec is missing: Watch Featured Movies Smallville Smallville Links Season 1 You said WHAT to your kid? #2 On Single Dad Laughing’s Facebook Page, I posted a simple question. “What is something you’ve found yourself saying to a child that you never thought you would? The answers that came in have had me rolling on the floor ever since. Here are a few of them for your uninhibited laughing pleasure. We don’t stick things in people’s butts, honey.Your arms are definitely long enough to wipe your own bottom.When we poo in the toilet it stays there!

Learn Japanese Through Videogames from 1UP It would be misleading to say that any videogame can teach you Japanese. But as a supplement to regular study and a good teacher, videogames can provide both the motivation to study harder and a way to squeeze in a little extra practice. Heck, the reason I wanted to learn Japanese in the first place was because games like Dragon Quest and Final Fantasy come out in Japan up to a year before their American releases. These days, most big titles see simultaneous international release, but Square Enix's flagship RPGs will probably always come out in their native land first, and who knows if high-quality titles like Mother 3 will ever get a formal, Western release. I chose the games in this feature not just because they can help your Japanese, but because they're genuinely fun.