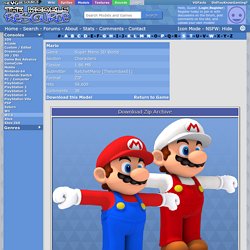 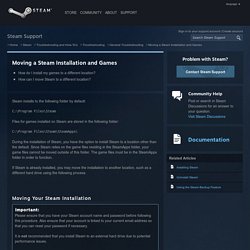 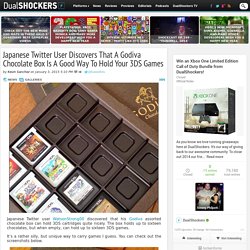 The box holds up to sixteen chocolates, but when empty, can hold up to sixteen 3DS games. It’s a rather silly, but unique way to carry games I guess. You can check out the screenshots below. Sonic Cult. Final Fantasy VII - The Big List of Mods. Mike Tyson is no match for 'Mike Tyson' in 'Mike Tyson's Punch-Out!!' How to SoftMod a Wii and play backup Wii, Gamecube and Wiiware Games. Top 50 best free games you should play today. 35. 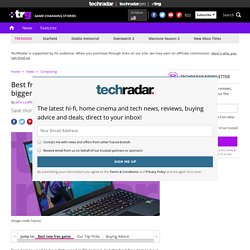 Paragon For years now, developers have tried and failed to adapt multiplayer online battle arena (MOBA) games for the TV. Now, however, if you're one of many with a computer tucked under your living room entertainment setup, Paragon may be the MOBA you've been searching for. Also available on the PlayStation 4, Paragon takes what League of Legends and Dota players have enjoyed for years and optimizes it for consoles and entertainment rigs by rotating the camera behind your character. By inciting the illusion of a traditional third-person competitive shooter, Paragon aims to broaden the appeal of not only MOBAs, but eSports as a whole. The asymmetrical maps, team-based base destruction and "hero" system are all intact. 36. Most MMOs let you say what you want in your own native tongue. In the game, you can join a crew, improve your rank and more all while speaking pirate lingo and developing new relationships.

To be over thirteen years old, Puzzle Pirates still holds up. Looking For Wii Homebrew Apps? These Are The Places To Go. Give your dusty Wii a new lease on life: find the best homebrew software for it. 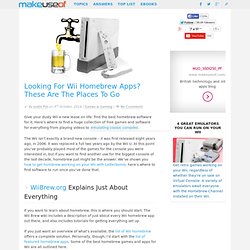 Here’s where to find a huge collection of free games and software for everything from playing videos to . The Wii isn’t exactly a brand-new console – it was first released eight years ago, in 2006. It was replaced a full two years ago by the Wii U. At this point you’ve probably played most of the games for the console you were interested in, but if you want to find another use for the biggest console of the last decade, homebrew just might be the answer. We’ve shown you how to get hombrew working on your Wii with Letterbomb; here’s where to find software to run once you’ve done that. WiiBrew.org Explains Just About Everything If you want to learn about homebrew, this is where you should start. If you just want an overview of what’s available, the list of Wii homebrew offers a complete solution. Take some time to explore and you’ll get a pretty good idea of what you can do with your Wii. Jet Set Radio Evolution: Visual Proof of Concept - Dinosaur Games. 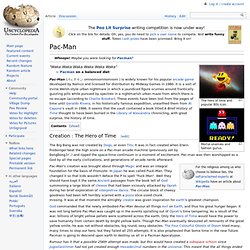 Maybe you were looking for Pacman? “Waka Waka Waka Waka Waka Waka” Pac-Man (パックマン, omnomnomnomnom ) is widely known for his popular arcade game developed by Namco and licensed for distribution by Midway Games in 1980. It is a sort of Irvine Welsh-style urban nightmare in which a jaundiced figure scurries around frantically guzzling pills while pursued by spectres in a nightmarish urban maze from which there is no escape (according to Charlie Brooker). These events have been lost from the pages of time until Geraldo Rivera, in his historically famous expedition, unearthed them from Al Capone's vault in 1986. Nostalgia Thread - 1996 Toys R Us Holiday Ad. OoT 2D - Official Website. PlaysPokemon. The upcoming run of Pokemon Red will be a Pokedex completion run by use a 151 romhack. 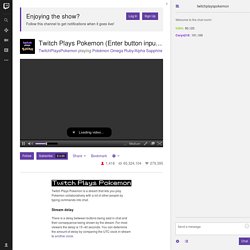 It will start in anarchy mode and democracy mode will only be enabled if a location-specific timer ticks down to zero (leaving the area will result in the timer being paused). I had previously intended this run of Red to be anarchy mode-only but I think putting democracy mode behind a substantial, non-dodgeable timer is more realistic. Overclocking a SEGA Genesis. An Interview with Scott Cawthon - The Creator of Five Nights at Freddy’s. Download Games From Newgrounds(and other sites) Extra Credits: Game Addiction (part 2) Extra Credits: How To Start Your Game Narrative. If Angry Birds were an '80s home computer game... Deus Ex: HUMN RVLN Tiger Electronics Device. Urban Legends of Video Gaming #17. NUTS FOR NINTENDO special on ABC news 20/20 from 1988. Game Theory: Why Final Fantasy is Anti-Religion. Nintendo Training 1991. Game Theory: Polybius, MK Ultra, and the CIA's Brainwashing Arcade Game. 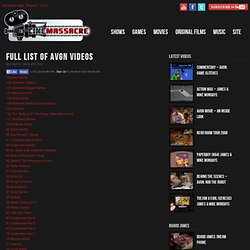 This is an AWFUL GAME! And not a bad game because of the premise. “Dr. Jekyll and Mr. Hyde”” has a very unique idea: Jekyll is simply going to a wedding. After a few hits too many he gets angry and changes into Hyde. Jeckyll = A slow pacifistic wimp needs to avoid enemies or he’ll change to Hyde. Hyde = A rampaging killing machine out of control, needs to MOW ‘EM ALL DOWN to revert back to Jekyll. Yin and Yang. You needs to kill as Hyde because, if you don’t, he’ll “catch up” to Jeckyll’s position. So it is an original style of gameplay which does make sense. It’s like playing SMB but without any running ability and can only walk half of your normal walking speed.

But that’s my take on it. it’s rare that I have to state the game mechanics but this was a rare exception. Hatoful BoyFriend - PBG. Pyongyang Racer - First North Korean Video Game. Let's Play Notte Luminosa - Part 7 - Finale. Bro-Op LP. I Have No Idea, But I Must Play - Part 3: The Secret of Nimdok. Vip & Wall Mix 1, again - 2 - tergiversatione in carnis. Metroid Prime. Let's Play Sonic the Hedgehog, But First Some Strategy. 16-Bit Gems - #30: Rise of the RPG - A History. Gaming Mysteries: Final Fantasy IV Concept (NES) UNRELEASED. Game Exchange: Pokemon Names in Japan. 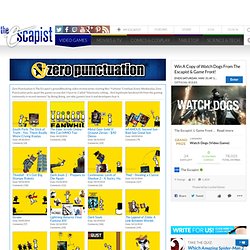 Every Wednesday Zero Punctuation picks apart the games so you don't have to. Called "hilariously cutting ... first legitimate breakout hit from the gaming community in recent memory" by Boing Boing, see why gamers love it and developers fear it. Pat the NES Punk, Sticky Floor Friday, and Random Movie/Gaming Madness. Sega Genesis (1990) Evolution of Video Games Epic Medley (Made in Mario Paint Composer) -=Secrets of Sonic Team=- NES 001! Learn Japanese Through Videogames from 1UP.

It would be misleading to say that any videogame can teach you Japanese. 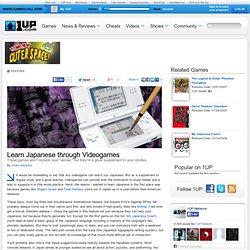 But as a supplement to regular study and a good teacher, videogames can provide both the motivation to study harder and a way to squeeze in a little extra practice. Heck, the reason I wanted to learn Japanese in the first place was because games like Dragon Quest and Final Fantasy come out in Japan up to a year before their American releases. These days, most big titles see simultaneous international release, but Square Enix's flagship RPGs will probably always come out in their native land first, and who knows if high-quality titles like Mother 3 will ever get a formal, Western release. I chose the games in this feature not just because they can help your Japanese, but because they're genuinely fun.

Except for the first game on this list, My Japanese Coach, you'll need at least a basic grasp of the Japanese language including a mastery of the language's two phonetic alphabets. The Way Games Work - Wii U GamePad. Does Video Games Rot Your Brain? or mess up ur brain. Straight Dope: What Video Games Do to Your Brain. I Was Ashamed of Being a Gamer. I Don’t Feel That Way Anymore. The Folly of Blaming Video Games - Robert VerBruggen. Hilton Ultimate Team Play (Rare PSP Game Review) - Rerez. N64 Wingman. Video Games That Converted Me From Casual Gamer To Hardcore Addict [MUO Gaming] Throughout the life of a gamer, there are certain games that make us cross over from the realm of casual gaming to being a hardcore gamer. If you look back at your gaming life, you can probably remember what the first games were that you kept coming back to.

Those were the games that you did not just pop in to play casually. Instead, these addicting games kept you coming back for hours. After hundreds of hours, you moved onto the next game, and before you knew it, you were hooked to the world of video games. When I look back, there are a few games that stand out to me as the first games that really brought me in and made me a gamer. Burn psx isos to cds (playable on psx and ps2) EVE Online is a Massive Multiplayer Online Roleplaying Space Game - EVE Online. Toy Artist Turns "Hungry Hungry Hippos" Into "Hungry Hungry Koopas"

Video Games Rot Your Brain, Study Finds. From the "Gee, who'd have guessed it? " department this morning comes an official report that video-game systems in dorm rooms equate to less study time and lower grade-point averages. In a recent study conducted at the University of Western Ontario, it was found that the mere presence of a game console in the rooms of first-year students led to 40 minutes less time spent studying per day, which resulted in GPAs .241 points lower on average. The study wasn't actually intended to analyze the impact of video games on student performance, but was instead trying to correlate study time to overall GPA. Students participating in the research tracked their time studying, sleeping, partying, working, gaming and doing other student-ly things. That time was then compared to their test scores, with the overall finding being that (surprise, surprise) more studying equates to higher grades.

However, the author of the study cautioned against parents forcing their kids to give up video games at school. Seven Unsettingly Obscure Video Games You Probably Never Heard Of. Ask any recognized gamer which titles they consider memorably “scary” and you’ll often be answered with modern, conventional titles: , , , ., among many others. I don’t know about you, but I grow weary and desensitized to the clich ghost/demon/zombie style of survival-horror game play, especially when you have weapons at your disposal. Although mainstream, I enjoyed the series immensely for it’s ability to induce a chronic feeling of dread and unsettlement throughout the entire game.

Similarly, games like are memorable in that a player is unable to kill enemies, only delay their attacks at the most. But what about those games that you haven’t heard of, or forgot? What drives my hair to stand on end has evolved over my years of playing horror games, for now I actually prefer obscure, unnerving titles that at times don’t even intend on being creepy in the first place. 7. This platform game is deceptively innocent, as the title screen so obviously suggests.

Arcade Aid. Minecraft in REALD 3D! Kyrofox, on 15 November 2011 - 06:51 AM, said: Ugh... You guys are making me facedesk so hard... By RealD3D, he means those cheap movie-theater glasses... You don't need a special monitor or special projector; all RealD is doing is just replacing the red (in red/blue glasses) with a shade of grey, and blue with a different shade of grey, therefore, they do not have to limit the film with the red+blue weirdness...