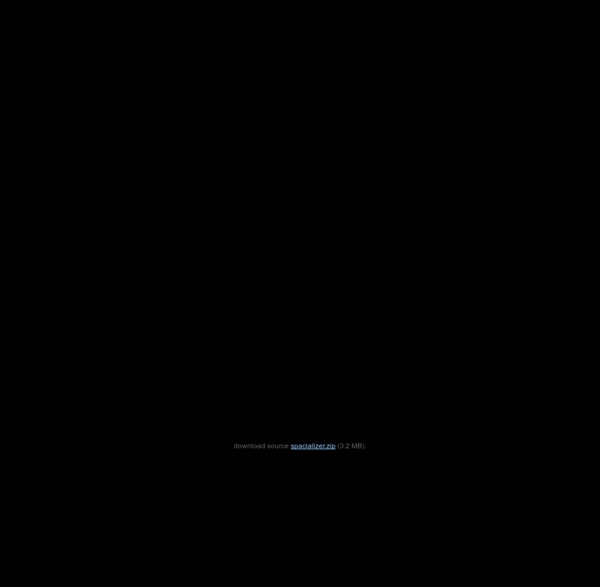 Otomata 16 Jul 2011 Click on the grid below to add cells, click on cells to change their direction, and press play to listen to your music. Update: Click here to get Otomata for your iPhone / iPod / iPad! Commute Map In Traffic: Why We Drive the Way We Do (and What It Says About Us), the author states that commute times throughout history have remained steady at roughly a half hour in each direction. Advances in transportation technology (our feet, horses, bicycles, trains, automobiles, flying cars, etc.) allow us to live farther from where we work. This got me thinking about my own commute from Berkeley to San Francisco, how it compares to those of my neighbors, and how commutes vary across the country.

WebGL Water Loading... Made by Evan Wallace This demo requires a decent graphics card and up-to-date drivers. If you can't run the demo, you can still see it on YouTube. 2048 Join the numbers and get to the 2048 tile! New Game How to play: Use your arrow keys to move the tiles. When two tiles with the same number touch, they merge into one! Zune.net The purpose of this Q&A is for Zune users to learn where to find information and support for their Zune products and services, and to learn how to take advantage of Xbox Music and Xbox Video. What’s changing with the Zune Marketplace? Zune Marketplace no longer supports rental and purchase of content, or browsing movies and TV shows. Will this impact my ability to use my Zune Music Pass? No.

Wild Mood Swings - Surf the web on a whim. (C) Sean McManus <p style="font-size:x-large;">Oh no! You don't have Javascript enabled. Please <a href=" Javascript now</a> or the only moods you'll experience will be boredom and frustration.</p><hr noshade> National Gallery of Art NGAkids BRUSHSTER Brushster is an online painting machine for all ages. This Shockwave interactive includes more than forty brushes and customizable size, transparency, texture, and stroke options. A rainbow palette, along with a toolbox of special effects that blur, ripple, smudge, blend, and fragment your designs help make Brushsterr a full-feature painting program. Brushster has a mind of its own! Click one of the green AUTO buttons and let the computer generate some paintings for you.

lapse: Imágenes de satélite Landsat de Cambio Climático, a través de Google Earth Engine TIME and Space | By Jeffrey Kluger Spacecraft and telescopes are not built by people interested in what’s going on at home. Rockets fly in one direction: up. Music Text Composition Generator ( A free online music utility) The P22 Music Text Composition Generator allows any text to be converted into a musical composition. This composition is displayed in musical notation and simultaneously generated as a midi file. 1. Usage Type or copy any text into the Text Field. X Falling Sand X Falling Sand 2 (Developed by Xavier Case) This is a improved rewrite of the original Falling Sand Game.

Juegos Crossword GameJust like an old-fashioned word search! Using the mouse and the wordlist, find and highlight the hidden English words in the box! As the levels get harder, the words start appearing in different orientations. But hurry, the clock is running! Cumulus ConfectionHigh on Mt Olympus, the Greek gods are planning their annual carnival. But alas!