Seeing the light: Ed Boyden's tools for brain hackers. This article was taken from the November 2012 issue of Wired magazine. 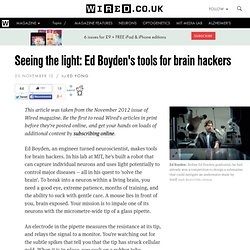 Be the first to read Wired's articles in print before they're posted online, and get your hands on loads of additional content by subscribing online. Ed Boyden, an engineer turned neuroscientist, makes tools for brain hackers. In his lab at MIT, he's built a robot that can capture individual neurons and uses light potentially to control major diseases -- all in his quest to 'solve the brain'. To break into a neuron within a living brain, you need a good eye, extreme patience, months of training, and the ability to suck with gentle care.

A mouse lies in front of you, brain exposed. An electrode in the pipette measures the resistance at its tip, and relays the signal to a monitor. If it works, you now have full access to the neuron's inner workings. Or at least you could if this technique, known as patch-clamping, were not so frustratingly hard. Boyden, 33, makes tools for brain hackers. But voyeurism is not enough. Physicists Pursue the Perfect Lens by Bending Light the Wrong Way - Wired Science. Henri Lezec, a scientist at the National Institute of Standards and Technology in Gaithersburg, Md., aligning the optical system with which he and his colleagues demonstrated 3-D negative refraction of ultraviolet light for the first time. 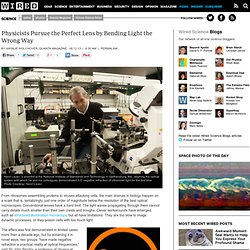 Photo Courtesy: Henri Lezec From ribosomes assembling proteins to viruses attacking cells, the main dramas in biology happen on a scale that is, tantalizingly, just one order of magnitude below the resolution of the best optical microscopes. Conventional lenses have a hard limit: The light waves propagating through them cannot carry details much smaller than their own crests and troughs. Clever workarounds have emerged, such as structured illumination microscopy, but all have limitations: They are too slow to image dynamic processes, or they poison cells with too much light. Magnetic resonance imaging. Magnetic resonance imaging (MRI), nuclear magnetic resonance imaging (NMRI), or magnetic resonance tomography (MRT) is a medical imaging technique used in radiology to investigate the anatomy and function of the body in both health and disease. 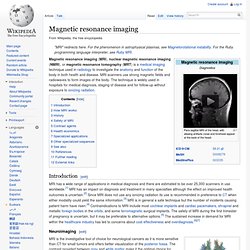 MRI scanners use strong magnetic fields and radiowaves to form images of the body. The technique is widely used in hospitals for medical diagnosis, staging of disease and for follow-up without exposure to ionizing radiation. Introduction[edit] Neuroimaging[edit] MRI image of white matter tracts. MRI is the investigative tool of choice for neurological cancers as it is more sensitive than CT for small tumors and offers better visualization of the posterior fossa. Cardiovascular[edit] MR angiogram in congenital heart disease Cardiac MRI is complementary to other imaging techniques, such as echocardiography, cardiac CT and nuclear medicine. Trained brains become more energy efficient › News in Science (ABC Science)

News in Science Monday, 5 August 2013 Bianca NogradyABC Fuel efficient A study on monkeys has called into question the fundamental assumption that an active neuron is a hungry one; an assumption that underlies brain imaging techniques such as fMRI. 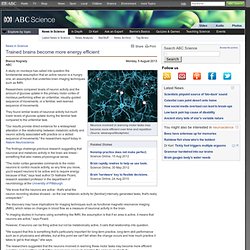 New MRI 'fingerprinting' could spot diseases in seconds. Our body tissue, not to mention diseases, each have their own unique "fingerprint," which can in turn be examined to diagnose various health issues at very early stages. 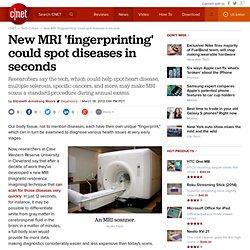 Now, researchers at Case Western Reserve University in Cleveland say that after a decade of work they've developed a new MRI (magnetic resonance imagining) technique that can scan for those diseases very quickly. In just 12 seconds, for instance, it may be possible to differentiate white from gray matter in cerebrospinal fluid in the brain; in a matter of minutes, a full-body scan would provide far more data, making diagnostics considerably easier and less expensive than today's scans.

"The overall goal is to specifically identify individual tissues and diseases, to hopefully see things and quantify things before they become a problem," Mark Griswold, a radiology professor working on the technique, said in a school news release. Diamond defects shrink MRI to the nanoscale. IBM Research A diamond surface containing nitrogen–vacancy defects (dark spots) can detect molecules on the nanoscale. 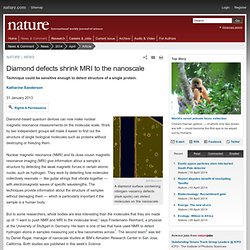 Diamond-based quantum devices can now make nuclear magnetic resonance measurements on the molecular scale. Work by two independent groups will make it easier to find out the structure of single biological molecules such as proteins without destroying or freezing them. Hack Transforms Common Microscopes Into Gigapixel Superscopes. New Method for Intracellular Temperature Mapping. A team of scientists from Japan has found a way to take a close look at the temperature distribution inside living cells. 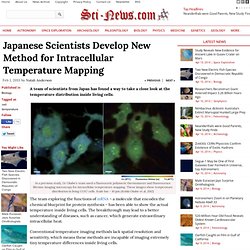 In a previous study, Dr Okabe’s team used a fluorescent polymeric thermometer and fluorescence lifetime imaging microscopy for intracellular temperature mapping. These images show temperature distribution in living COS7 cells. Scale bar – 10 μm (Kohki Okabe et al, 2012) The team exploring the functions of mRNA – a molecule that encodes the chemical blueprint for protein synthesis – has been able to show the actual temperature inside living cells. The breakthrough may lead to a better understanding of diseases, such as cancer, which generate extraordinary intracellular heat.