Explicit cookie consent. RATHER like the various theories of the universe, it is possible to imagine a European Union that goes on expanding, one that reaches a certain size then remains stable, or one that eventually implodes. 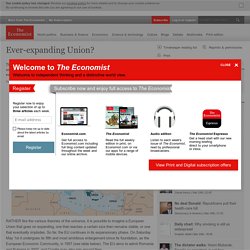 So far, the EU continues in its expansionary phase. On Saturday May 1st it undergoes its fifth and most ambitious enlargement since its foundation, as the European Economic Community, in 1957 (see table below). The EU aims to admit Romania and Bulgaria in 2007, and Croatia may also join around then. Already, there are worries that the current enlargement will prove a step too far. Getting agreement between 25 squabbling countries may prove near-impossible. However, while fears of the Union falling apart are growing, so is the queue of aspiring members—and not just among countries that geographers would call European. Tensions flare as Greece tells Turkey it is ready to answer any provocation. Fears of tensions mounting in the Aegean and eastern Mediterranean Seas reignited after the Turkish president raised the prospect of a referendum on accession talks with the EU and the Greek defence minister said the country was ready for any provocation. 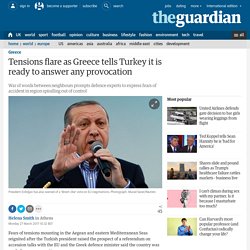 Relations between Ankara and European capitals have worsened before the highly charged vote on 16 April on expanding the powers of the Turkish president, Recep Tayyip Erdoğan. Western allies have argued that a vote endorsing the proposed constitutional change would invest him with unparalleled authority and limit checks and balances at a time when they fear the Turkish leader is exhibiting worrying signs of authoritarianism. Erdoğan has been enraged by recent bans on visiting Turkish officials rallying “yes” supporters in Germany and the Netherlands.

Highlighting growing friction between Ankara and the bloc, he raised the spectre of a public vote on EU membership at the weekend. “We have a referendum on 16 April. EU-Turkey relationship status: It's complicated - Conatus News. By Angelos Sofocleous and Scott Douglas Jacobsen Turkey’s been in the news lately, mainly because of Erdoğan, but with recent comments, detachment of Turkey from the EU, and the internal referendum of Turkey too. 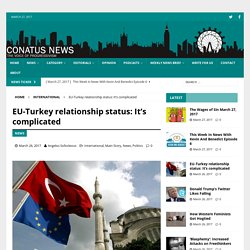 Why? After June 2016’s failed coup d’etat in Turkey, Recep Tayyip Erdoğan, the country’s President, has been increasingly trying to shut down opposing voices in an attempt to dominate his position in the political scene. In fact, a month after the alleged coup d’etat, thousands of educational institutions had been shut down and thousands of academics, prosecutors, and academics had been imprisoned, arrested or sacked. Rising Number of Turkish Nationals Seeking Asylum in Greece. 497 6Google +0 0 0 532 Following the failed military coup attempt in Turkey last July, an increasing amount of Turkish nationals have come to Greece seeking asylum, according to data at the Asylum Service. 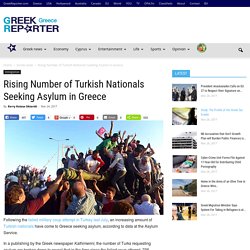 Three Million Migrants Waiting to Cross into Greece, Says EU Commissioner Avramopoulos. 1584 757Google +1 0 1 2521 While visiting Athens on Thursday, European Commissioner for Migration Dimitris Avramopoulos said that there are approximately 3 million refugees waiting to cross into Greece from Turkey in an effort to reach Western and Northern Europe. 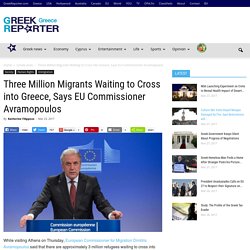 Th news comes at a time when repeated threats from Turkish President Recep Tayyip Erdogan along with many of his advisors and aides imply that the Brussels-Ankara deal might come to an end. Mr. Macedonia says it needs prospect of joining EU to thwart authoritarianism. Efforts to promote liberal politics in the Balkans will be set back if Macedonia is not offered a firm prospect of Nato and EU membership next year, the leaders of the country’s fledgling government have warned. 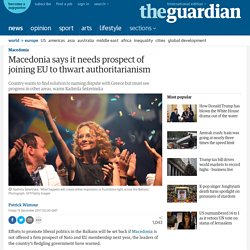 Radmila Šekerinska, Macedonia’s deputy prime minister and defence minister, told the Guardian: “The next year is crucial. We need to show that there are developments – people do not expect everything to be solved tomorrow – but they expect progress because we have been stuck for 10 years. What happens will create either inspiration or frustration right across the Balkans.” She said the six-month-old government, one of the few social-democratic success stories in Europe, wants to find a way to end the 26-year dispute with Greece over the name the Republic of Macedonia is given in international forums.

Since it became independent in 1991, the country has been referred to internationally as the Former Yugoslav Republic of Macedonia (FYROM).