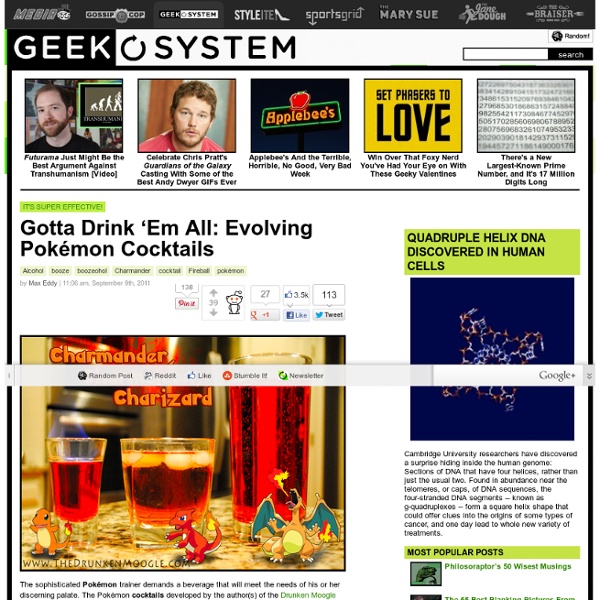 The sophisticated Pokémon trainer demands a beverage that will meet the needs of his or her discerning palate. The Pokémon cocktails developed by the author(s) of the Drunken Moogle blog do just that, with a series that include three separate drinks inspired by each of the evolutionary stages of various pocket monsters. Each series begins with a shot, moves on to a midsize drink served in a tumbler, and then a highball-sized cocktail. It’s notable that each drink builds on the previous, so the Charmeleon contains the ingredients from the Charizard, and so on. The Charmander series looks particularly interesting, partly because it uses the truly excellent Fireball cinnamon whiskey, but also because you can light them on fire. Read on below to get the recipes for this and other intriguing Pokémon cocktails, but remember: Pokémon masters always drink responsibly. (The Drunken Moogle via Geekologie)

...stumbled upon yesterday was a list of interesting drinks. | So, one of the things I... I told you guys that I'm wasting a lot of time nowadays looking at pretty pictures and interesting ideas on Pinterest.I already have a bunch of different boards for all kinds of stuff - be it food or interior design. But I especially liked the idea of someone making up Harry Potter related drinks. And then I googled the term and came up with a bunch of interesting stuff. WARNING:An Anonymous comment came that you shouldn't ingest anything that has dry ice in it. First off... For one serving you'll need:2 ounces Champagne1 ounce vodka2 ounces white grape juicePurple sugarOptional: Dry IcePour a small amount of grape juice onto a plate and a small amount of purple sugar on a different plate. The Severus Snape: 1.5 oz Cruzan Blackstrap Rum.5 oz falernum.5 oz Fernet Brancadash of lavender bittersCombine all ingredients in a mixing glass over ice. The Goblet of Fire The Lucius Malfoy 1 oz Bourbon4 oz lemonade1 slice lemonAdd ice to glassPour in BourbonTop with lemonadeGarnish with lemon

Healthy Protein Breakfast Smoothie Recipe Smooth, creamy and bursting with nutrition, protein smoothies are easy to make for a healthy breakfast option. Another nice thing about smoothies, you can customize them for your nutritional and taste preference. Whirl ingredients together in a blender at high speed and enjoy. If you are in a rush, smoothies are easily transportable. How to Build a Healthy Smoothie As a follow on to my homemade almond milk post, here is my recipe for healthy smoothies. Milk Options My basic recipe starts with easy, homemade almond milk (recipe here). One more idea, use your milk of choice and add a tablespoon of raw organic almond butter. Protein Options To the milk I add protein powder. Animal-based Options - We’ve used Jay Robb brand and love the taste of the vanilla whey powder. If you are still looking to stretch your grocery budget and protein powders seem expensive, try using half a scoop. Fruit and Fiber Options Next, I add frozen berries and a small banana (great source of potassium). Ingredients

Web’s Tastiest: Pancakes Recipes Everyone knows that breakfast is the most important meal of the day. So of course you want to get off to a good, healthy start. However, anyone with kids knows that some mornings are just too special to worry about a properly balanced meal. Cinnamon Roll Pancakes Cinnamon rolls are fantastic all on their own, so infusing them with pancake goodness is a recipe for a heavenly morning. Lemon Blueberry Pancakes Lemon and blueberry are about as perfect a pair as Sunday morning and pancakes. Apple Pancakes An apple a day will keep the dentist away, so when you shred them and throw them into a pancake batter, you’re really making a healthy choice. Nutella Pancakes Need we say more? Apple Cider Doughnut Pancakes Forget leaves and pumpkin spiced lattes, nothing says fall like apple cider doughnuts. Cake Batter Pancakes Know a breakfast lover with an upcoming birthday? Red Velvet Pancakes If you’re in the know, the term “red velvet” just makes you think “red food dye.” Gingerbread Pancakes

Thirteen Alcoholic Beverages you can Make at Home Alcohol is one of those things in life that many of us enjoy, but few of us ever try to make ourselves. Far from a stressful and complex chore, home brewing of alcoholic beverages is in fact a legal art that can be both satisfying and rewarding. Whether you want to try your hand at brewing beer, wine or spirits, its all very doable and could turn into a unique adult hobby with some practice. Below are the thirteen most commonly brewed alcoholic beverages and what home brew hobbyists use to make them. Hard Apple Cider ( image ) One of the best things about fall is the harvest of fresh apples that the brisk northern climate brings in. Strawberry Wheat Ale This home made brew combines the smooth and light qualities of a wheat ale with the unique flavor of fresh strawberries. Whiskey (image) No longer just a woodsman's hobby, home brewing fine whiskey has recently become a popular and involved art for a growing number of people known as "Whiskey Geeks." Gin ( source ) Vodka Pulque Red Wine Mead

Hiram Abiff, the True King of Egypt,1554BC The Nag Hammidi Scrolls and The Dead Sea Scrolls are another example of a treasure trove of the writings of the disciples in the 1st century AD. Dismissed by the church as heresy, they reveal a great deal of the 'spiritual' insight of the early Christians. We also have documentation of when rulers like Alexander changed history and tried to preserve everything he found in Egypt instead of trying to destroy it like the Romans did. He found what we now call the 'Emerald Tablets of Thoth' . These are a record of the words of the so-called mythical 'wisdom' God of Egypt recorded some time before 10,000 BC. In addition to this, there is a record stating that the Great Pyramid was never meant to be a burial chamber for any pharaoh but current Egyptian Authorities who are Muslim will not concede that the Egyptian culture is far older that any other culture on Earth except one. The emphasis of this site is to explore the origins of Masonry. It Begins with Knowledge: The Legacy of the Templars

Web’s Best: Whiskey Drinks Unlike The Most Interesting Man in the World, we almost always drink beer. When we don’t, however, our go to liquor is whiskey. What can we say, bourbon is neat (little whiskey humor). While we usually just pour a few fingers and relax, sometimes we like to get a tad more creative. Hot Blooded Besides sounding like the most badass fruit, blood oranges are freakin’ delicious! PDT’s Bacon Old Fashioned If PDT isn’t a cab ride away from where you live, we highly recommend making their Bacon Old Fashioned in the comfort of your own home. Double Chocolate Bourbon Egg Cream If we’d been around for the Brooklyn egg cream craze, we’d have added a little topping from our flask at the corner pop shop as well. Penicillin Just like the name suggests, this drink is good for what ails you (if what ails you is being stone-cold sober). Smoke Signals Want to impress some guests? The Fourth Down Whiskey Cocktail Greenwich Sour Milk Punch This drink is as good in a glass as it is atop some Corn Pops.

Dark Chocolate Cupcakes with Peanut Butter Frosting I have a secret that I’m about to blab. It’s about me. And it’s a doozie. It’s going to rock your world… I don’t really like cake… Shhh… Can you believe it? These cupcakes are insanely rich and moist, and are made using the same type of method used for making brownies – melted chocolate is added to a whisked mixture of eggs and sugar, and then flour is stirred in. And the frosting. Note: To make the swirls of icing, I use a 1M icing tip. One year ago: Sweet and Sour ChickenTwo years ago: Fresh Strawberry Tart More chocolate & peanut butter deliciousness: Chocolate-Covered Peanut Butter Crisp SquaresMarshmallow Crunch Brownie BarsChocolate Peanut Butter TortePeanut Butter-Fudge CheesecakeNo-Bake Cookies

Twisted Disney Princesses - GEARFUSE Why couldn’t I resist these awesome Twisted Disney Princesses pieces? Well for one, they are, indeed, awesome. Number two, some of them are almost zombie-esque and you know us. We can’t resist zombies. Have you been looking for a way to scar your 5-year-old daughter for life? Link [via] The Hidden Records - Historical lost symbol of the Solomon Key parchme (...)