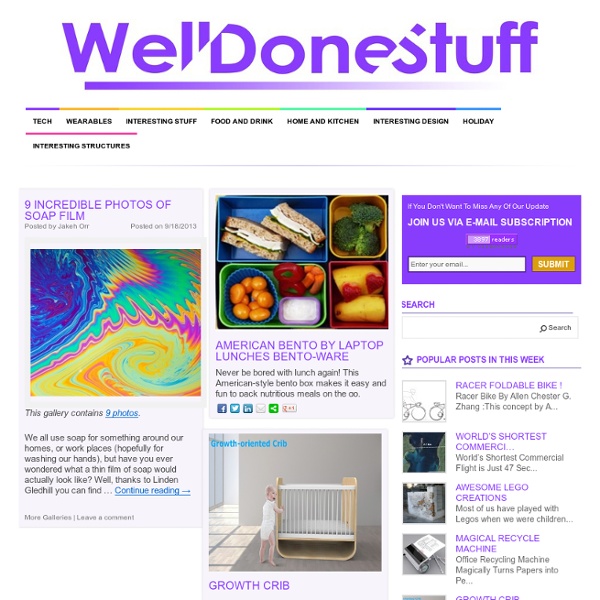 Posted by Melissa Park 23 April, 2014 Toys For Gifted Children Children can be difficult to entertain in general and this is especially true for gifted children. Highly intelligent children quickly tire of boring books and games.

500+ FREE Canning Recipes (Fruit, Veg, Jams, Jellies, Sauces & More!) If you have an abundance of fresh fruit and vegetables, canning is one of the best ways to preserve food so that they can be eaten down the line when fresh foods are more expensive or not available. Canning is also one of the most popular ways for preppers to preserve food for storage in case the SHTF one day… I have just stumbled across the canning section on food.com, I am shocked to say that I did not know that this amazing free canning resource existed… There are 100s and 100s of canning recipes covering fruit, vegetables, jams, jellies and preserves. There are even recipes for water baths and also recipes for freezing. This is by far the biggest and best free canning resource I am aware of and I highly recommend you check it out.

How To … BUILD A SOLAR PANEL W/ … SODA CANS [VIDEO If you’ve got good sun exposure on one side of your house, you can take advantage of free heat from the sun with this DIY solar heating panel, which uses old soda cans to collect and transfer the sun’s energy into your house. Sometimes, low-tech solar devices are much better than high-tech ones for home use, as they not only tend to be cheaper to make, but will also last much longer before any repairs or maintenance are necessary. And even better, they can be built in part from repurposed or recycled components, which is something you don’t see very often in new solar devices.

How To Make Birch Bark Tar: The Better Pitch Birch bark tar has been used in northern Europe as a superior glue as far back as 80,000 years. This is easy to make and is far superior than pine pitch. Considering the ease with which it can be collected and processed, Birch Tar is ideal for survival situations and homesteading. The birch bark oil looks like old, used motor oil and has a very strong smell. Build a $300 underground greenhouse for year-round gardening (Video) Growers in colder climates often utilize various approaches to extend the growing season or to give their crops a boost, whether it's coldframes, hoop houses or greenhouses. Greenhouses are usually glazed structures, but are typically expensive to construct and heat throughout the winter. A much more affordable and effective alternative to glass greenhouses is the walipini (an Aymara Indian word for a "place of warmth"), also known as an underground or pit greenhouse. First developed over 20 years ago for the cold mountainous regions of South America, this method allows growers to maintain a productive garden year-round, even in the coldest of climates. Here's a video tour of a walipini that shows what a basic version of this earth-sheltered solar greenhouse looks like inside: © Benson Institute

Concealed Carry Info » Concealed Carry Report - USConcealedCarry.net If you've decided to carry a firearm for personal protection (or even if you're just thinking about it), I applaud your decision. Most people are not willing to do what is necessary to protect themselves, their family members, and even complete strangers from the ruthless attack of a violent felon... It is critical that you realize that the MOMENT you're forced to draw your gun in self-defense there will be 100+ decisions that you'll need to make in a split second.

The Top 4 Reasons Why You’re Not Going to Survive Bugging Out to the Woods » Ready4itAll In today’s post we’re going to go over a very common and highly flawed bugout plan that many preppers have apparently chosen as their first response for most SHTF scenarios. We’re going to dissect the fundamental flaws with this plan and give some viable alternatives to bugging out to the woods. There are many reasons why bugging out just in general is probably the worst idea you can have in a real-life SHTF scenario. We went into detail about this topic in THIS article.

How to Build a Food Dehydrator - DIY When I first took up self-­reliant coun­try living in the 1960s, I tried drying foods in a sandwich of old window screens laid at a sun-facing angle across a pair of sawhorses, but found that Mother Nature dries slowly in our changeable New England weather. I also tried an antique sheet-metal wet-heat corn dry­er designed for wood-stove-top use, but its single, rusty-hard­ware cloth tray left barbecue­-marks on the apple slices. Plus, it was too small to keep up with our kids' hearty appetite for dried delicacies. In the 1970s I gave in to progress and got one of the MacManniman's big yard-­square electric food dryers.

How To Make Butter From Milk (Couldn’t Be Easier!) A while back I did the post: Make Mozzarella From Milk In Just 30 Minutes which was extremely popular! Given that so many of you liked the idea of making cheese out of milk, I am assuming that you will also like to know how to make totally delicious butter! This one I’ve got, as making butter from milk is easy! It’s even easier to make butter from cream, but I have said how to make butter from milk, so let’s stick with that for now. How To Make Butter From Milk First things first – pour one gallon of fresh full-cream milk into a container with which has a mouth wide enough for you to be able to skim the cream from the top of the milk when it forms.Now put your container of milk into the refrigerator for 12 hours or so, overnight will do.Next carefully skim off the cream that has formed on the top of the milk.

Design: Five Block Rocket Stove The Five Block Rocket Stove design and the text of this article first appeared in the PNZ Autumn 2010 Members Newsletter produced quartly for the members of Permaculture in New Zealand. As the author retains the rights to any article published it is republished here with minor changes for further dissemination and feedback The principles involved in the design of rocket stoves were invented in 1982 by Dr.