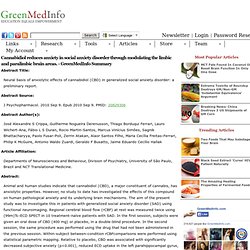 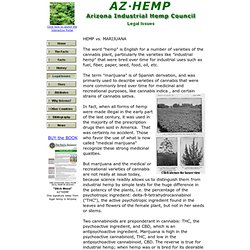 MARIJUANA The word "hemp" is English for a number of varieties of the cannabis plant, particularly the varieties like "industrial hemp" that were bred over time for industrial uses such as fuel, fiber, paper, seed, food, oil, etc. The term "marijuana" is of Spanish derivation, and was primarily used to describe varieties of cannabis that were more commonly bred over time for medicinal and recreational purposes, like cannabis indica , and certain strains of cannabis sativa. In fact, when all forms of hemp were made illegal in the early part of the last century, it was used in the majority of the prescription drugs then sold in America.

That was certainly no accident. Department of Agriculture - Plants - Industrial Hemp. What is hemp?-HEMP. Hemp is a variety of cannabis that is grown for the fiber and seeds. 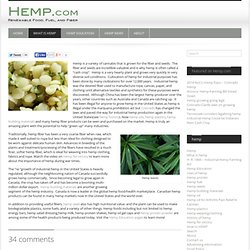 The fiber and seeds are incredible valuable and is why hemp is often called a “cash crop”. Hemp is a very hearty plant and grows very quickly in very diverse soil conditions. Cultivation of hemp for industrial purposes has been done by many civilizations for over 12,000 years. Industrial hemp was the desired fiber used to manufacture rope, canvas, paper, and clothing until alternative textiles and synthetics for these purposes were discovered.

Although China has been the largest hemp producer over the years, other countries such as Australia and Canada are catching up. Hemp leaves Traditionally, hemp fiber has been a very coarse fiber when raw, which made it well suited to rope but less than ideal for clothing designed to be worn against delicate human skin. CBD: Marijuana Compound Has No High, But Relieves Pain. ​Scientists at Temple University in Philadelphia who are exploring the medical benefits of cannabidiol (CBD), a marijuana compound that does not produce the high associated with THC, have found that it's effective in helping prevent neuropathic pain. 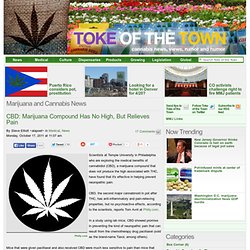 CBD, the second major cannabinoid in pot after THC, has anti-inflammatory and pain-relieving properties, but no psychoactive effects, according to the scientists, reports Tom Avril at Philly.com. In a study using lab mice, CBD showed promise in preventing the kind of neuropathic pain that can result from the chemotherapy drug paclitaxel (sold as the brand-name Taxol, among others). The surprising story of medical marijuana and pediatric epilepsy: Josh Stanley at TEDxBoulder. Medical Marijuana Pancreatic Cancer Treatments. Pancreatic Cancer- What is pancreatic cancer? 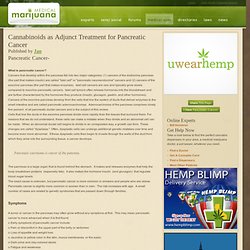 Pancreatic carcinoma is cancer of the pancreas. The pancreas is a large organ that is found behind the stomach. Symptoms A tumor or cancer in the pancreas may often grow without any symptoms at first. Presentation Pancreatic cancer facts 1. 2. EndoCannabinoids: Marijuana-Like Chemicals that Spark Bliss. It has taken neuroscientists decades to isolate the chemicals in our brains that help to create a blissful or ‘altered’ state, such as those induced by cannabis, for example. 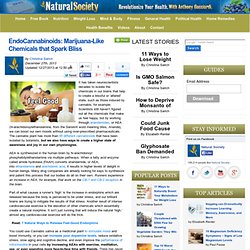 Scientists still haven’t figured out all the chemicals that make us feel happy, but by working through anandamides, or AEA (N-arachidonoylethanolamine, from the Sanskrit word meaning bliss, Ananda), we can boost our own moods without using over-prescribed pharmaceuticals. The cannabis plant has more than 85 different cannabinoids that have been isolated by botanists, but we also have ways to create a higher state of awareness and joy in our own physiologies. AEA is synthesized in the human brain by N-arachidonoyl phosphatidylethanolamine via multiple pathways. When a fatty acid enzyme called amide hydrolase (FAAH) converts anandamide, or AEA, into ethanolamine and arachidonic acid, it results in higher levels of delight in human beings. 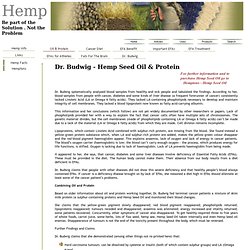 Budwig - Hemp Seed Oil & Protein Dr. Budwig systematically analyzed blood samples from healthy and sick people and tabulated the findings. The Health Benefits of Hemp Oil. You are here: Library Hemp Oil ...plus all the latest news and offers We respect your privacy and will not pass on your details. 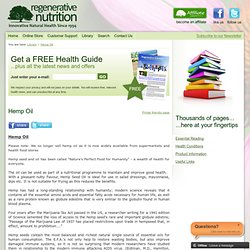 You will receive free, relevant health news, and can unsubscribe at any time. Hemp Oil Please note: We no longer sell hemp oil as it is now widely available from supermarkets and health food stores.