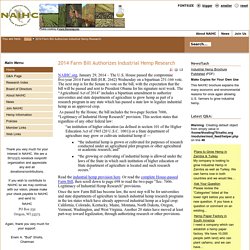 House passed the compromise five-year 2014 Farm Bill (H.R. 2642) Wednesday on a bipartisan 251-166 vote. The next step is for the Senate to vote on the bill, with the expectation that the bill will be passed and sent to President Obama for his signature next week. The “Agricultural Act of 2014” includes a bipartisan amendment to authorize universities and state departments of agriculture to grow hemp as part of a research program in any state which has passed a state law to legalize industrial hemp as an approved crop. As passed by the House, the bill includes the two-page Section 7606, “Legitimacy of Industrial Hemp Research” provision. This section states that regardless of any other federal law: “an institution of higher education (as defined in section 101 of the Higher Education Act of 1965 (20 U.S.C. 1001)) or a State department of agriculture may grow or cultivate industrial hemp if — Directory by Campus. Growing Industry: CSU researching industrial hemp – Rocky Mountain Collegian.

Colorado State University is one of few universities in the country that can legally grow and research hemp. 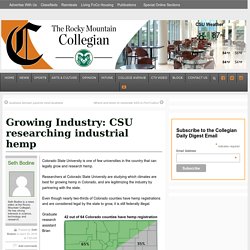 Researchers at Colorado State University are studying which climates are best for growing hemp in Colorado, and are legitimizing the industry by partnering with the state. Even though nearly two-thirds of Colorado counties have hemp registrations and are considered legal by the state to grow, it is still federally illegal. (Infographic by Jonathan Garbett.) Graduate research assistant Brian Campbell said there are an estimated 2,500 uses for the plant, such as harvesting for cannabidiol (or CBD) for medical purposes, using seeds for food and utilizing stalks for textiles and for industrial uses such as concrete and insulation. Agricultural Experiment Station. CSU researchers investigate industrial hemp. Plant with practical uses Colorado State University is starting to research hemp, a plant with practical uses such as the creation of textiles, soaps and oils that can also be used in the production of a range of pharmaceutical compounds. 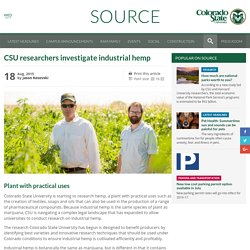 Because industrial hemp is the same species of plant as marijuana, CSU is navigating a complex legal landscape that has expanded to allow universities to conduct research on industrial hemp. The research Colorado State University has begun is designed to benefit producers by identifying best varieties and innovative research techniques that should be used under Colorado conditions to ensure industrial hemp is cultivated efficiently and profitably. People - The Kane Lab. National Hemp Association – Tribal Hemp and Cannabis Summit Held in Albuquerque. ALBUQUERQUE, N.M. 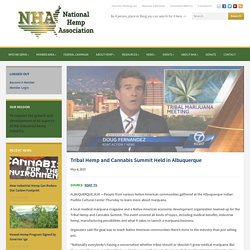 —People from various Native American communities gathered at the Albuquerque Indian Pueblo Cultural Center Thursday to learn more about marijuana. A local medical marijuana magazine and a Native American economic development organization teamed up for the Tribal Hemp and Cannabis Summit. The event covered all kinds of topics, including medical benefits, industrial hemp, manufacturing possibilities and what it takes to launch a marijuana business. Organizers said the goal was to teach Native American communities there’s more to the industry than just selling pot. 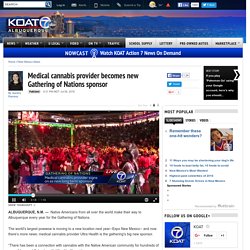 —Native Americans from all over the world make their way to Albuquerque every year for the Gathering of Nations. The world's largest powwow is moving to a new location next year--Expo New Mexico-- and now there’s more news: medical cannabis provider Ultra Health is the gathering's big new sponsor. “There has been a connection with cannabis with the Native American community for hundreds of years,” Leonard Salgado, with Ultra Health, said. KOAT spoke with Gathering of Nations organizer Derrick Matthews who said they've had health and dental clinics at previous powwows. He said this sponsorship is similar and will provide more health and treatment options to the Native American community.

“It's been used for medicinal purposes throughout the United States, particularly in Indian country,” Salgado said. Ultra Health hasn't had as much luck getting into other big New Mexico events. “It was not a good fit at this time. Hemphasis.net ~ Alex White Plume. Wahupta Ska Pejuta Jeremy Briggs profiles Alex White Plume, the only farmer to plant, cultivate, produce, sell and deliver a hemp crop within the borders of the USA since 1968. 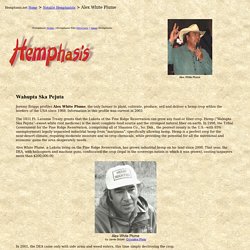 Information in this profile was current in 2003. The 1851 Ft. Laramie Treaty grants that the Lakota of the Pine Ridge Reservation can grow any food or fiber crop. Hemp ("Wahupta Ska Pejuta"--sweet white root medicine) is the most complete food source and the strongest natural fiber on earth. Alex White Plume, a Lakota living on the Pine Ridge Reservation, has grown industrial hemp on his land since 2000. In 2001, the DEA came only with side arms and weed eaters, this time simply destroying the crop. In 2002, Alex and his family again planted fields of industrial hemp, but were unable to complete their contract by delivering the crop to the Madison Hemp and Flax Co., because U.S.

A New Paradigm For Industrial Hemp Farming On Tribal Lands.